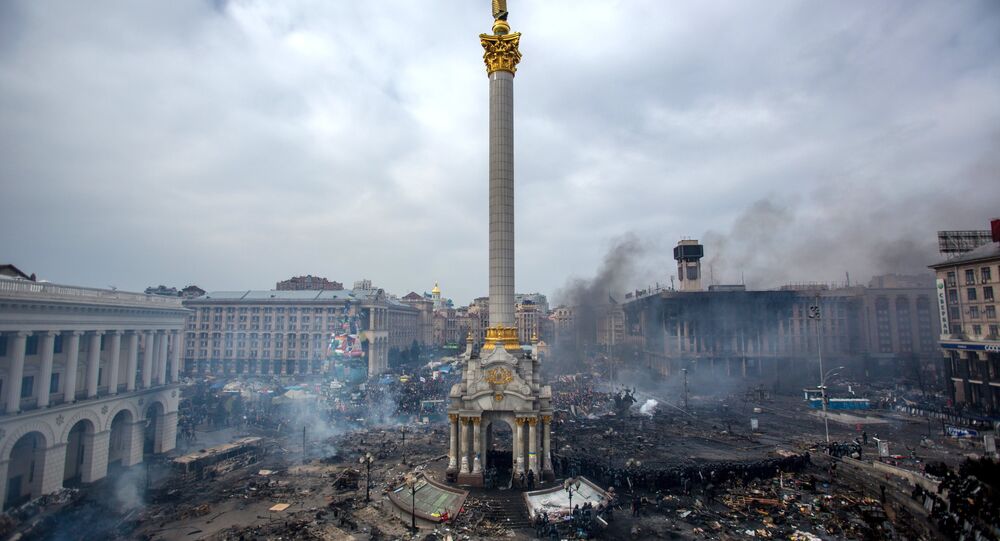 Ukrainian analyst from the Kiev-based Center for Social and Labor Research (CSLR) Volodymyr Ishchenko presented research about the role of far-right activists participation in Maidan.

MOSCOW, November 12 (Sputnik), Ekaterina Blinova — While the West is still in denial about the fact that Ukrainian far-right radicals played a crucial role in Euromaidan protests, new research carried out by the Kiev-based Center for Social and Labor Research (CSLR) highlights the deep involvement of ultranationalists in the Ukrainian turmoil of 2013-2014 which has recently escalated into a civil war.

"The preliminary analysis indicates that the far right's participation in Maidan was anything but insignificant. The far right groups were the most visible identified collective actors among Maidan participants, with the largest share of reported participation in Maidan protest events and specifically in violent events, which had a crucial significance and usually attracted the most attention," emphasizes Volodymyr Ishchenko in his report "Maidan, the Right-Wing and Violence in Protest Events Analysis," presented during the annual Danyliw Research Seminar 2014 at the University of Ottawa in October 23-25.

According to the CSLR data, during the whole "Maidan period," which started on November 21, 2013 ("when the first Euromaidan camp began in the evening") and ended on February 23, 2014 – "Sunday of the last week of Viktor Yanukovych's rule" – the far right Svoboda party had been the most active agent of the social unrest. The party was mentioned in about 18 percent of the protests in support of Maidan. Interestingly, the Svoboda party and Right Sector were much more often involved in acts of violence ("direct damage to people or property") than other agents  during Maidan. Ultranationalists from Right Sector participated in 16 percent of all violent acts; Svoboda's party members in 10 percent; Maidan Self-Defense took part in 7 percent of violent protests, while other parties were reported in less than 3 percent of violent events each, the CSLR data indicates.
The research group has been collecting data on Ukraine's protest activities and monitoring "almost 200 national, regional and activist web-media sources" since 2009. Analyzing the results of the comparative analysis, Volodymyr Ishchenko, a CSLR researcher, claims that "Svoboda was the most active political party in protest events from 2010, and increased its protest activity from year to year both in absolute numbers and in relative share of total number of protest events (from 12% in 2010 to 17% in 2013)."

The roots of the longstanding cooperation between Svoboda and the Ukrainian opposition lie in the period of Viktor Yushchenko's rule. Svoboda, the self-proclaimed heir of OUN (Organization of Ukrainian Nationalists), an infamous Nazi collaborator, was initially founded in Lviv in 1991 as the Social-National Party of Ukraine. Oleh Tyahnybok, who became the leader of the movement in 2004, renamed the party as the All-Ukrainian Association Svoboda and removed the traditional Nazi SS symbols (particularly, the "Wolfsangel" or the "Wolf’s hook") from their regalia in order to get rid of the extremist image. Ukrainian President Viktor Yushchenko, who came to power during the first Maidan of 2004, recruited Tyahnybok into the Nasha Ukrainia ("Our Ukraine") parliament faction. "By recruiting Tiahnybok, who had run as an independent candidate, into the Nasha Ukraina faction of the Verkhovna Rada, Yushchenko provided Svoboda a certain legitimacy," writes Per A. Rudling, a Swedish-American historian and an Associate Professor of the Department of History at Lund University, in his article "The Return of the Ukrainian Far Right The Case of VO Svoboda." Yushchenko directly facilitated the emergence of the Ukrainian far-right, white-washing the crimes committed by the OUN and Banderites during the World War II, the professor stresses.

While in the Verkhova Rada, the Nasha Ukraina faction formed a coalition with the Tymoshenko-led Batkivshchyna. Viktor Yushchenko, Yulia Tymoshenko and Vitali Klitschko all played active roles in the first Ukrainian Maidan of 2004, also known as the "Orange Revolution".
As the self-styled "orange opposition" lost its dominance after the victory of their main rival Viktor Yanukovych and the "Party of Regions" in 2010, it strengthened its partnership with Svoboda. "These parties were possibly interested in the higher mobilization potential of Svoboda, which had more ideological activists and a wider network of genuinely committed local activist cells," notes Volodymyr Ishchenko. Indeed, since its formation the Svoboda movement has been supporting the "autonomous nationalists", a collection of violent neo-fascist groups, writes Professor Per A. Rudling. He cites Yuriy Mykhalchyshyn, Tyahnybok's adviser, who claimed in 2011: "Our Banderite army will cross the Dnipro and throw that blue-ass gang [Yanukovych's Party of Regions], which today usurps the power, out of Ukraine…. That will make those Asiatic dogs shut their ugly mouths."
Yushchenko's legacy and moderate opposition policy towards Svoboda "legitimized" the Ukrainian far-right as "a part of "normal" Ukrainian politics without any serious challenge to their reactionary and anti-democratic ideology," Volodymyr Ishchenko stresses. This resulted in the  the far-right Svoboda party unexpectedly gaining  37 seats (of 450) in Ukraine's Verkhovna Rada in 2012.

olodymir Ishchenko emphasizes that the moderate opposition has allowed the far-right to hijack the Euromaidan protest and shape its radical rhetoric. This has allowed Svoboda "to play the most visible role in Maidan protests," the researcher elaborates. On the other hand, the involvement of the Ukrainian far-right groups in the protests compromised Euromaidan in the eyes of southeastern Ukrainian provinces and formed "the ground for the civil war," the expert claims.

Remarkably, according to the CSLR analysis of the regional diversity of the Maidan protest movement, the highest far-right participation in local maidans was registered in the East of Ukraine and in Donbass. However, the tendency does not reflect the regional support for the far-right, the researcher points out, "Where the local majority was against Maidan, the more the local maidans were dependent on the organized structures of the opposition parties, including Svoboda." The far-right tried to maintain their control over the eastern regions, which traditionally voted for Yanukovych and the Party of Regions. Both opposition parties and the far-right always had a "very low level of trust from the residents" there. The violent tactics of ultranationalists pushed easterners away from Maidan and delegitimized the movement, splitting the nation into the two confronting camps, the expert notes.

After the victory of Yanukovych's opposition, the new ruling elite has begun to distance itself from Svoboda and the paramilitary Right Sector. Although the ultranationalists’ participation in the operations in eastern Ukraine has been hailed by Kiev, Svoboda has been essentially "expelled" from the Verkhovna Rada after the latest parliamentary elections. The far-right parties have not broken the 5% barrier: Svoboda received only 4.71 percent of votes while Right Sector received only 1.8 percent. On the one hand, the radical slogans and violent tactics of the far-right might scare the Ukrainian electorate; on the other hand, the new elites, seeking the approval of the West, are embarrassed to continue cooperating with ultranationalists.

However, the well-armed and well-trained paramilitary far-right groups still play an important role in the social and political life of Ukraine. "We should not forget about other dimensions of the far right influence on Ukrainian politics beyond electoral results," Volodymir Ishchenko warns. He underscores that the far-right have made a serious impact on Ukraine's socio-political discourse, mainstreaming the nationalist subculture slogans, popularizing the radical figures of Bandera and the OUN, and increasing military potential, which could be used against the Ukrainian state, the expert elaborates.

In Ukraine There May Yet Be Another Maidan in the Immediate Future: Expert