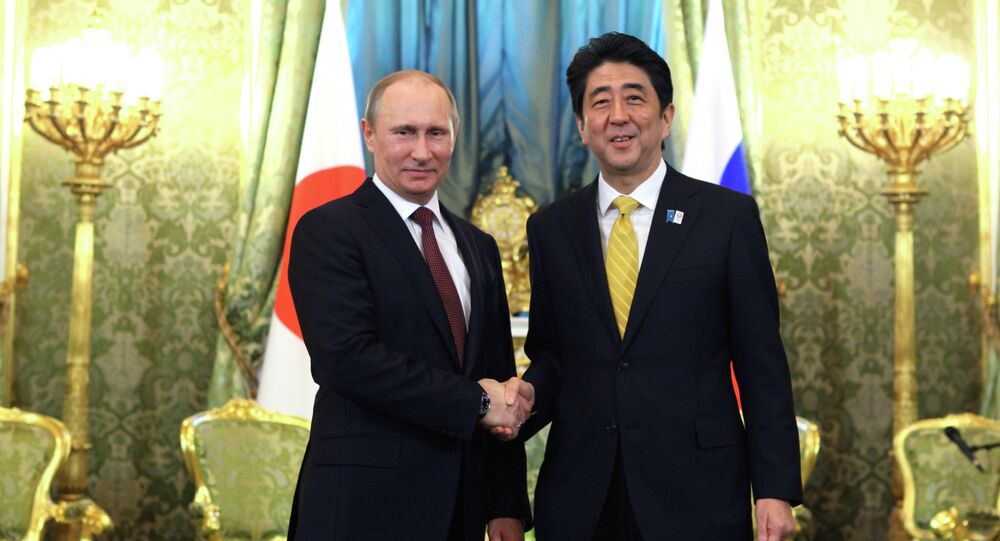 If Stronger Moscow, Tokyo to Benefit, Ties Yet to Develop: Experts

MOSCOW, November 10 (Sputnik), Daria Chernyshova — The signs of improved relations between Moscow and Tokyo give rise to hope of stronger bilateral ties that have the potential to boost an economic partnership which is currently underdeveloped, experts told Sputnik on Monday commenting on the results of a recent meeting between Russian President Vladimir Putin and Japanese Prime Minister Shinzo Abe on the sidelines of the Asia-Pacific Cooperation (APEC) summit in Beijing.

“Both Japan and Russia would benefit from a more flexible and rewarding strategic relationship,” a senior fellow for Japan studies at the Council on Foreign Relations (CFR) Sheila Smith said, adding that in a changing East Asia, both Putin and Abe need more options.

“Economically, their partnership is under developed. Both have interests in expanding energy ties, but could expand in a more meaningful way their economic cooperation if a peace treaty was concluded. The annexation of the Crimea and continued Russian intervention in Ukraine, however, has set back that objective.”

Following the reunification of Crimea with Russia, Japan joined Western countries and imposed sanctions against Russia, thus becoming the only other APEC country besides the United States that introduced sanctions. Though between 2012 and the beginning of 2014, bilateral ties were becoming closer James Brown, professor with Temple University told Sputnik that the sides are aiming to return to that positive atmosphere.

“There are strong economic and security incentives for closer ties, but this is also a reflection of the leaders’ personal interests,” Brown said, adding that Abe has invested heavily in developing bilateral relations with Russia. “If Abe could indeed deliver a resolution to the territorial dispute with Russia, it would also be a historic achievement for the Japanese leader.”

“Such factors ensure that bilateral relations are likely to progress as soon as external conditions permit. The problem, however, is the situation in Ukraine. So long as the crisis continues, causing ever greater tensions between the West and Russia, it will be impossible for Japanese-Russian relations to fully resume their positive trend,” Brown told Sputnik.

Brown believes that Tokyo’s decision to impose sanctions on Moscow was in fact not because of Ukraine per se, but due to pressure from Washington who is “Japan’s principal security guarantor.”

“Japan felt that it had little option but to support the United States in introducing sanctions against Russia. The Abe administration did signal its relative lack of commitment to the sanctions, however, by introducing much weaker measures than its American or European counterparts,” Brown told Sputnik.

In 2013, trade volumes between Japan and Russia hit a record high and exceeded $35 billion. When sanctions were introduced earlier this year, bilateral trade dropped by 1.9 percent during the first 8 months of the year.

“Once the sanctions are lifted, however, I would fully expect trade volumes to return to growth,” Brown said.

Following Japan’s 2011 nuclear disaster, trade relations between the two grew more important and Japan closed all its nuclear power plants, and started to import most of the natural gas it needs from Russia.

“One particular idea in this regard is the proposal to build a gas pipeline from Sakhalin to Honshu, Japan’s main island. As for the Russian side, the main interest is in attracting high-tech Japanese investment to help modernize the economy and accelerate the development of the Russian Far East.”

Sheila Smith reiterated saying that the countries have mutual interest in the sphere.

“Russia too wants to expand its Asian energy customers so there is a mutual interest there. Japanese investment in Russia is large but with closer political ties it could be higher,” Smith stressed.

On Sunday, Putin and Abe discussed Russian leader’s visit to Japan and the crisis in Ukraine. The two confirmed their commitment to reaching a postwar peace treaty between the two nations, and agreed to continue cooperation on a wide range of issues, including “a long list of trade and economic cooperation projects that was compiled on the heels of the Japanese premier’s last visit to Russia.”

“If the situation in Ukraine is resolved, then it makes sense,” Sheila Smith said commenting on Putin’s upcoming visit to Japan.

“This visit was originally expected to occur in autumn 2014, but was delayed due to the Ukraine crisis. When the visit does eventually take place, it will certainly be very positive for bilateral relations,” James Brown said.