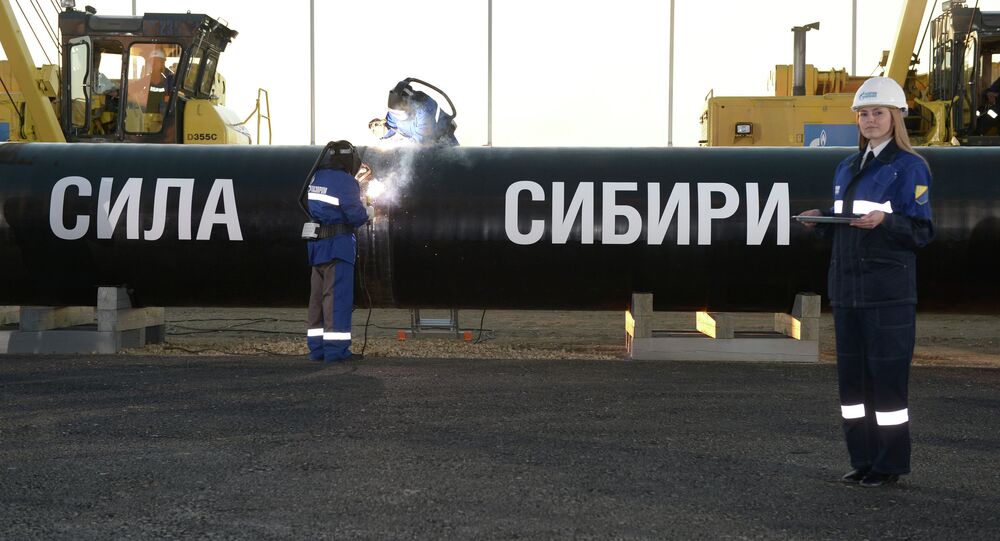 The Russian-Chinese gas deal will benefit Beijing more if Moscow does not normalize its relations with the West.

MOSCOW, November 10 (Sputnik) — Russia yesterday struck a second massive gas deal with China in an attempt to ease the negative economic impact of the current political standoff with the West; however, mutual benefits of the agreement should not be expected soon.

The newly concluded deal provides China with a yearly supply of an additional 30 bln cubic meters (bcm) of Russia’s natural gas with a preliminary start date set on 2019. The gas will be delivered by the Altai pipeline, which is yet to be built. This new agreement adds to the Russian-Chinese $400-billion gas deal concluded this May, under which Russia will provide China with an additional 38 bcm of gas per year, according to a Reuters report.

The ‘memorandum of understanding’ was signed in Beijing by representatives of Russia’s state-controlled natural gas producer Gazprom and the state-owned China National Petroleum Corporation (CNPC) after negotiations between Russian leader Vladimir Putin and his Chinese counterpart Xi Jinping  just the day before the APEC summit hosted by mainland China.

Russia’s inducement to conclude energy deals with China stems from Moscow’s desire to diversify exports amid the ongoing squabble with the West over Ukraine. The European Union is taking decisive measures to reduce Russia’s share on the European natural gas market. The EU’s overall energy consumption fell by 0.4% in 2013, and Russia’s share in the EU’s imports of natural gas was only 17.6% that year, according to Eurostat, while in 2007, Russian supplies comprised 38.7% of EU’s gas imports.

China, in turn, is one of the world’s largest energy importers, and when both projects are complete, Russia will be the biggest player on the Chinese domestic energy market. China’s willingness to conclude energy deals with the isolated Russia was motivated mainly by political and diplomatic considerations.

The gas agreements “will make Russia rely more on China both economically and politically,” Lin Boqiang of Xiamen University said as quoted by Bloomberg.

Under the newly concluded deal, Russian gas supplies will reach China via the so-called ‘western’ pipeline in the Altai Mountains. A previous deal, struck in May, will see Russia streaming gas via the “Power of Siberia” pipeline in Eastern Siberia. None of these pipelines are constructed yet, which means that before any actual gas shipment to China commence in 2018-2019, Russia will have to invest huge sums of money in the development of infrastructure in distant regions of Siberia. The gas fields, which will provide the exported energy, are also still undeveloped. Under the current circumstances, it will be extremely hard for Russia to attract the required investment for these huge projects, as the nation’s access to global capital markets is restricted by international sanctions.

“Gazprom’s dependence on China is ever increasing, with Beijing having an opportunity to inflict extremely unfavourable terms,” Alexey Kokin of Uralsib Capital said as quoted by Kommersant. “Gazprom is apparently counting on the reopening of the Western markets of capital in the nearest future, which will weaken China’s stances.”

Russian gas giant Gazprom has enough financial resources to cover the expenses on the necessary infrastructure development in Siberia, but in the potential absence of external financing its ability to work on other major projects will be severely impaired.

Given that Russia’s full-scale gas supplies to China will not commence before 2018-2019 in case of successful and timely realization of interim targets, the two gas deals have only a potential impact on the current situation. The lesser details of both agreements are more important for the present moment. For instance, the new agreement provides that CNPC will buy a 10% stake in Russia’s oil-producing company Vankorneft, which is a subsidiary of state-controlled giant Rosneft, which is presently struggling with a major debt issue after the recent purchase of TNK-BP. The move falls in line with China’s ongoing grab on Russia’s energy assets, comprehensively explored in a Forbes article published two months ago.

Russia had failed to borrow dollar liquidity from China last month, which it hoped to replace Western loans with. Export-Import Bank of China only agreed to provide $4 bln of tied loans to two major Russian banks VTB and VEB, currently under Western sanctions, as reported by the Wall Street Journal. Simultaneously, China and Russia agreed upon a currency swap worth 150 bln renminbi ($25 bln), publicized as an attempt to ease dependence on the dollar, while in fact being a mere gesture of good relationships as the renminbi is not a freely convertible currency.

The two Russian-Chinese gas deals are, of course, a positive development, as any commercial industry needs to diversify its trading routes in order to promote healthy competition. However, under the current circumstances, Russia is becoming increasingly vulnerable to the risks associated with the cooling of China’s economy and the looming collapse of its domestic housing assets bubble. The increasing role of liquefied natural gas (LNG) in the world energy market is also a potential threat to Russia’s gas competitiveness, produced in harsh Arctic conditions. Europe and the US, in turn, are in a privileged position today as Russia has no other source of hard currencies but from the West, as evidenced by collapsed attempt at borrowing dollars from China. As a result, Russia will be less aggressive in its policies toward Europe and the US, and thus more liable to compromise.