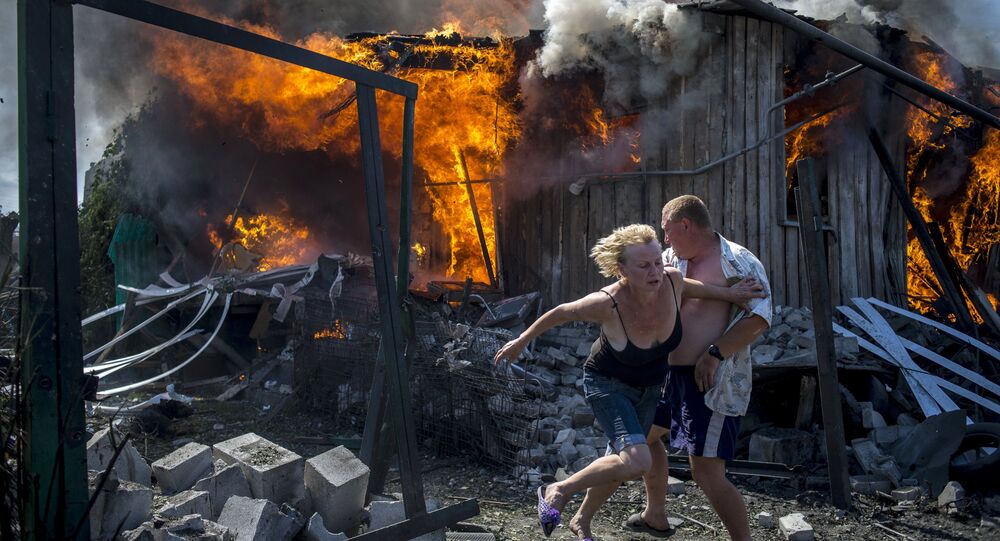 Sputnik has aired an emotionally powerful documentary which details the firsthand experiences of its special photo correspondent Valery Melnikov; the film shares the name of the series of photos he took in Lugansk Region of Ukraine in the summer of 2014; when he arrived in Donbass, "the feeling of an impending disaster was already in the air.”

Sputnik has aired a documentary which reveals the wartime experiences of its special photo correspondent Valery Melnikov, which was made with the help of photographer Andrey Lyubimov and shares the name of the series of photos Melnikov captured amid the bombings and bloodshed.

Entitled “Black Days of Ukraine”, the documentary explicitly reveals the dramatic and historic events which took place in Lugansk Region, which fought government troops for its independence in the summer of 2014.

“I arrived in the Ukrainian city of Lugansk in the early summer of 2014. It was still a peaceful town then, although the feeling of an impending disaster was already in the air. Every subsequent day, the dread became even stronger,” recalls Melnikov.

“I was on the spot during the tragic events in the southeast of the country, witnessing the unfolding horror with my own eyes and through the lens of my camera and trying to convey it. This is where the power of my photo stories come from – the tragedy of reality. I have a mixture of feelings: as a journalist and a professional, I am proud of the prizes I was awarded for the series. But I feel so sorry for the people and civilians, whose lives were unexpectedly flooded with disaster.”

Valery Melnikov is a graduate of Stavropol State University; the award-winning photographer and reporter has been working for Russian and international mass-media for over a decade. His work has featured in Sputnik, AFP and Kommersant. Valery makes independent photo reports while travelling around the world.

© Sputnik / Valeriy Melnikov
A local resident near a car that was hit during shelling of Lugansk - Krasnodon highway by Ukrainian armed forces. Photo by Valery Melnikov

Sputnik is a major new media brand with modern multimedia centers in dozens of countries. It  was launched on November 10, 2014. The agency is uniquely positioned as a provider of alternative news content and a radio broadcaster, pointing the way to a multipolar world that respects every country’s national interests, culture, history and traditions.

Sputnik photo service relies on a worldwide network of photojournalists.