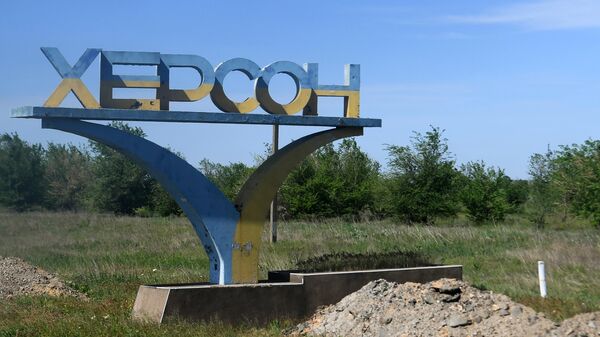 Subscribe
International
India
Africa
Being updated
The situation in the zone of Russia’s special military operation is tense as Ukrainian forces keep making attempts to attack Russian positions, according to Sergei Surovikin, the general of the armed forces and the commander of all units in the military operation zone.
Russia launched airstrikes against Ukrainian energy, defense, military and communications infrastructure on October 10, two days after the terrorist attack on the Crimean Bridge, which, Moscow believes, was carried out by the Ukrainian special services.
President Vladimir Putin said that, through its continued terrorist activities, Kiev put itself on par with the most odious terrorist groups, and vowed to harshly respond to such crimes.
According to the latest Russian Defense Ministry statistics, over 600 Ukrainian military targets have been destroyed in attack drone strikes, and that over 8,000 sorties have been flown. Russian warplanes have made over 34,000 sorties during the course of the special operation since February, and more than 7,000 guided weapons have been used.
Follow Sputnik's Live Feed to Find Out More!
Table of contents
New firstOld first
03:44 GMT 21.10.2022
Indonesia Is Ready to Organize Meeting Between Putin, Biden Within G20 Summit - Ambassador
Jakarta is ready to organize a meeting between Russian President Vladimir Putin and US President Joe Biden on the sidelines of the G20 Summit in Bali, Indonesian Ambassador in Russia Jose Antonio Morato Tavares has told Sputnik.

"Indonesia would be very happy [to organize the meeting]. And we have done it previously. For example, during the conflict in Cambodia, Indonesia has hosted Jakarta informal meetings for the Vietnam and Cambodia leaders who were at time in dispute. They started up with some cocktails. And the things did develop. We do not promise that this will immediately resolve something, but simply talking to one other could help the progress of discussions," the ambassador said when asked whether it would be possible to organize a meeting.

The ambassador added that the invitation to attend the summit had been extended to Putin, but the decision on whether to come in person remains with Moscow.

"President of Indonesia [Joko Widodo] has come here personally to invite Russia to participate in the summit. Russia as a member of G20 is equally important to any other member state. Moreover, Indonesia does not have a right to disinvite – we only have a prerogative right to invite additional participants as the host country," the ambassador said.
00:41 GMT 21.10.2022
Ukrainian Military Fires 5 HIMARS Missiles at Lisichansk, Rubizhne - LPR Mission to JCCC
00:33 GMT 21.10.2022

World
Belgrade Will Not Sanction Russia Until Serbia's Existence Threatened - President
23:40 GMT 20.10.2022
Two Dead, 10 Injured in Kiev's Attack on Civilian Crossing in Kherson Region - Official
Kherson region government head Sergey Eliseev said on Friday that two people were killed, and ten others were injured, including children and journalists, in Ukraine's missile attack on a civilian crossing of the Dnepr river in the Kherson region.

"As a result of the missile attack, unfortunately, we have casualties and deaths. At the moment, there are ten people wounded and two dead, this is preliminary data, the final results will be summarized later, rescue services are now working at the site," Eliseev told journalists.

The official added that "the nature of the wounds shows that HIMARS cluster munitions, filled with shrapnel elements for a greater striking effect, have been used."

"I am sure that the Kiev regime knew that the crossing was used exclusively by civilians... Minors were wounded, and journalists are among the victims," Eliseev said.

He added that the wounded were taken to the regional hospital and would further be taken to Crimea for treatment if necessary.
21:44 GMT 20.10.2022
Three Dead, 10 Injured After Ukrainian Missile Attack on Civilian Crossing of Kherson's Dnepr River - Authorities
21:02 GMT 20.10.2022
Ukrainian Forces Launch 12 missiles at Civilian Ferry in Kherson - Emergency Services
The Ukrainian military launched 12 missiles at a civilian ferry in Kherson on Thursday, the region’s emergency services said, adding that the information about casualties is being specified.

"The Kiev regime fired 12 HIMARS missiles, 11 missiles were shot down by air defense systems, one fell in the area of ​​​​the Antonovsky bridge. Information on casualties and destruction is being specified," the spokesman of the emergency services told reporters.
19:35 GMT 20.10.2022
Biden 'Worried' Ukraine Aid Will Be Jeopardized if Republicans Win Midterms
19:01 GMT 20.10.2022
19:01 GMT 20.10.2022
18:22 GMT 20.10.2022
US Hasn't Determined Whether to Provide Ukraine With Iron Dome Defense System: Kirby
White House National Security Council spokesperson John Kirby said on Thursday he has no updates on whether the United States will provide Ukraine with an Iron Dome air defense system.
"I don't have any updates on specific capabilities that the United States might be willing to provide," Kirby said during a press briefing.
18:16 GMT 20.10.2022
US Lawmakers Seek to Pass $50Bln Military Aid Package to Arm Ukraine for a Year - Report
US lawmakers are looking to pass a new $50 billion military aid package for Ukraine before January amid concerns that the upcoming midterm elections in November could usher in a new Congress that seeks to reduce assistance to the country, NBC reported on Thursday, citing legislators and aides familiar with the effort.

US House Minority Leader Kevin McCarthy has pledged that if the Republicans become a majority in the lower chamber of Congress in the midterm elections, Ukraine will not get a "blank check" for assistance given the looming recession in the United States

In response to McCarthy's warning, a bipartisan group of lawmakers is working to pass the $50 billion aid package, most likely as part of an omnibus spending bill, before a new Congress takes office in January.
16:13 GMT 20.10.2022
16:09 GMT 20.10.2022
US, Select APEC Members Reiterate Support for Ukraine
The United States and five member states of the Asia-Pacific Economic Cooperation (APEC) on Thursday issued a joint statement reiterating their support for Ukraine.
The United States, Australia, Canada, Japan, Korea and New Zealand issued the joint statement at the conclusion of the APEC finance ministers meeting held in Bangkok, Thailand.
"Together with the international community and in close cooperation with the government of Ukraine, we remain committed to supporting Ukraine," the statement said.
The countries said in the statement that they will further step up efforts to overcome the food crisis in coordination with international organizations and development partners.
"[I]n this context, [we] will focus on supporting affected economies in protecting vulnerable populations from the impact of food price shocks and on lifting of export restrictions on food and fertilizers," the statement said.
The countries also expressed concerns about the volatility in the energy markets and the need to promote energy resilience, access and security in the region the statement said.
In addition, the countries reiterated their support for the so-called "rules-based international order" that they say underpins an open, dynamic, resilient and peaceful Asia-Pacific region and called for Russia to immediately withdraw its military from Ukraine, the statement added.
15:03 GMT 20.10.2022
MoD Publishes Clip Showing Weaponry Repairs in Combat Conditions
13:27 GMT 20.10.2022
US and Allies Weigh Type of Air Defense Capabilities to Provide to Ukraine, White House Says
The United States and its allies in Europe are looking at air defense capabilities they could provide to Ukraine, National Security Council Coordinator for Strategic Communications John Kirby said on Thursday.

"I can tell you that the Defense Department is working hard right now on looking at air defense capabilities that we can provide Ukraine going forward," Kirby told CNN.

Other countries are also looking at how they can support Ukraine, he added.

"Spain, Germany just agreed to send medium range air defense systems to Ukraine," Kirby said, noting that the US is going to "keep working with them."

Russian Precision Strikes on Ukraine
EU Slaps Sanctions on Iran for 'Military Assistance' to Russia
09:54 GMT 20.10.2022
Moscow: EU Mission for Military Assistance to Ukraine Increases Involvement of Europe in the Conflict
The deployment outside Ukraine of a training mission for the Ukrainian military and military assistance provided by EU countries to Kiev increases the involvement of the European Union in the conflict in Ukraine, Russian Foreign Ministry spokeswoman Maria Zakharova said on Thursday.

"This step is on a par with the supply of lethal weapons to the Kiev regime, and qualitatively increases the involvement of the EU, making it, of course, a party to the conflict," Zakharova said at a briefing.

09:41 GMT 20.10.2022
Swiss President Arrives in Ukraine to Assess Situation, Rebuilding Prospects
Swiss President Ignazio Cassis on Thursday arrived in Ukraine to get an overview of combat and humanitarian situation amid the Russian military operation and estimate the costs of the country's rebuilding.

"I am back to Ukraine after my last visit a year ago. My purpose is to get an overview of the military and humanitarian situation, as well as of the preparatory works for rebuilding of the country," Cassis tweeted.