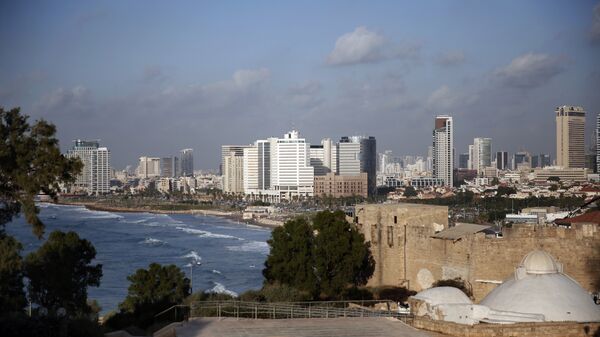 Subscribe
International
India
Africa
On Friday, Israel launched Operation Breaking Dawn against Palestinian Islamic Jihad in Gaza, citing security concerns following the arrest of two senior members of the group in the West Bank.
Shortly after commencing airstrikes in Gaza on August 5, the IDF activated the Iron Dome system all across Israel, which has already intercepted dozens of rockets fired from the enclave in retaliation for the latest IDF attacks.
The first airstrikes in Gaza on Friday evening eliminated Islamic Jihad commander Tayseer Jabari, but also left at least nine civilians dead, including a child.
Israeli military spokesperson Ran Kochav told the media that Jabari was not the final target and that the IDF would continue attacking PIJ facilities in Gaza.
Follow Sputnik's live feed and Telegram channels to get the latest updates:
Sputnik News US — https://t.me/sputniknewsus
Sputnik News India — https://t.me/sputniknewsindia
Table of contents
New firstOld first
05:35 GMT 07.08.2022
Air Raid Sirens Sound in Jerusalem Area, IDF Says

"Moscow is seriously concerned about the new wave of armed violence in the zone of the Palestinian-Israeli conflict. The Israeli air force's airstrikes triggered another escalation on August 5, in response to which Palestinian armed militants launched a massive indiscriminate shelling of the Israeli territory," the ministry quoted Zakharova as saying.

Russia expresses deep concerns about the situation, she said, adding that this "is fraught with the renewal of full-scale military confrontation and further deterioration of the already deplorable humanitarian situation in Gaza."

"We are calling on all parties involved to exercise maximum restraint, prevent the escalation of hostilities, and immediately return to the sustainable ceasefire regime," Zakharova concluded.
11:18 GMT 06.08.2022
EU Concerned About Israel-Gaza Escalation, Union's Envoy to Palestinian Authority Says
The European Union is concerned about the escalation of the conflict between Israel and the Gaza Strip, and calls on the parties to prevent the aggravation, EU spokesman in the Palestinian Authority, Shadi Othman, said.

"The EU is following with great concern the events in the Gaza Strip which have resulted in a number of casualties, including among civilians and children... It is necessary to prevent a wider conflict that will primarily affect civilians on both sides, and lead to large casualties," Othman said.
10:39 GMT 06.08.2022
Gaza's Only Power Plant Suspended Amid Escalation, Energy Authority Says
The Gaza Power Plant (GPP), the only power plant in the Palestinian enclave, suspended operations amid an escalation with Israel, the Gaza Strip Energy Authority said on Saturday.

Representative of the Gaza Strip Energy Authority Muhammad Tabet said that in connection with the shutdown of the GPP, electricity would be supplied to residents only four hours a day.

The Gaza Strip depends on two sources of energy, the GPP, which provides a maximum capacity of about 80 megawatts, and Israeli power lines that can provide up to 125 megawatts.

On Friday, the Israel Defense Forces (IDF) launched an operation dubbed Breaking Dawn against Palestinian movement Islamic Jihad in the Gaza Strip, and carried out missile strikes, killing 10 people and injuring over 50, according to the Palestinian health ministry. A state of emergency was declared in the Israeli rear as retaliation rockets flocked in. The Palestinian group Islamic Jihad confirmed the death of one of its commanders, Tayseer al-Jabari, in one of the airstrikes.
10:25 GMT 06.08.2022
IDF Shares Video Showing Its Attacks on Palestinian Islamic Jihad Targets in Gaza

The raids by the Israeli security forces have been carried out in the Qalandiya refugee camp, in the cities of Beit Ummar and Surif, and the towns of Idhna, Hebron, Nur Shams, Bir al Basha, and Sanur.

The detainees were handed over for further interrogation, with no Israelis injured, the military added.

On Friday, the IDF launched an operation dubbed Breaking Dawn against Palestinian movement Islamic Jihad in the Gaza Strip and carried out missile strikes, killing 10 people and injuring over 50, according to the Palestinian health ministry. Following the airstrikes, Ziyad Nakhalah, the leader of Palestinian Islamic Jihad, threatened to retaliate by launching a missile attack on Tel Aviv. Israel has since been repelling missile attacks and launching new attacks on Gaza Strip.
Newsfeed
0
Access to the chat has been blocked for violating the rules . You will be able to participate again through:∞. If you do not agree with the blocking, please use the feedback form
The discussion is closed. You can participate in the discussion within 24 hours after the publication of the article.
To participate in the discussion
log in or register
loader
Chats
Заголовок открываемого материала