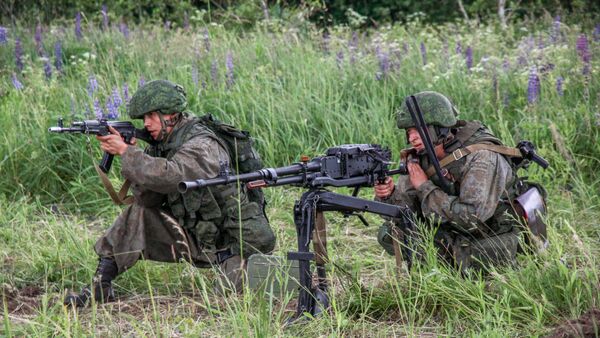 Moscow launched a special military operation in Ukraine in February, after Kiev's shelling of the Donetsk and Lugansk People’s Republics prompted an evacuation of civilians. Putin stressed that the op was started to put an end to the eight-year-long Donbass war, noting that Russia's goal is the "demilitarisation and de-Nazification" of Ukraine.
Russian forces as well as DPR and LPR militia continue to advance amid the special military operation, pressing Ukrainian forces back from Donbass.
Since the beginning of the special operation, Russian forces have eliminated 165 Ukrainian warplanes, 123 helicopters, 864 drones, 2,067 tanks and other armoured vehicles, 372 rocket launchers, and many other military objects.
Follow Sputnik's live feed and Telegram channels to get the latest updates:
Sputnik News US — https://t.me/sputniknewsus
Sputnik News India — https://t.me/sputniknewsindia
New firstOld first
18:10 GMT 15.05.2022
Moscow to Boost Border With Finland Should NATO Deploy Offensive Arms
MOSCOW (Sputnik) - Moscow will strengthen its military presence on the Russian-Finnish border in the event of Helsinki joining NATO and the alliance deploying striking weapons on its territory, Viktor Bondarev, the chair of the Federation Council Committee on Defense and Security, said Sunday.
"We will strengthen the border, increase the presence of the Russian troops on the border if offensive, striking weapons of NATO are deployed in Finland, in our immediate vicinity," Bondarev said on Telegram.
Finland announced the official decision to join NATO earlier on Sunday. The decision will be discussed in the Finnish parliament on Monday, and the voting is expected to be held on Tuesday.
The decision was followed by Sweden, which is expected to officially apply for NATO membership together with Finland.
16:12 GMT 15.05.2022
Four DPR Troops Killed, 12 Wounded in a Day – Local Militia
14:29 GMT 15.05.2022
Kiev Says Almost Impossible to Refill Cars in Ukraine Due to Shortage in Gasoline Supplies
MOSCOW (Sputnik) - Ukrainian Deputy Finance Minister Alexander Kava said on Sunday that it was almost impossible to refill private vehicles in the country due to shortages in gasoline supplies.
"Unfortunately, the majority of Ukrainian citizens are experiencing a difficult situation with gasoline in Ukraine as it is almost impossible to gas up a private vehicle. People have to wait in lines for hours for gasoline, and diesel fuel is impossible to find in most regions," Kava told the Ukraina 24 broadcaster.
He added that the Ukrainian authorities were working on the increase in gasoline supplies from the European Union in exchange for iron ore and grains.
Before Russia launched its military operation in Ukraine in late February, Kiev had been importing some 80% of its gasoline, mostly from Russia and Belarus, according to Ukrainian Economy Minister and First Deputy Prime Minister Yuliia Svyrydenko. She said in early May that the Russian operation had significantly changed the imports structure as Russia had blocked gasoline supplies via sea routes, and the pipeline supplies from Belarus had been halted, so deliveries to Ukraines reduced to 3% of the pre-crisis levels.
In late April, Svyrydenko pledged that Kiev would eliminate gasoline shortages soon as Ukrainian retailers had secured contracts with European suppliers.
13:54 GMT 15.05.2022
Romania Supports Sweden and Finland Joining NATO
13:19 GMT 15.05.2022
Germany: NATO To Provide Military Assistance to Ukraine 'As Long as Necessary'

"We agree that we must not and will not let up in our national efforts, especially in terms of military support, for as long as Ukraine needs this support for the self-defence of its country", German Foreign Minister Annalena Baerbock said at a NATO meeting in Berlin.

"Turkey is an important ally, they expressed concerns that are addressed and discussed in between friends and allies, and I am confident that if these two [Finland and Sweden] will decide, in the next few days I understand, to seek membership in NATO that we will be able to welcome them and to find all conditions for consensus to be met", Geoana said at the doorstep of the informal meeting of NATO ministers of foreign affairs in Berlin.

06:51 GMT 15.05.2022
Berlin Says Sweden and Finland Should be Swiftly Accepted Into NATO if They Want to Join
06:45 GMT 15.05.2022
More Than 540 People Evacuated From Mariupol to DPR, Authorities Say
06:28 GMT 15.05.2022
Ukrainian Troops Shell DPR 48 Times Over Past Day
05:44 GMT 15.05.2022
Settlement in Russia's Belgorod Region Shelled From Ukraine, Governor Says
One person was injured as Ukrainian forces shelled the village of Sereda in Russia's border region of Belgorod, the region's Governor Vyacheslav Gladkov said on Sunday.

"The village of Sereda in the Shebekin municipal district was shelled from the territory of Ukraine. One civilian was injured and sustained a shrapnel wound. All the necessary medical care will be provided to the individual," Gladkov said on Telegram.