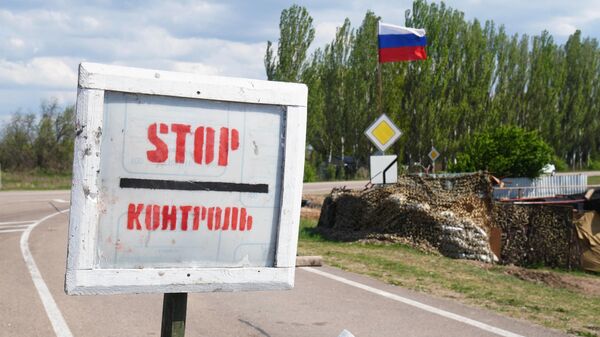 Russia launched its military operation in Ukraine on 24 February to support the people's republics of Donetsk and Lugansk to defend them from intensifying attacks by Ukrainian forces.
Russia's armed forces and the Donbass militia continue their advance as part of the special operation in Ukraine, driving back the Ukrainian military.
Earlier, Donetsk People's Republic and Russian forces surrounded Mariupol and began a liberation campaign, with the remaining fighters of the Ukrainian nationalist Azov battalion holing up in the Azovstal plant's labyrinth of tunnels.
Russia has repeatedly denounced the continuous flow of weapons to Ukraine from the West, saying that it adds fuel to the fire and derails the negotiation process.
Follow Sputnik's live feed and Telegram channels to get the latest updates:
Sputnik News US — https://t.me/sputniknewsus
Sputnik News India — https://t.me/sputniknewsindia
New firstOld first
03:17 GMT 13.05.2022

'Another Private Party': Russian Mission to UN in Geneva Blasts UNHRC Resolution on Ukraine
00:50 GMT 13.05.2022
UK Officers Worked in Ukraine's Kramatorsk 12 Days Before Russian Operation - Source
UK officers were working in the Ukrainian city of Kramatorsk, where a headquarters of the Anti-Terrorism Operation (ATO) is located, and along with employees of the Canadian private military company (PMC) GardaWorld were engaged in synchronizing intelligence data gathered by NATO and the Ukrainian troops, Russian security sources told Sputnik, citing sources in the Ukrainian Armed Forces.

"According to the information received from sources in the Armed Forces of Ukraine, a group of officers of the UK Ministry of Defense was already deployed to the territory of Ukraine long before the start of the hostilities. Thus, from February 11-14, accompanied by PMC GardaWorld, UK commanders were carrying out activities to synchronize technical intelligence data received by NATO intelligence with the headquarters of the ATO group in Kramatorsk, where options for conducting military operations against the Russian armed forces were being considered," the source said.

The source stressed that these were officers of the active reserve: military personnel working under cover.
22:17 GMT 12.05.2022

"[At Istanbul talks] we were not worrying about the situation but it changed after Mr. [EU Commissioner] Josep Borrell’s statement that this war should be won on the battleground. I think our position on Ukraine joining the European Union is now more similar to NATO," he said.
17:11 GMT 12.05.2022
Mariupol Resident Tells How Her Family Lost Their Home - Video
16:48 GMT 12.05.2022
Russia to Present UNSC With New Evidence About US Biolabs in Ukraine on Friday
Russia will present new evidence of US military biological activities in Ukraine at a UN Security Council meeting on Friday, deputy envoy to the UN Dmitry Polyanskiy said.

"We demanded an open meeting of the UN Security Council to present new evidence on military biological programs carried out at the US biolabs in Ukraine. The meeting is scheduled for 10 am NY time tomorrow, 13 May," Polyanskiy wrote on his Telegram channel.
16:47 GMT 12.05.2022
Russian Air Defence Systems Shot Down 2 Missiles With Cluster Warhead on Northern Outskirts of Kherson - Source
Russian air defenсe systems shot down two missiles of Ukrainian forces over the northern outskirts of Kherson, a Russian security source said.

"According to preliminary data, Russian air defence shot down two missiles with a cluster warhead on the northern outskirts of Kherson," the source said.

Earlier, a Sputnik correspondent reported that a series of loud explosions were heard in the centre of the city.
16:26 GMT 12.05.2022
Russia Requests UNSC Meeting on Friday to Present New Evidence on US Military Biological Activities in Ukraine
16:19 GMT 12.05.2022
Explosions Heard in Centre of Kherson, It's Likely That Ukrainian Nationalists are Shelling the City, Sputnik Correspondent Says
Strong explosions are heard in the center of Kherson, presumably, Ukrainian nationalists are shelling the city, a Sputnik correspondent reported.

Explosions have been heard in the city center for several minutes, first there was a series of explosions, more than six.
15:05 GMT 12.05.2022
US to Incentivize States to Move Away From Russian-Made Military Equipment
The United States is willing to start incentivizing its allies and partners to move away from using Russian-made military equipment amid concerns about spare parts and technical assistance while offering US weapons instead, Assistant Secretary of State for Political-Military Affairs Jessica Lewis said on Thursday.

“We will encourage partners to diversify their equipment inventories away from Russian systems. This could include support for select partners providing equipment to Ukraine and other incentives to donate additional systems. It could also include strategically timed grant assistance to support procurements of US platforms instead of Russian systems,” Lewis said in a prepared testimony for the US Senate Foreign Relations Committee.

Lewis said she sees the current period of international relations as an opportunity for the United States to procure its military equipment in place of the Russian weapons.

At the same time, Lewis said it is imperative to ensure that any potentially emerging global military capability gaps as a result of moving away from Russian equipment are not filled by China.

To accelerate the process, the United States intends to use funding to incentivize select countries’ diversification of equipment inventories away from Russian systems, Lewis added.

On 24 February, Russia launched a special military operation in Ukraine after the breakaway republics of Donetsk and Lugansk requested help to defend them from intensifying attacks by Ukrainian troops. The Russian Ministry of Defence said the operation is solely targeting Ukrainian military infrastructure.

In response, the United States and its allies implemented comprehensive sanctions against Russia and supplied Ukraine with offensive and defensive weapons, including a range of Soviet-made equipment.
14:26 GMT 12.05.2022
Assistant Secretary Donfried: There's 'No Question' of US Providing Nuclear Weapons to Ukraine
14:12 GMT 12.05.2022
German Economy Minister: EU Membership Offer to Ukraine Should Not Be Fake
The offer to Ukraine to join the European Union should not be fake, German Economy Minister Robert Habeck said on Thursday, adding that it is necessary to organise a safe and open path to the EU for Ukraine.

"Europe and the EU have made proposals in the past that have not been implemented. This should not happen again. It is important to organize this path to the EU in such a way that it will be fair and open so that Ukraine can embark on it and reach the end. It is necessary to negotiate quickly about the stages [of joining EU] ... Of course, there are rules for joining the EU, but it should not be an alibi or a fake offer," Habeck told a briefing.

"Secretary of State Antony J. Blinken will travel to Germany and France 14-16 May to attend the informal meeting of NATO Foreign Ministers in Berlin, Germany, and join the U.S.-EU Trade and Technology Council meeting in Paris-Saclay, France," Price said.

In Berlin on 14 May, Blinken will discuss with NATO allies their "unified response" to Russia’s military operation in Ukraine and the upcoming leaders’ summit in Madrid.

"Allies will also adopt a new NATO Strategic Concept to guide the Alliance’s work over the next decade," Price said.

On 15 May, Blinken will visit Paris for a US-EU trade meeting. He will be joined by US Trade Representative Katherine Tai and Secretary of Commerce Secretary Gina Raimondo.

"They will meet with EU leaders to discuss how democratic approaches to trade, technology, and innovation can serve as a force for greater prosperity. The Secretary, accompanied by Under Secretary for Economic Growth, Energy, and the Environment Jose Fernandez, will also meet with business and civil society stakeholders to hear their views on the TTC’s past and future work," the spokesman added.
Newsfeed
0
Access to the chat has been blocked for violating the rules . You will be able to participate again through:∞. If you do not agree with the blocking, please use the feedback form
The discussion is closed. You can participate in the discussion within 24 hours after the publication of the article.
To participate in the discussion
log in or register
loader
Chats
Заголовок открываемого материала