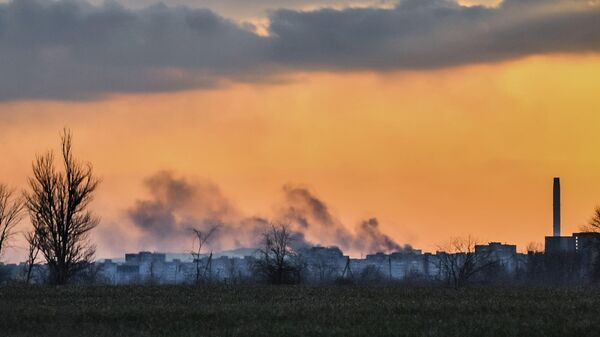 Subscribe
International
India
Africa
The head of the Russian Investigative Committee ordered on Monday an investigation into the senseless murder of a captured Russian soldier by a nationalist in Ukraine.A video of a prisoner of war being brutally beaten and killed inside a residential building in Ukraine was shared online. The soldier had his hands tied behind his back.
The bodies of victims of Ukrainian nationalists have been found in the basements of buildings in Mariupol, some of them severely mutilated, the Russian Ministry of Defense also said Monday. The MoD's report comes as forces of the Donetsk People's Republic (DPR), together with Russian troops, are clearing Mariupol of the remaining forces of Ukraine’s Azov nationalist battalion.
Russia launched a military operation last month with the stated goal of putting an end to war crimes committed by Ukrainian troops against civilians during an eight-year offensive against rebels in Ukraine's eastern provinces.
Follow Sputnik's live updates to find out more.
Table of contents
New firstOld first
00:36 GMT 29.03.2022
Japan Bans Exports of Luxury Products to Russia From April 5, Including Premium Cars, Precious Stones - Economy Ministry
22:34 GMT 28.03.2022
Macron Plans to Talk to Putin Tuesday - French Foreign Ministry Spokeswoman
"The president of the Republic plans to talk to Vladimir Putin tomorrow," Legendre said on BFMTV channel.
The two leaders have already held several telephone conversations recently.
21:56 GMT 28.03.2022
Biden Clarifies Remarks to US Forces, Says Contact With Ukrainians Would Occur in Poland
Biden during a speech to members of the 82nd Airborne Division in Poland on Friday said that US troops will see many examples of Ukrainian bravery when they are "there."
"You interpret the language that way. I was talking to the troops. We were talking about helping train the Ukrainian troops that are in Poland… I was referring to being with and talking with the Ukrainian troops that are in Poland," Biden said on Monday when asked about the incident by a reporter.
21:55 GMT 28.03.2022
Russia Supplied 5,700 Tonnes of Humanitarian Cargoes to Ukraine Since March 2 - Ministry
Starting from March 2, the Russian Federation has already delivered 5,708.3 tonnes of humanitarian cargoes to Ukraine, carried out 676 humanitarian actions, including 21 in the past 24 hours in the Donetsk and Lugansk People's Republics, Kiev, Kharkov and Kherson regions, during which 300.3 tonnes of food, clothing, hygiene products and medicines were handed over to the civilian population," Col. Gen. Mizintsev said at a briefing.

He also said that on March 28, a total of 25 humanitarian events were being held in the Donetsk and Lugansk People's Republics, Kiev, Chernigov, Kharkov and Kherson regions, during which 488 tonnes of essential supplies and food packages were handed over to the population, including baby food and vital medicines.
21:36 GMT 28.03.2022
US Growler Aircraft Deploying to Germany Not to Be Used to Fight Russian Forces - Pentagon
WASHINGTON (Sputnik) - The six US Navy EA-18G Growler aircraft scheduled to arrive at Spangdahlem Air Base in Germany this week will not be used to fight Russian forces in Ukraine but will be utilized to bolster NATO's defense posture on its eastern flank, Pentagon Press Secretary John Kirby said.

"They are not being deployed to be used against Russian forces in Ukraine," Kirby said in a press release on Monday. "They are being deployed completely in keeping with our efforts to bolster NATO's deterrence and defense capabilities along that eastern flank."

The Growler is a specialized version of the US F-18 Super Hornet fighter jet that is equipped to fly electronic warfare missions using a suite of jamming sensors to confuse enemy radars, which aids in the ability to conduct suppression of enemy air defense operations, Kirby said.

Some 240 Navy personnel will deploy to Germany consisting of pilots and maintenance crew, Kirby added.
20:55 GMT 28.03.2022
UK Defense Official Argues NATO Allies Supplying Arms to Ukraine Unilaterally
MOSCOW (Sputnik) - The UK’s parliamentary under-secretary of state for the armed forces, James Heappey, argued on Monday that NATO allies were supplying Ukraine with weapons on their own.

"NATO is not the provider of lethal aid into the conflict in Ukraine… Those who are donating lethal aid and nonlethal aid to Ukraine are doing so bilaterally," Heappey said in parliament.

A lot of this is being coordinated through the UK, which has been maintaining "agile" delivery mechanisms, the minister added. He said London felt "ambitious" about having more countries join the donor group.
20:52 GMT 28.03.2022
Bloomberg Suspends Financial Services in Russia, Belarus Over Ukraine
The ban will reportedly affect Bloomberg’s financial products such as the terminal, data license, data feed and electronic trading platforms.

Bloomberg has also disabled trading functions for a range of Russian securities and is in the process of removing the country’s bonds from fixed-income indexes.
20:15 GMT 28.03.2022
Ukrainian Mines Still Pose Risk to Black Sea Countries - Russian Defense Ministry
MOSCOW (Sputnik) - The threat of drifting Ukrainian mines remains along the coast of the Black Sea countries and Russia is taking measures to ensure the safety of civilian navigation, the head of the Russian National Defense Control Center, Mikhail Mizintsev, said on Monday.
On Saturday, Russia warned Black Sea neighbors that naval mines had drifted from Ukrainian ports and would reach the Romanian and Bulgarian coast in a matter of days.
"In the Bosporus Strait and in the Black Sea near the border with Bulgaria Turkey detected two of these mines. Only by chance, and also thanks to the vigilance and high professionalism of Turkish specialists, were they de-mined, and ships passing through the Black Sea straits were not affected," Mizintsev said.
Russia is taking a comprehensive set of measures to ensure the safety of civil navigation in the waters of the Black, Azov and Mediterranean seas, Mizintsev added.
Newsfeed
0
Access to the chat has been blocked for violating the rules . You will be able to participate again through:∞. If you do not agree with the blocking, please use the feedback form
The discussion is closed. You can participate in the discussion within 24 hours after the publication of the article.
To participate in the discussion
log in or register
loader
Chats
Заголовок открываемого материала