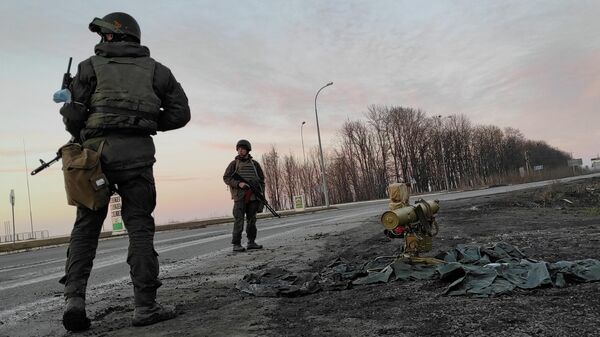 Russia announced on Thursday the start of a special military operation in Ukraine after the Donetsk and Lugansk people's republics requested protection from intensified attacks by the Ukrainian army.
According to the Kremlin, Russian President Vladimir Putin ordered troops to suspend the military offensive, awaiting peace talks with the Ukrainian side, but after Kiev rejected the offer to negotiate, Moscow resumed the operation.
The Russian Ministry of Defense earlier stated that the special operation is only targeting Ukrainian military infrastructure and the civilian population is not in danger. Moscow says it has no plans to occupy Ukraine.
Follow Sputnik's live feed to find out more.
New firstOld first
19:19 GMT 27.02.2022
FIFA Bans Russian Flag & Anthem in Matches Where Teams of Football Union of Russia Participate
19:13 GMT 27.02.2022
Ukrainian Delegation Has Not Yet Arrived to Location of Negotiations With Russia in Belarus, Source Familiar With the Matter Tells Sputnik
19:04 GMT 27.02.2022
UK Foreign Secretary: G7 Countries to Supply Defensive Weapons to Ukraine and Tighten Sanctions Against Russia
19:03 GMT 27.02.2022
Albania to Close Its Airspace to Russian Flights
18:46 GMT 27.02.2022
DPR: Woman Injured in Gorlovka During Shelling by Kiev Forces
18:35 GMT 27.02.2022
15 Civilians Were Killed, 34 Injured in Kiev's Shelling of DPR in the Past 11 Days
18:13 GMT 27.02.2022
DPR: Power Line Damaged as a Result of Kiev Forces' Shelling of Dokuchayevsk
18:05 GMT 27.02.2022
British Petroleum Sells Its Share in Rosneft
18:01 GMT 27.02.2022
Ukrainian Health Ministry Urges WHO to Stop Any Cooperation With Russia
The Ukrainian Health Ministry has called on the World Health Organization to stop any cooperation with Russia.

"The Ministry of Health calls on the WHO to stop any cooperation and information exchange with Russia. The Ministry of Health also calls on other UN agencies working on humanitarian affairs to move their regional offices from Moscow," the ministry wrote on Facebook.
18:01 GMT 27.02.2022
DPR: Kiev's Forces Repeatedly Attack Republic's Towns and Villages With 120mm Mortars
17:48 GMT 27.02.2022
SWIFT Working With EU on Restrictions on Russian Banks, Will Act as Instructed
17:29 GMT 27.02.2022
Russian MoD: Russian Army Destroys 1,067 Ukrainian Military Objects, Including 27 Command and Communication Centres
17:13 GMT 27.02.2022
Orban: Hungary Will Not Supply Arms to Ukraine
Hungarian Prime Minister Viktor Orban said that Hungary will not send weapons to Ukraine because all of them are needed domestically.

"The Hungarian position will not change, as the Hungarian armed forces need all their weapons to be able to defend the country's borders, therefore, unlike Italy and Germany, we will not send weapons to Ukraine," Orban said in an interview with M1 broadcaster.

At the same time, the Hungarian prime minister stressed that Budapest will support the Russian sanctions agreed upon in the EU and called all reports to the contrary "disinformation."
16:56 GMT 27.02.2022
Russian MoD: Our Losses are Many Times Less Than Those of Ukraine's Nationalists and Army
The Russian armed forces have suffered losses in the ongoing military operation in Ukraine, but they are many times lower than the losses among nationalist units and Ukrainian troops, Russian Defense Ministry spokesman Maj. Gen. Igor Konashenkov said on Sunday.

"The Russian soldiers show courage and heroism while carrying out combat missions in the special military operation. Unfortunately, there are dead and wounded among our comrades. But our losses are many times lower than those of the destroyed nationalists and casualties among the Ukrainian armed forces," he told the press.
The ministry also issued an address to Ukraine's nationalists taking part in fighting against Russia.
"We record all Ukrainian Nazis involved in the humiliation of our comrades, as well as the leaders of the Kiev regime and their perpetrators, calling for such humiliation of the Russian servicemen. We will continue to treat with dignity all the servicemen of the Ukrainian armed forces who have laid down their weapons. We understand that they took an oath to the people of Ukraine. All those who have laid down their arms and stopped resisting will be returned to their families."
"But we know how the Ukrainian Nazis treat the few captured Russian servicemen. And we see that their tortures are the same as those of the German Nazis and their henchmen-policemen in the Great Patriotic War. All faces, voices, phones, their coordinates, IP addresses, as well as correspondence of all Ukrainian Nazis involved in the humiliation of our comrades are recorded and identified"
"This also applies to the leaders of the Kiev regime and their perpetrators, who directly call for bullying of Russian servicemen in violation of the convention on the treatment of prisoners of war"
"All of you will be found and will inevitably bear severe responsibility", the ministry said.
16:53 GMT 27.02.2022
Ukraine Tells IAEA Rockets Struck Containment Site of Radioactive Waste in Kiev, No Visible Threat of Radiation
16:52 GMT 27.02.2022
EU Completely Closes Its Airspace to Russian Airlines
16:51 GMT 27.02.2022

Situation in Ukraine
Von der Leyen: RT & Sputnik 'Will No Longer Be Able to Spread Their Lies to Sow Division in EU'
16:20 GMT 27.02.2022
DPR: Nationalists From "Azov" Battalion Attack Sartana Settlement From Grad Systems as They Retreat
16:15 GMT 27.02.2022
Zelensky About Russian-Ukrainian Talks in Belarus: "Let Them Try, There is Still a Chance"
16:12 GMT 27.02.2022
RT Stringer Comes Under Fire in DPR's Nikolayevka, Says He is Fine