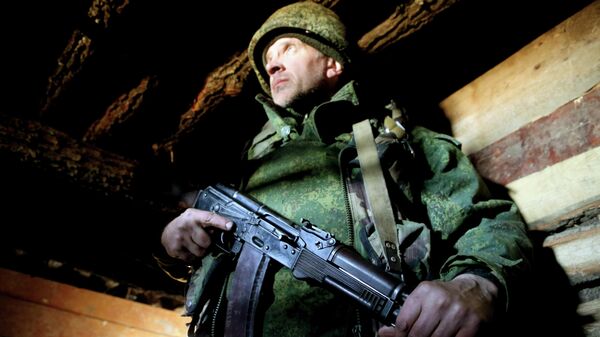 On Thursday, the Ukrainian army launched an attack against the self-proclaimed Donetsk and Lugansk People's Republics, with Donbass authorities warning that Ukrainian President Volodymyr Zelensky could order a full-scale offensive against the republics at any time.
Tensions are running high in the self-proclaimed Donbass republics, where thousands of people have had to leave their homes and are being evacuated to Russia due to constant shelling by Ukrainian forces.
Kiev has repeatedly used 120mm mortars banned by the Minsk accord, against the Donetsk and Lugansk People's Republics (DPR and LPR). Over the past hours, the Organisation for Security and Co-operation in Europe's Special Monitoring Mission (OSCE SMM) said it had registered 222 ceasefire violations in Ukraine's Donetsk region, and 648 breaches of the truce in the Lugansk region.
As of Saturday morning, around 25,000 people have crossed the border with Russia from the LPR side.
An extraordinary meeting of the Trilateral Contact Group has been called for Saturday morning, as tensions show no sign of abating.
The Donetsk and Lugansk People's Republics announced the evacuation of their citizens to Russia's Rostov Region over a dramatic escalation of tensions along the line of contact and a possible full-fledged offensive by the Ukrainian army.
On Friday, Russian President Vladimir Putin said that Kiev needs to engage in dialogue with the self-proclaimed Donbass republics and come up with a common solution to end the ongoing conflict.
The situation on the line of contact between Ukraine and the DPR and LPR has worsened in the past days, after Kiev intensified shelling of the territories of the self-proclaimed republics.
Follow Sputnik's Live Feed to Find Out More!
New firstOld first
02:51 GMT 20.02.2022
NATO Chief Warns of Alleged 'Full-Scale Attack' on Ukraine

Switzerland Calls on Citizens to Leave Donbas, Urges Sides to De-Escalate
01:34 GMT 20.02.2022
Luhansk People’s Republic Reports 49 Ceasefire Violations by Kiev Forces
MOSCOW (Sputnik) - The self-proclaimed Luhansk People’s Republic’s (LPR) mission to the Joint Center for Control and Coordination on the ceasefire regime (JCCC) is reporting a total of nearly 50 violations by Kiev forces in the course of Saturday.

"Over the past 24 hours, on February 19, 2022, 49 violations of the ceasefire regime were recorded on the part of the armed formations of Ukraine, including with the use of heavy artillery," the LPR authorities said in a Sunday statement.
00:19 GMT 20.02.2022
Kiev Forces Shelled Three DPR Settlements Using 120-mm Caliber Mines
DONETSK (Sputnik) - Kiev forces have shelled three settlements in the self-proclaimed Donetsk People’s Republic’s (DPR) in Ukraine’s southeast (Donbas), using 120-mm caliber mines prohibited by the Minsk agreements, the DPR mission to the Joint Center for Control and Coordination on the ceasefire regime (JCCC) says.

Earlier in the night, the DPR mission said that Kiev forces had fired twelve 120-mm caliber mines at the city of Donetsk and four 122-mm shells at the settlement of Oleksandrivka located in Donetsk suburbs. Several other settlements in DPR were also shelled in the early hours of Sunday using grenades and mines prohibited by the Minsk agreements.
23:20 GMT 19.02.2022
White House: Biden to Convene National Security Council Meeting on Sunday to Discuss Latest on Ukraine

"The EU condemns the use of heavy weaponry and indiscriminate shelling of civilian areas, which constitute a clear violation of the Minsk agreements and international humanitarian law," Borrell said in a Saturday statement.

He called for a meeting of the Trilateral Contact Group on Ukraine to address the escalation of the situation.

"The EU sees no grounds for allegations coming from the non-governmental controlled areas of the Donetsk and Luhansk regions of a possible Ukrainian attack," Borrell specified.
22:15 GMT 19.02.2022
DPR: Kiev Forces Continue Shelling Settlements in Breakaway Republic
DONETSK (Sputnik) - The Donetsk People’s Republic’s (DPR) mission to the Joint Center for Control and Coordination on the ceasefire regime (JCCC) says that Kiev forces have shelled six more settlements in DPR, in violation of the Minsk agreements.

Late on Saturday, the DPR people’s militia said that Ukrainian security forces had fired 424 shells and mines on the territory of the self-proclaimed Donetsk People's Republic.
21:36 GMT 19.02.2022
Explosions Sound Off in Outskirts of Donetsk, Correspondent Reveals
DONETSK (Sputnik) - Sounds of explosions are heard coming from the outskirts of Donetsk, a Sputnik correspondent reports.

On Friday, an explosion occurred near the DPR government building in the center of Donetsk. DPR said that a security official's car was blown up.
21:16 GMT 19.02.2022
Zelenskyy Discusses With Macron Escalation in Donbas, Ways to Resolve Situation

Had an urgent conversation with President @EmmanuelMacron. Informed about the aggravation on the frontline, our losses, the shelling of 🇺🇦 politicians & international journalists. Discussed the need and possible ways of immediate de-escalation & political-diplomatic settlement.

Employees of the main investigative directorate and experts of the central office were dispatched to the city of Rostov-on-Don near the Ukrainian border to organize and coordinate the operations of the committee staff in the region, upon Bastrykin's order.

The main task of the staff is to detect evidence of criminal actions of the Ukrainian forces in Donbas and inform the committee head about the situation, according to the agency.

On Friday, the self-proclaimed Luhansk People's Republic and Donetsk People's Republic announced the evacuation of their citizens to the Rostov region over the escalation of tensions on the contact line.
19:42 GMT 19.02.2022
Russian Ministry of Emergency Situations to Carry Out Evacuations in LPR, DPR 'Around the Clock'
19:29 GMT 19.02.2022
Russia's Mission to OSCE Surprised by Body's Leadership's Reaction to Situation in Donbas
VIENNA (Sputnik) - Russia's Permanent Mission to the Organization for Security and Co-operation in Europe (OSCE) said on Saturday that it is surprised by the reaction of the organization's leadership to the developments in eastern Ukraine.

"Surprised by reaction of OSCE CiO Z.Rau, his Special Rep. for Ukraine M.Kinnunen & OSCE SG H. Schmid on the situation in eastern Ukraine. All them reproduced statements of [Ukraine's] military command that 'reports on preparations by #UkrainianArmedForces for an offensive are disinformation'," the mission said on Twitter.

The mission also expressed regrets that Rau and Kinnunen once again did not listen to Russia's warnings made during their visit to Moscow on Tuesday.

"All this instead of calling on Kiev to comply w/ #MinskAgreements & Measures to strengthen ceasefire of 22/07/2020. Meanwhile, they were silent when @OSCE_SMM confirmed in Oct.2021 offensive actions by [Ukraine's] ArmedForces in southern Donetsk region. Impartiality, you say?" the mission tweeted.
18:18 GMT 19.02.2022
'Independent Non-Aligned Ukraine Would Provide a Buffer Against War for Both Sides', Former US Senator Says

Russia-NATO Row on European Security
Ukraine Could Avoid Destabilising Region if It Was More Independent, Ex-US State Senator Says
18:17 GMT 19.02.2022
Lugansk: Over 3,100 People Evacuated From LPR to Russia on Saturday
Over 3,100 people were evacuated on Saturday from the self-proclaimed Lugansk People’s Republic (LPR) to Russia after the authorities of the Donbass republics announced mass evacuation over the deterioration of the situation in the region.

"As of 5:00 p. m. [15:00 GMT], the enemy opened fire 39 times on the DPR territory... launching 424 shells and mines. Areas of 21 settlements in the DPR came under fire. Various types of grenade launchers and small arms were also used. In total, more than 627 shells, mines and grenades were fired on the DPR territory," the militia said in a statement.

Furthermore, the DPR mission to the Joint Center for Control and Coordination on the ceasefire regime (JCCC) reported that the operation of a pumping station in the Vasilievka village was halted due to the transformer explosion after shelling on Saturday.

According to the statement, the Ukrainian security forces were aware about the presence of the JCCC representatives and media in the area when opened fire on the Vasilievka pumping station.

"The enemy opened fire on the area where the representatives of the JCCC, people's militia and media crews were present. A particular cynicism lies in the fact that the Ukrainian militants perfectly saw who they were firing at, as they used a drone to adjust the shelling," the statement read.

The DPR militia added that the facts of ceasefire violations have been promptly reported to the Ukrainian side in the JCCC.

According to the DPR, the settlements of Horlivka, Komunarovka and Dolomitne were targeted.

"We will stop oligarchs from being able to move their money internationally. We will stop them from traveling we will make it tougher for Russian companies to tap into our capital markets. We are also going to make it harder for Russia to access sovereign debts markets," Lizz Truss told the Munich Security Conference.

Truss also said that today’s events are one of the most "dangerous moments" for European security since the last century.
"We need to show unprecedented unity. There are many people who want to think hopefully about the situation but I think we need to prepare for the worst-case scenario and that worst-case scenario could happen as early as next week," Truss said.
16:28 GMT 19.02.2022
DPR: Kiev's Forces Shelled Pumping Station Knowing Journalists, OSCE Officials Were There at the Time
16:24 GMT 19.02.2022
Zelensky: Ukraine Needs Security Guarantees From Leading Countries While It Is Not Member of NATO
Newsfeed
0
Access to the chat has been blocked for violating the rules . You will be able to participate again through:∞. If you do not agree with the blocking, please use the feedback form
The discussion is closed. You can participate in the discussion within 24 hours after the publication of the article.
To participate in the discussion
log in or register
loader
Chats
Заголовок открываемого материала