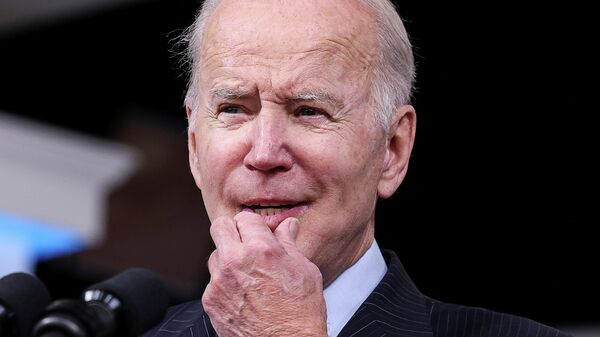 Subscribe
On Friday, the WHO dubbed the new South African COVID strain "Omicron", and identified it as a variant of concern, saying that a high number of mutations (32) could make the virus more transmissible and dangerous.
The new coronavirus strain has been spreading over the past few days, with France, Germany, Canada, Australia, Denmark, and a number of other countries reporting their first cases. Many nations have since restricted entry from countries in southern Africa, prompting a strong reaction from South Africa, which said that it's being punished for "excellent science".
Follow Sputnik's Live Feed to Find Out More!
New firstOld first
19:52 GMT 29.11.2021
UN Says Blanket Barring of Citizen Over Omicron Variant 'Form of Collective Punishment’

“We think there are more science‑based solutions... increased testing and even if people need to go into quarantine, but blanket barring of certain citizens is a form of collective punishment in a way,” UN spokesperson Stephane Dujarric said on Monday.

Dujarric also noted the uncertainties expressed earlier by the World Health Organization (WHO) regarding the transmissibility of the new variant and the efficacy of vaccines against it.

“We need to be guided by science,” he said.
19:51 GMT 29.11.2021
US Ready to Give South Africa More COVID-19 Shots - White House
"We are prepared to provide [South Africa] with additional doses when they’re prepared to receive them," White House Press Secretary Jen Psaki said on Monday.

The US has sent close to 8 million COVID-19 vaccine doses to South Africa so far, and over 93 million to the African continent as a whole, Psaki said.
18:30 GMT 29.11.2021
Canada's Quebec Discovers First Case of COVID-19 Omicron Variant
WASHINGTON (Sputnik) - The Canadian province of Quebec has reported the first case of infection with the newly discovered novel coronavirus variant Omicron, Provincial Minister of Health and Social Services Christian Dube said on Monday.
“We can confirm that at this moment first case of the new variant has been confirmed in Quebec this morning,” Dube said during a press briefing.
17:11 GMT 29.11.2021
'Don't Wait': Joe Biden Urges Americans to Vaccinate, Says Omicron Strain Will Eventually Hit US
WASHINGTON (Sputnik) - The newly-identified Omicron variant of the coronavirus is a cause for concern but not for panic, US President Joe Biden said on Monday.
"This variant is a cause for concern, not a cause for panic ... We have more tools today to fight the variant than we've ever had before," Biden said.
Biden noted that the Omicron coronavirus variant is expected to reach the United States soon and urged the public to get fully vaccinated or have booster shots, adding that the vaccines available should provide some protection against the new strain.
"Sooner or later we gonna have these cases in the United States ... Don't wait...You have to get your vaccine," Biden said in an address to the nation.
The US administration will reveal on Thursday its strategy to fight the anticipated surge of coronavirus cases this winter, but the strategy will not include imposing lockdowns, Biden said. The strategy will focus on facilitating more widespread vaccinations, boosters, testing, among other efforts, he added.
Moreover, Biden said he does not anticipate additional travel restrictions due to concerns over the Omicron variant.
Biden said he will direct the Food and Drug Administration as well as the Centers for Disease Control and Prevention to use the quickest process available to approve any modified vaccines designed to protect against the Omicron variant. Biden said his administration is already working with officials at Pfizer, Moderna, and Johnson & Johnson to develop contingency plans to make and deploy modified vaccines or boosters if needed.
16:38 GMT 29.11.2021
UK to Extend COVID-19 Booster Vaccine to 18-Year-Olds Amid Fear Over Omicron Variant
LONDON (Sputnik) – The UK Joint Committee on Vaccination and Immunisation (JCVI) advised health authorities on Monday to extend the COVID-19 booster vaccine to all people aged 18, in an attempt to tackle the spreading of the Omicron variant of the novel coronavirus SARS-CoV-2.
The vaccine watchdog, which had previously advised the government to offer a third dose for those aged over 40 years or at higher risk from the disease no sooner than six months after the second injection, has now shorten the gap in half.
"In response to the changing risk posed by the Omicron variant, the booster will now be given no sooner than 3 months after the primary course," the JCVI said in a statement.
It also recommended to offer a second jab to children aged between 12 and 15 years old after no less than three months and give severely immunosuppressed people access to another booster.
Later on, UK Health Secretary Sajid Javid told Parliament that he accepted the JCVI advice "in full," adding that the new measures "will protect more people, more quickly."
On Friday, the World Health Organization identified the new strain of the coronavirus first reported in South Africa, Omicron, as one of concern, since it may be more transmissible and dangerous. Cases of the new variant have already been confirmed in multiple countries and governments rushed to suspend travel with southern African nations in order to prevent the spread of the new strain.
In the United Kingdom, where nine positive cases have been confirmed so far, face coverings will be mandatory on public transport and in shops and other closed settings including banks, post offices and hairdressers from Tuesday, when isolation rules will return for international arrivals until they receive a negative PCR test for COVID-19.
As of Monday, more than 46.3 million people in the UK – 80.6% of its population aged 12 and older – have been fully vaccinated against COVID-19, while 17,8 million have had a booster or third dose, according to the latest data released by the Department of Health and Social Care.
15:41 GMT 29.11.2021
UN Chief ‘Deeply Concerned’ About Travel Restrictions Slapped on Southern African Nations Over Omicron Scare
15:38 GMT 29.11.2021
G7 Health Ministers Committed to Share Data on Omicron With WHO
"In the coming weeks, ministers committed to continue to work closely together, with WHO and international partners to share information and monitor Omicron. Ministers committed to meeting again in December,” the G7 health ministers say in a joint statement.
15:27 GMT 29.11.2021
India: Bodies of Two COVID Patients Who Died in 2020 Found Rotting in Mortuary
The bodies of two COVID-19 victims were found at the ESI hospital mortuary in Rajajinagar in Bengaluru, over 15 months after they died. The development has drawn sharp reactions from the public against the ESI hospital staff and doctors for negligence in their handling of dead bodies.
Rajajinagar lawmaker Suresh Kumar has written to Karnataka Labour Minister Shivram Hebbal seeking an inquiry into the incident.
The authorities were planning to cremate the bodies on Monday, as the family and relatives of one of the deceased did not show any interest in taking the body for final rites.
Meanwhile, the police were unable to trace the whereabouts of the other deceased person’s family.
The bodies were recovered on Friday by the cleaning staff, who went to clean the old mortuary and noticed a foul smell emanating from the freezers and the found bodies.
15:19 GMT 29.11.2021
New Sputnik V Version Adapted to Omicron Variant in Development - RDIF

"In order not to waste time, we are tackling these two tasks in parallel until data and more information on whether a vaccine is appropriate or not is available," BioNTech’s spokesperson told the DPA agency.

"The new virus variant underscores the need for rapid vaccination with first and second doses for those who have not received them, and a booster dose for those who are eligible", Health Minister Ingvild Kjerkol said.

11:05 GMT 29.11.2021
Sturgeon Says It's Possible But Not Probable That New COVID Cases in Scotland Linked to COP26 Summit
11:03 GMT 29.11.2021
Markets' Reaction to Omicron Strain Emotional, Not Based on Scientific Data - Kremlin
MOSCOW (Sputnik) - The reaction of the markets to the new Omicron coronavirus strain is purely emotional and is not based on any scientific data, Kremlin spokesman Dmitry Peskov said on Monday.

"We see that in the markets this reaction is purely emotional, it is not based on any scientific data, because they simply do not exist yet," Peskov said, commenting on the concern in economic and energy plan, caused by the emergence of the new strain.

Answering a clarifying question, whether this reaction is short-lived, Peskov replied in the affirmative.

"Of course, this is a purely emotional reaction," he told reporters.

"I am expecting we will top over 10,000 cases by the end of the week per day", epidemiologist and Vice President of the International Science Council Salim Abdool Karim said.

"We're all in isolation except for the youth team that didn't play on Saturday, 44 people are in isolation at home," a club spokesman said on Monday. "Two or three players and two or three staff have symptoms, but nothing too serious, the rest are asymptomatic. Everyone is waiting to repeat the tests, as soon as the health authority authorises it", he added.