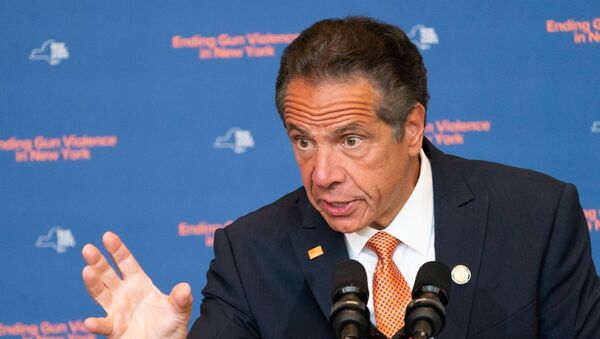 Live Updates: NYC Transport Workers Will Be Required to Get Vaccinated or Tested Weekly - Cuomo

The United States reached a milestone on Monday with 70 percent of adults having received at least one dose of the coronavirus vaccines, White House COVID-19 Data Director Cyrus Shahpar said.

The seven-day average of newly vaccinated individuals is the highest it has been since the week of July 4, during which time there was a large vaccine advocacy campaign.

However, only 40 percent of Americans believe that the situation is getting better, according to the results of a Gallup poll released on Monday.

60% of all adults in the EU are now fully vaccinated.

Full vaccination protects us from #COVID19 and its variants.⁰

Let's stay vigilant. Let's get vaccinated! For our own health – and to protect others. pic.twitter.com/cWiKmkzmxS

The Cabinet has decided to allow holding one-day open-air festivals with a maximum of 750 participants starting August 14 under certain conditions, the news said. First, all visitors must be vaccinated or have a negative test result for COVID-19, taken no later than 24 hours before the event. Those who have recovered from COVID-19 within the past six months will also be admitted to the festivals after presenting medical document confirming their state of health.

On July 26, the Dutch authorities have extended the ban on multi-day festivals until September 1.

The Armenian health ministry said on Monday that the Delta coronavirus variant was found in several samples of patients with positive COVID-19 test results.

"The National Center for Disease Control, the Russian-Armenian University, and the Institute of Molecular Biology of the National Academy of Sciences of the Republic of Armenia conducted a joint molecular-genetic study of the samples of patients with positive PCR tests. Four out of 30 samples contained the British strain [the Alpha variant] and 25 the Delta variant," the ministry said.

The Ministry of Health and Prevention of the United Arab Emirates has approved the emergency use of the Sinopharm coronavirus vaccine for children aged 3-17, the Emirates News Agency (WAM) reported on Monday.

The decision is based on the results of clinical studies and a "strict" assessment process for the emergency use authorization as well as a local evaluation in line with the country's regulations, the news release read.

The United Arab Emirates has so far vaccinated 77.9% of population with at least one dose, while 69.3% have been fully vaccinated. The Middle Eastern country permits the use of the vaccines by Pfizer/BioNTech, Sinopharm and Russia's Sputnik V.

Myanmar is facing a severe humanitarian crisis fueled by an upswing in COVID-19 infections and unrelenting violence, according to a joint statement by 16 aid agencies released on Monday.

"Six months since the military’s seizure of power, aid agencies are warning of a spiraling humanitarian catastrophe in Myanmar triggered by skyrocketing Covid-19 cases and widespread violence in the country. Over 60 per cent of reported deaths from Covid-19 in Myanmar have occurred in the past month alone, with the number of confirmed cases doubling in the last two months," the statement said.

Healthcare facilities are not operating at their full volume, with over 400 doctors and 180 nurses given arrest warrants since the military coup in February 2021, the statement read.

The aid agencies, operating in Myanmar, called on the government to speed up vaccination campaign, put an end to attacks on healthcare facilities and workers and implement the ASEAN five-point consensus.

On 10 April, ASEAN members agreed to implement a 5-step plan for settling the Myanmar crisis, including cessation of violence; dialogue between various parties; appointment of an ASEAN special envoy to mediate in the peace process; and facilitation of humanitarian aid.

Myanmar is experiencing a third wave of COVID-19, with over 60% of total coronavirus-related deaths registered in the past month. In a sluggish immunization drive only 3.6 million vaccine doses were administered to the country’s 54.4 million population, which is enough to fully vaccinate fewer than 3% of citizens.

On 1 February, the Myanmar military overthrew the civilian government and declared a year-long state of emergency. The coup triggered mass protests, which were quashed with deadly violence, resulting in the death of over 700 people in six months. Additionally, about 3,000 protesters were detained, according to rights activists.

Venezuelan President Nicolas Maduro assured the nation that in the coming days 6,200,000 vaccines purchased by his government through the WHO-led vaccine-sharing COVAX mechanism will arrive in the country.

Meanwhile, the Venezuelan vice president, Delcy Rodriguez, said that about 19 % of the population had been vaccinated to date.

"We are already approaching 19% of vaccination and people over 40 can send a text message with their identity card number to schedule a vaccination appointment through a [special governmental telephone] number," she explained.

The government also reported that in the last week there were four more cases of the Delta coronavirus variant, all of them originating from abroad, prompting it to alert the population to measures needed be taken to prevent a rapid spread of the disease.

According to Johns Hopkins University, the death toll in Venezuela has risen to 3,607 people, and the number of detected cases to more than 300,000 people.

Moscow has the highest number of new cases with 3,330 daily infections, up from 2,484 the day before. The Russian capital was followed by St. Petersburg with 1,914 cases, up from 1,911, and the Moscow region with 1,596 cases, down from 1,658. No new cases were registered in the Chukotka autonomous region.

The response centre reported 785 new deaths linked to the coronavirus, down from 789 the day before, raising the country's total death toll to 160,137.

he Afghan government is ready to provide vaccination against the coronavirus for people living in areas controlled by the Taliban movement (outlawed as a terrorist group in Russia), senior presidential adviser Qalamuddin Shinwari said.

"As for Taliban-controlled territories, the health ministry officially stated that it is absolutely impartial in terms of providing medical assistance. If the Taliban provide necessary conditions, special teams will be deployed to these areas to vaccinate the population. As the Taliban are an armed group, there is no question of medical assistance with them," Shinwari said.

"Yes, absolutely," Shinwari added, when asked if the Afghan government is ready to promote humanitarian deliveries, including those assisting the coronavirus fight, to Taliban-controlled areas.

More than 472 million coronavirus vaccine doses have been administered in India and the COVID-19 recovery rate in the country stands at 97.35 percent, according to Monday data from the Ministry of Health and Family Welfare (MoHFW).

India started its mass vaccination campaign in January. The country remains the world's second in terms of the total number of confirmed coronavirus cases, currently standing at over 31.6 million. India’s COVID-19 death toll has surpassed 424,300.

Last month, Indian Prime Minister Modi warned that the key to preventing another coronavirus spike was adherence to safety protocols rather than forecasts on a possible third wave.