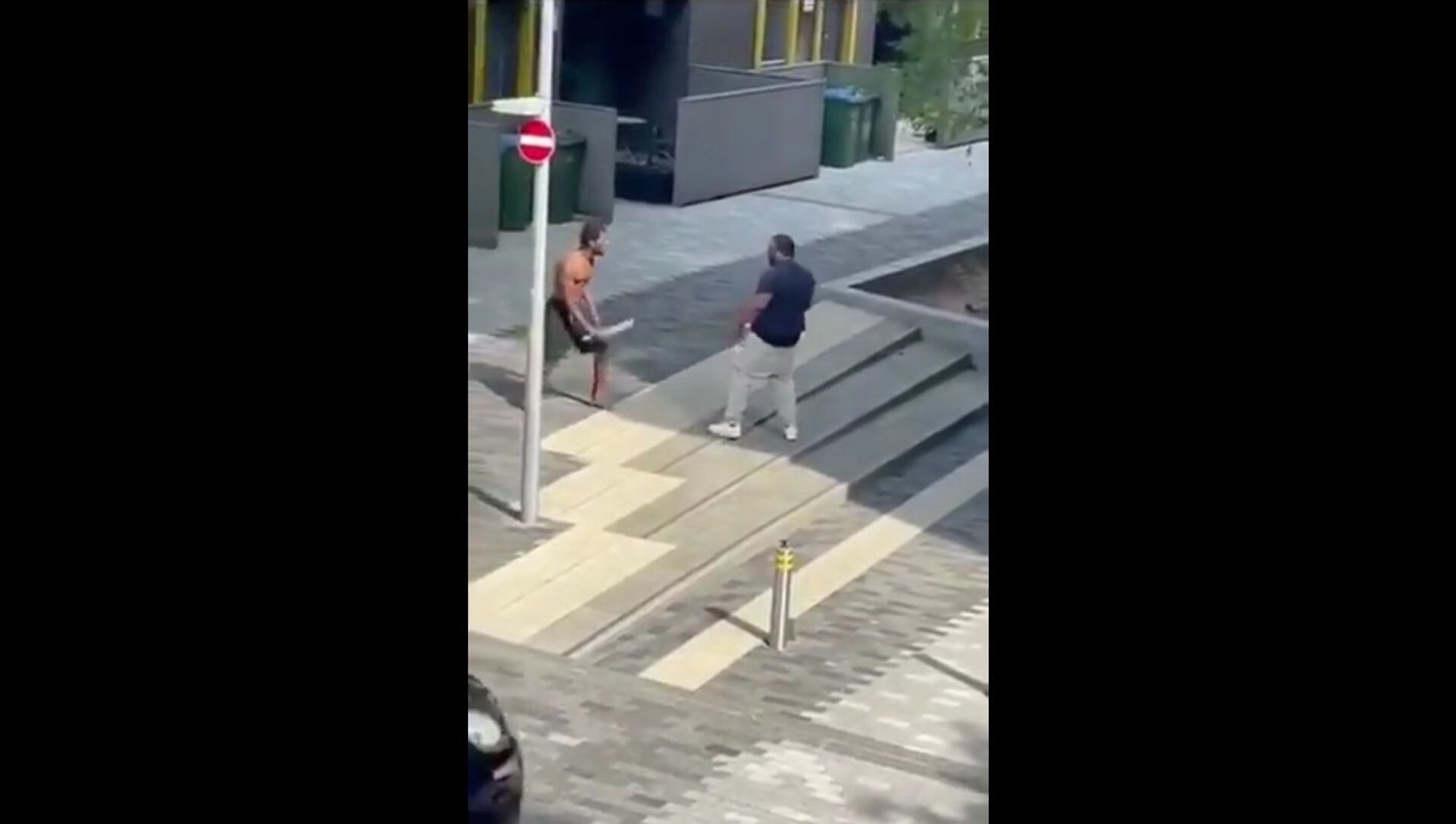 Wednesday's terrifying street fight lasted eight minutes and circled blocks of flats on a hot day in the south-east London district of Greenwich. Residents shouted at the four men involved to stop fighting, while others called for the police.

An upmarket community in south-east London has been left reeling after a man was stabbed and left in a critical condition in a broad-daylight street fight.

Video taken by eyewitnesses in the quiet Greenwich street on Wednesday afternoon show a barefoot man dressed only in shorts brandishing a machete at another man, also apparently armed with a large knife, as two more men throw bottles at the half-dressed man in a bid to drive him off.

The Metropolitan Police said they were called to the scene at 4:23 pm, and found a man with stab wounds, who had to be airlifted to hospital in a critical condition.

"There were four guys — they got into a fight and all of them had a knife," one witness said. "One of them had a machete almost 20 inches long."

Video: Police Attacked by Mob After Responding to Shooting and Stabbing in Brixton
"It looked like three of the guys were fighting the fourth. They all seemed to be on the same side, apart from him," the witness added. "The fight went on in a big circle around the buildings — it covered about 200 metres and it went on for about eight minutes."

"They were chasing each other, throwing bottles at each other, using the knives - it looked like more than just one was wounded, but the man who was injured looked to be in a bad way. They said he wasn't doing well."

Residents can be heard shouting at the men to stop fighting and urging others to call the police in the videos, as the brawl continues down several streets in between blocks of flats near the river Thames. The

​Locals tweeted their harrowing accounts of the fight's aftermath, or images of the helicopter air ambulance landed nearby.

​Police appealed for witnesses to the crime via Twitter.

The street fight was just one of an epidemic of knife and gun attacks in the British capital this week as the relaxation of COVID-19 restrictions coincides with glorious summer weather.

A man in his twenties was shot and stabbed in Brixton on Wednesday night. A mob of local residents attacked police who attended the scene, throwing objects at them.

On Tuesday night a man was attacked by a gang of youths in central London's Hyde Park, punching kicking and stabbing him with a huge knife.

And on bank holiday Monday an 18-year-old man was stabbed to death at a tennis court in Barnet, north London