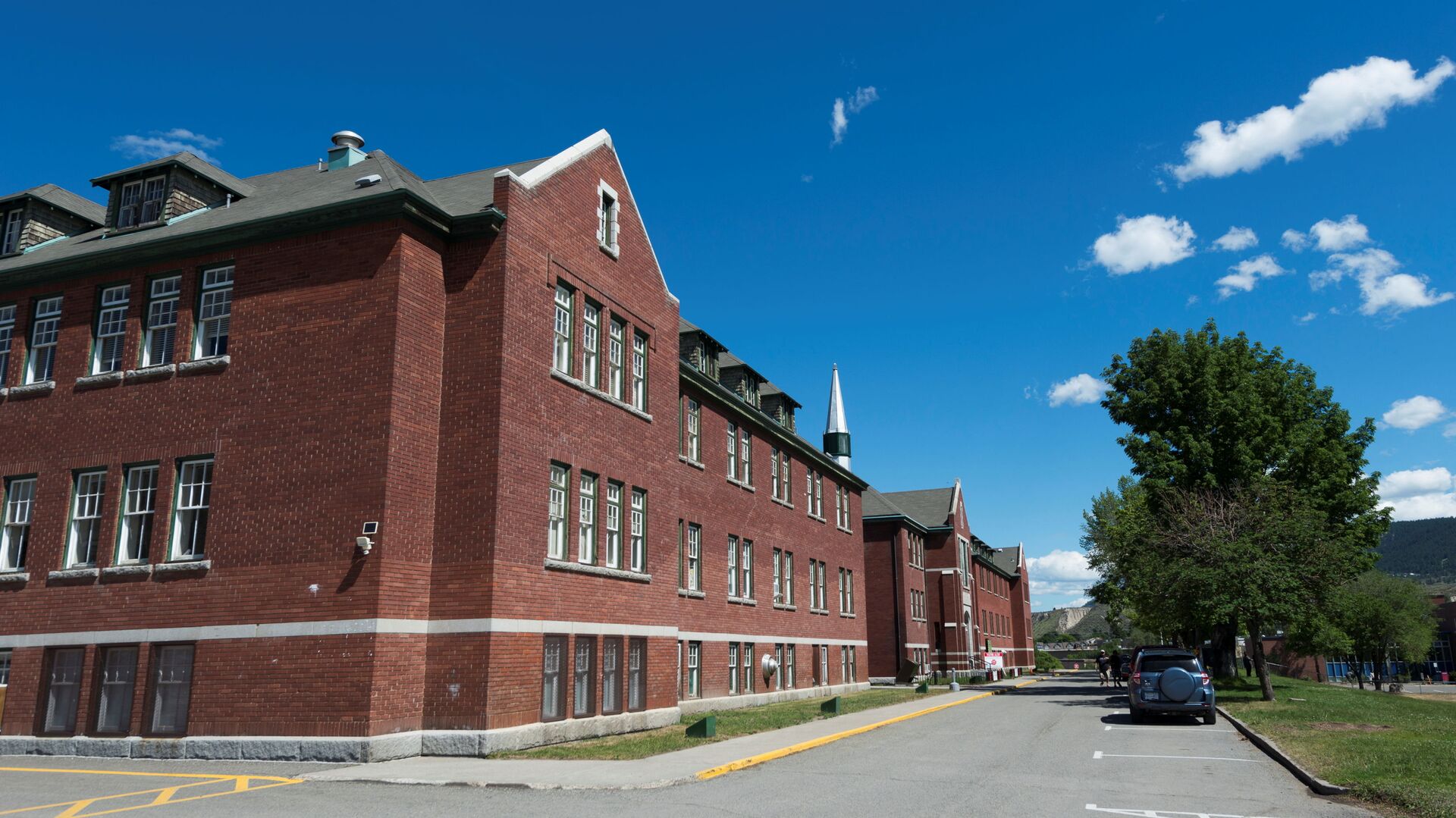 Kirill Kurevlev
Correspondent
All materialsWrite to the author
The Kamloops Indian Residential School was one of dozens of boarding schools found by the Canadian government's Department of Indian Affairs in the 19th century to assimilate native people into "European cultural practices." Children were forcibly taken from their families, and in schools, they were systematically subjected to abuse and neglect.

The remains of 215 indigenous children, some as young as three years old, were discovered buried at a former residential school in Canada. According to a statement from Tk'emlups te Secwepemc Nation, a native group, the children were pupils at the Kamloops Indian Residential School in British Columbia, which was shut down in 1978.

The bones were discovered with the help of a ground-penetrating radar specialist. None of them have been identified, and the causes of death remain unknown to date. According to the statement, survivors are concerned that more deaths will be discovered at the same location, as well as the other 80 former residential school locations across Canada.

“We had a knowing in our community that we were able to verify. To our knowledge, these missing children are undocumented deaths,” stated Kukpi7 (chief) Rosanne Casimir. “Some were as young as three years old. We sought out a way to confirm that knowing out of deepest respect and love for those lost children and their families, understanding that Tk’emlúps te Secwépemc is the final resting place of these children.”

Chief Casimir added that according to the organization's understanding, the missing children "are undocumented deaths." 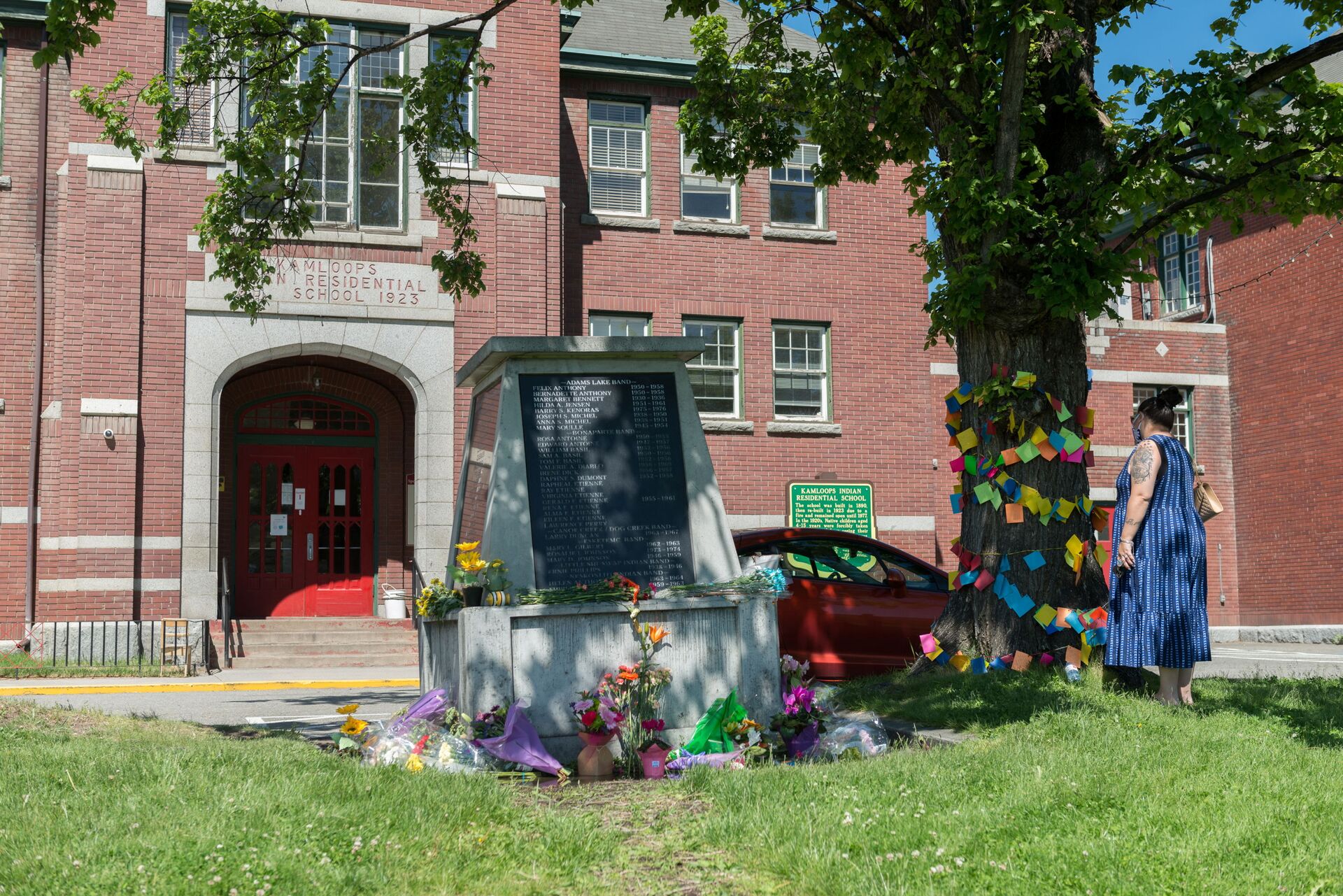 A woman reads cards of condolences tied to a tree next to a monument to the survivors of the former Kamloops Indian Residential School, after the remains of 215 children, some as young as three years old, were found at the site in Kamloops, British Columbia, Canada May 29, 2021.
© REUTERS / DENNIS OWEN

Casimir also stated they began exploring the school grounds for the corpses of missing children in the early 2000s because they had long felt that the official explanations for the runaway children were part of a state cover-up.

"It's a harsh reality and it's our truth, it's our history," Casimir reportedly said at a press conference on Friday, according to the Daily Mail. "And it's something that we've always had to fight to prove. To me, it's always been a horrible, horrible history."

Children Vanished, Were Never Heard From

Friends and classmates of those who attended the school disappeared unexpectedly and were never seen or heard from again, according to survivors.

One of the children attending the Kamloops school, Chief Harvey McLeod of the Upper Nicola Band, said the terrible finding brought back sad memories of his time there, CNN reported following the news of the discovery.

"I lost my heart, it was so much hurt and pain to finally hear, for the outside world, to finally hear what we assumed was happening there," McLeod is quoted in the report as saying. "The story is so unreal, that yesterday it became real for a lot of us in this community."

McLeod was sent to the school with seven of his siblings in 1966, and he claims he was physically and sexually abused there. He reportedly said parents were also students at the institution, and he believes it must have been traumatic for them to drop their children off there knowing what was in store for them. 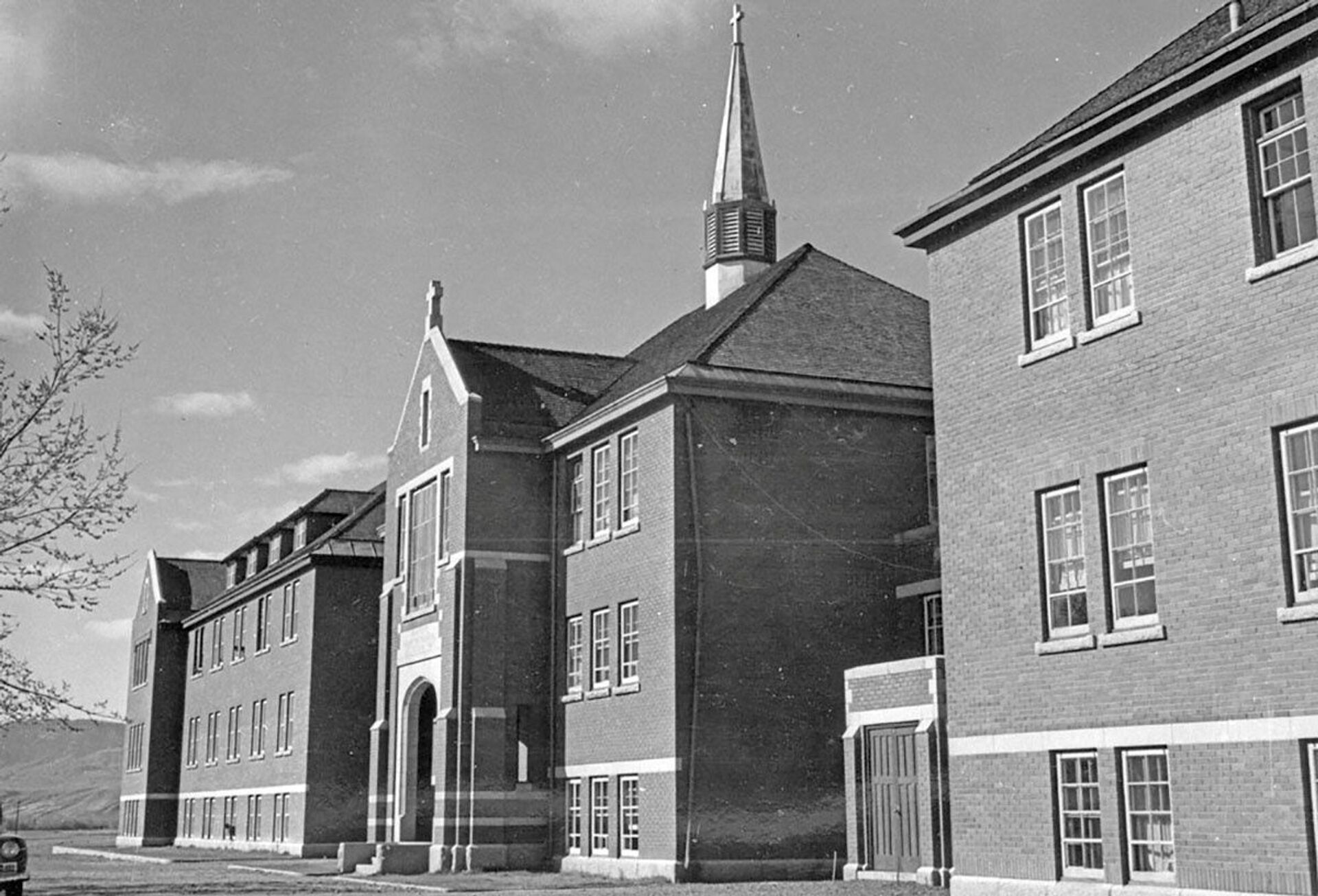 The main administrative building at the Kamloops Indian Residential School is seen in Kamloops, British Columbia, Canada circa 1970.
© REUTERS / LIBRARY AND ARCHIVES CANADA

He added that living survivors of the school had wondered for decades about the fate of their fellow students who vanished.

"Sometimes people didn't come back, we were happy for them, we thought they ran away, not knowing if they did or whatever happened to them," he said. "There were discussions that this may have happened, that they may have passed. What I realized yesterday was how strong I was, as a little boy, how strong I was to be here today, because I know that a lot of people didn't go home."

The inquiry will continue in collaboration with the British Columbia Coroner's Office, and community and government officials will ensure the remains are secured and identified, according to community leaders. Lisa Lapointe, the chief coroner, issued a statement on Friday, noting that her office is still gathering information.

The preliminary results of an investigation are reportedly expected by mid-June.

The National Truth and Reconciliation Commission of Canada's run investigation found as a result of a six-year review into Canada's now-defunct residential school system that it constituted "cultural genocide" by forcefully separating indigenous children from their families. Many of the 150,000 children who attended the schools, which were usually managed by Christian churches on behalf of state governments from the 1840s to the 1990s, suffered horrible physical abuse, rape, hunger, and other atrocities, according to the Daily Mail.

More than 4,100 students died in residential schools, according to the investigation's findings.

The deaths of the 215 children buried in the grounds of what was formerly Canada's largest residential school are believed to have been overlooked and unreported until the finding was made public.

Many Canadian politicians and ordinary citizens were shocked by the discovery, as public outrage continues to mount, while many people continue to carry flowers and baby shoes to the temporary memorial sites established by the former school and the Vancouver Art Gallery.

The news also shocked Canadian Prime Minister Justin Trudeau, who described it as "a painful reminder of that dark and shameful chapter of our country’s history."

"The news that remains were found at the former Kamloops residential school breaks my heart - it is a painful reminder of that dark and shameful chapter of our country’s history. I am thinking about everyone affected by this distressing news. We are here for you."

​Canadian Minister of Crown-Indigenous Relations, Dr. Carolyn Benntett echoed the words of the prime minister, calling the loss of children who went to these schools "unthinkable."

The premier of British Columbia, John Horgan, said in a statement that the discovery of 215 remains had left him "horrified and heartbroken," as this was a "stark example of the violence the Canadian residential school system inflicted upon Indigenous peoples and how the consequences of these atrocities continue to this day."

Horrified and heartbroken to learn the burial site of 215 children has been confirmed on the grounds of the former Kamloops residential school.

I honour Tk'emlúps te Secwépemc as they grapple with this burden from a dark chapter of our history.https://t.co/EkJXilLziR

However, some social media users said the government  of the country was not to blame for what happened, but rather the Catholic Church must be held accountable, as they ran the schools. At the same time, others urged Canadians to wait for the investigation to come to an end first.

We have to tell the complete story. These children were taken from their families. I feel sick writing those words. What is wrong with some people, to think they are superior to others and it's ok to inflict pain? Lifelong pain.

Canada put Indigenous children into a Residential School System to strip them of their heritage, language, and identity. They suffered physical, mental, and sexual abuse.

Thursday, the remains of 215 children were found at the Kamloops Residential School in British Columbia 😢 pic.twitter.com/NmGcmLmUGs

Trudeau reportedly formally asked Pope Francis to apologize for the Catholic Church's involvement in the school system in 2017.

The Canadian Conference of Catholic Bishops issued a statement the following year, indicating that while the Pope would not personally apologize, he had not "shied away from recognizing injustices faced by indigenous peoples around the world."

Many netizens, at the same time, were puzzled over the strangely low coverage of the terrifying discovery in the national media, noting that either one or two lines have been given to the shocking revelations, or it is not mentioned at all.

Why isn’t this in the media a lot? Remains of 215 Residential school children were found in Kamloops British Columbia Canada. If y’all don’t know what a residential school is it’s where they tortured indigenous people for being indigenous. Rest In Peace little angels…. 🥺

That the story of 215 dead children is only given this space on the front page of “our national newspaper” says a lot about where we’re at. I want the media to make me live and breathe this story for weeks; months. It should be everywhere. I shouldn’t be able to forget it. pic.twitter.com/LGk8Urs4Nc

"Owning a cottage is becoming a pipe dream, even for Canada's wealthy," frets the front page of the Post, which makes no mention of the remains of 215 children found at a former residential school: pic.twitter.com/GT9J8O9pCw

According to local media, the Tk'emlups te Secwepemc Nation's decision on how to continue will determine whether the discovery leads to a class-action lawsuit against the church or the state, or perhaps an attempt to pursue criminal charges. Moreover, identifying the victims and establishing a picture of who they were, as well as determining whether they have surviving family, could impact the outcome of any future legal proceedings.

Nonetheless, the report's legal experts predict that the finding will result in a new wave of lawsuits, but no criminal prosecutions.