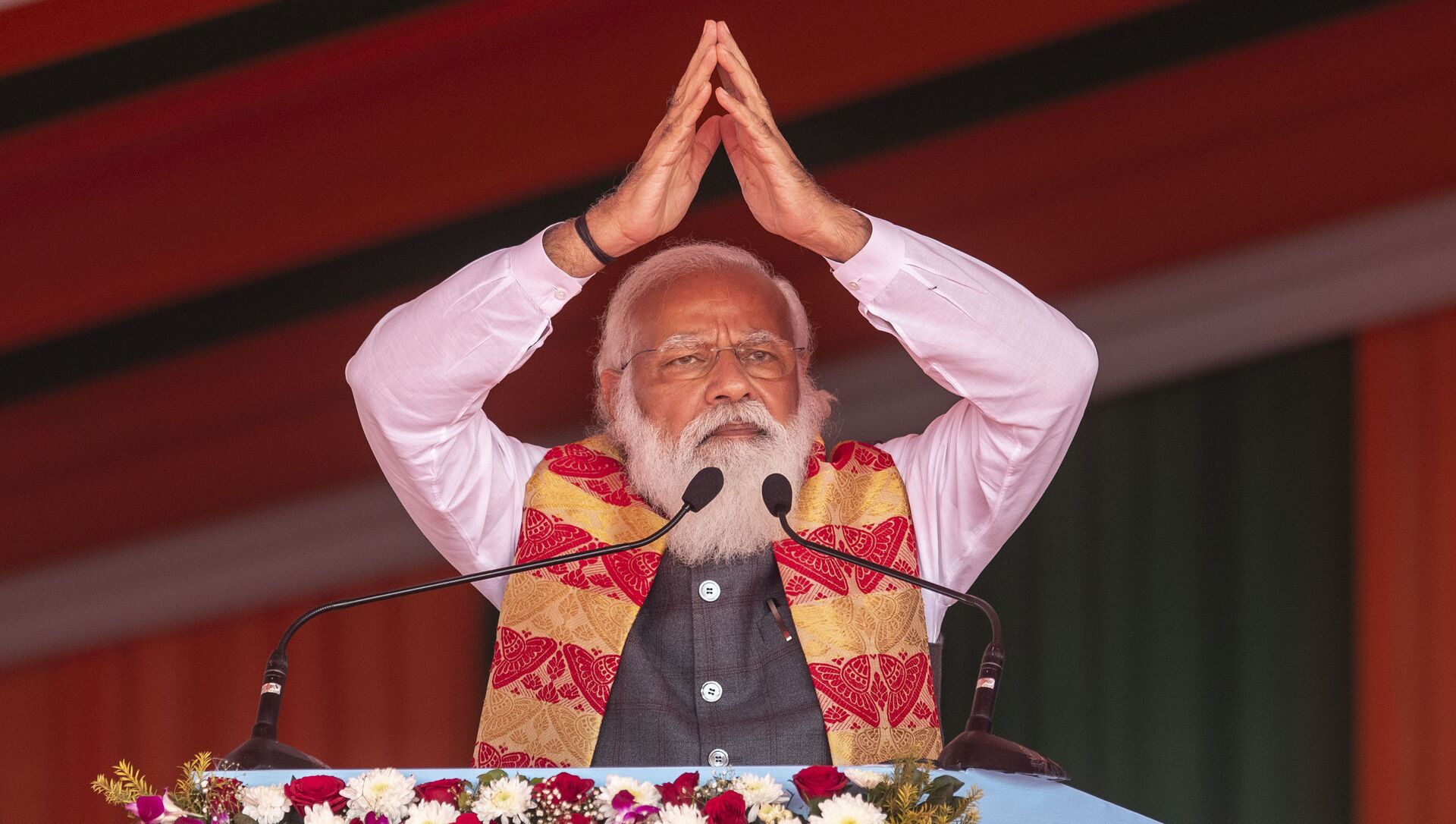 Dhairya Maheshwari
All materials
The four-day COVID vaccine "festival" kicked off by Indian Prime Minister Narendra Modi comes amid a crippling domestic shortage of jabs, with at least 10 Indian states saying that their supplies will run out within days. The federal authorities, however, say that the South Asian country is facing no shortage of vaccines.

Indian Prime Minister Narendra Modi on Sunday kicked off a four-day "Tika Utsav" (vaccine festival) in a bid to encourage vaccination against COVID among the population, calling for community-led initiatives to curb the second wave of coronavirus.

​In his appeal to the Indian population, Prime Minister Modi laid out a four-point plan that he said would encourage "social and personal hygiene" in the South Asian nation, which has been facing a virulent second COVID wave.

Jab Shortage: Maharashtra Leader Threatens to Stall Vehicles From Transporting COVID Vaccines
As part of his proposed strategy for the coming days, Modi said that citizens across the country must join together to encourage eligible beneficiaries to go to vaccine centres, encourage the use of masks, and help the financially-distressed in COVID management.

Further, the Indian PM also called for the establishment of "micro-containment zones", as part of community-led initiatives, at places with new COVID infections.

"We must also ensure that we render all possible assistance to the health officials involved in administering the vaccine. We should also ensure that not even a dose of COVID vaccine goes wasted", stated Modi. "We must also move towards optimum utilisation of our available vaccine capacity".

The government-led "Tika Utsav" comes amid a record spike in COVID cases in the country this week. To date, India has reported more than 13 million cases, resulting in more than 169,000 deaths, according to the Health Ministry.

India has registered more than 100,000 COVID infections for five consecutive days, marking the worst chapter in the nation's COVID epidemic since the first case was reported on 30 January 2020.

The country's recent average daily caseload, with more than 145,000 new infections reported on Saturday, has been the worst in the world for most of the week.

The four-day "Tika Utsav" also kicked off as the country faces a crippling domestic shortage of COVID jabs, with at least 10 Indian state governments having warned the federal authorities that their jabs won't last for more than 3-4 days.

Ex-Indian Minister: India’s Youth Must be ‘Prioritized’ over PM Modi’s COVID Vaccine Diplomacy
The COVID jabs are in short supply in the western state of Maharashtra, the worst-hit in the country, Punjab, Odisha, Andhra Pradesh, Jharkhand as well as the national capital Delhi, as per health officials in these states.

Adar Poonawala, who heads the Serum Institute of India (SII), warned this week that the production facilities at his factory, the largest vaccine production centre in the world, have been "severely stressed".

Prominent Indian opposition groups have also demanded an "immediate moratorium" on the export of vaccines, as they call for including people below the age of 45 in the ongoing COVID vaccination drive.

In a letter to Prime Minister Modi on Sunday, a Delhi assembly legislator and a politician from the regional Aam Aadmi Party (AAP) pointed out that while several Indian states have run out of COVID jabs, New Delhi has exported nearly 64 million doses of COVID vaccines to 84 different countries.

"I wish to ask the government of India as to what their priority is — the people of Delhi or the Dominican Republic. The people of Maharashtra or of Mauritius? The people of Bengal or Bangladesh? Gujarat or Guyana? Odisha or Oman? Uttar Pradesh or the United Kingdom? Kerala or Kenya?", wondered Chadha.

He further complained that the humanitarian aid that India was rendering to other countries must not come at the cost of Indians, particularly "young India", which Chadha said was waiting for its turn to get vaccinated.

Compared to the 64 million doses of vaccine that India has exported to 84 countries, the health authorities have administered jabs to over 100 million Indians to date.

Faced with massive criticism over its "COVID diplomacy" and shortage of vaccines, federal Health Minister Dr Harsh Vardhan has accused the states of "fear-mongering", also denying reports that the country is in the throes of any vaccine crunch.

Modi Govt must understand that Covid Crisis is worst across the Country. This is not the time for Utsavs, Jumlas and Campaigns. This is the time for concrete actions and effective implementation. It's already too late, wake up !

The only PM who makes event out of Ppl’s miseries.After the success of thali bajao& go corona go,now Modi came up with Tika Utsav,April 11-14 for ppl of India,amid surge in virus& shortages of Vaccine&Modi exported 6cr doses to 84countries. Is this a Joke? #मोदी_नंग_किसान_तंग pic.twitter.com/VgbRVqp2pZ