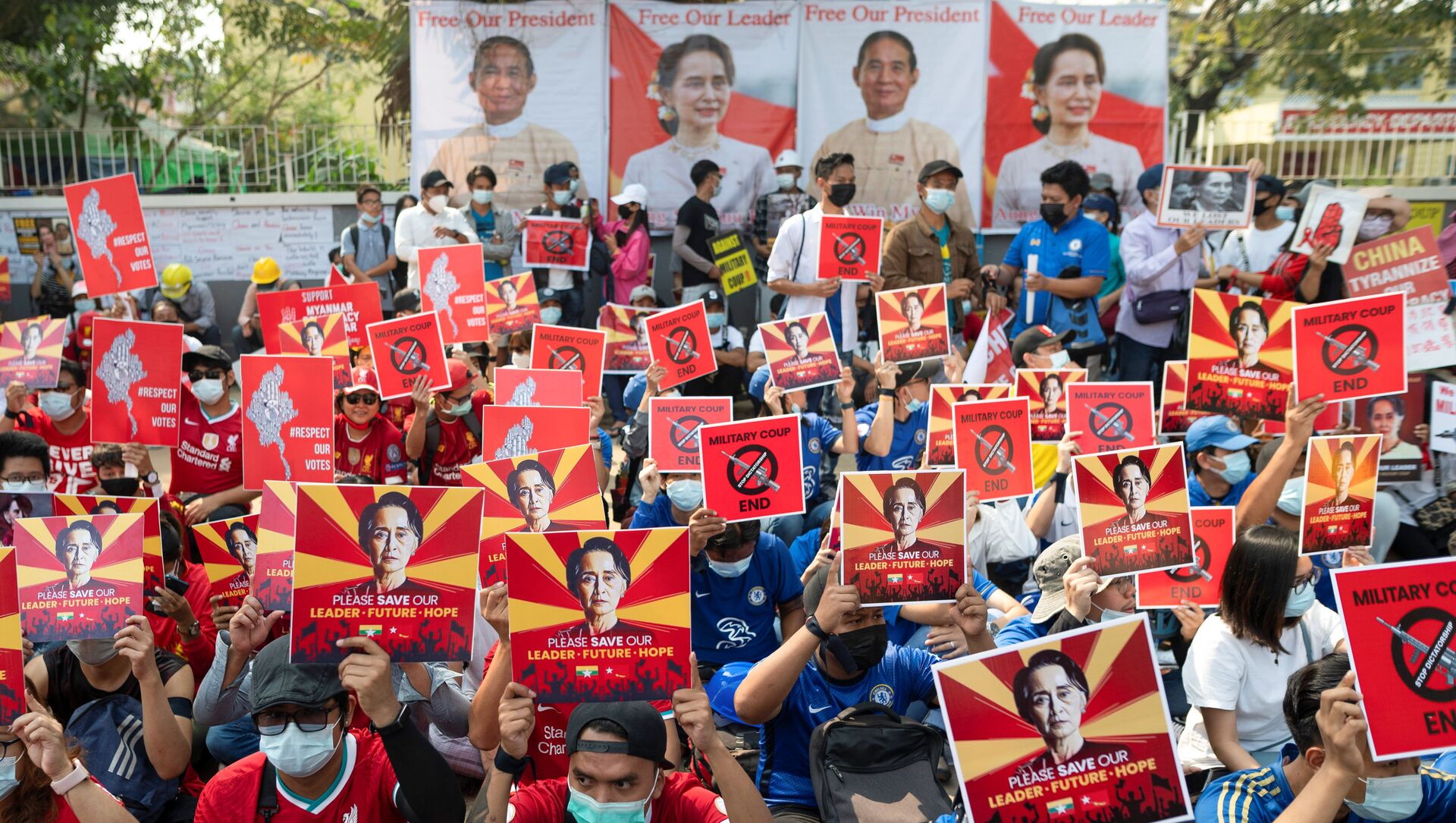 Dhairya Maheshwari
All materials
While India on paper has backed the stand of its "Quad" allies by urging a return to democracy in Myanmar, its actions on the ground have indicated otherwise. Not only has New Delhi recently started deportation proceedings against more than 150 Rohingya refugees, it is also sending back those who are fleeing the military crackdown in Myanmar.

Backing the positions of the US, Australia, and Japan in the ongoing political crisis in Myanmar "doesn't serve the national and strategic interests" of India, a close neighbour sharing land and maritime borders with the ASEAN (Association of Southeast Asian Nations) country, India's former envoy to Yangon Preet Malik has told Sputnik.

In response to the military coup on 1 February in Myanmar, the US Treasury Department imposed sanctions on Air Force Commander-in-Chief General Maung Maung Kyaw and Lieutenant General Moe Myint Tun, the commander of one of the military's special operations bureaus.

The two military generals are accused of being involved in toppling the democratically-elected government of Aung San Suu Kyi last month. Australia, another development partner, has also condemned the coup as well as military crackdown on anti-junta protesters. While Canberra has so far not imposed any economic sanctions on Myanmar, it has suspended its aid programme.

Japan has also been issuing particularly strong statements against the coup in Myanmar too, with prominent publication Asahi Shimbun reporting that Prime Minister Yoshihide Suga's cabinet was considering the suspension of an aid package to Yangon for the "foreseeable future".

"In the case of India, it has issued only pro-forma statements on the Myanmar situation, asking for rule of law to be followed and the democratic transition to be restored", says Malik.

"However, India's Ministry of Home Affairs' recent directives, be it initiating deportation proceedings against Rohingya refugees this month, or pushing back Myanmar civilians and police deserters fleeing violence, shows that New Delhi realises the importance of keeping the military generals happy", reckons Malik.

The more than 300 civilians and police officers from Myanmar, who crossed over the border into the Indian state of Mizoram to flee the military crackdown, have been asked to return to their country by Indian authorities, a matter also raised by K Vanlalvena, an Indian MP from the regional outfit Mizo National Front (MNF).

Earlier this month, Indian authorities also detained more than 150 Rohingya refugees who had been living in Jammu and Kashmir, reportedly accusing them of being in the country "illegally" and starting the process to deport them back to Myanmar.

Malik points out the "mild nature' of the statement put out by the Quad summit on Myanmar, which he says was "different" from bilateral statements and punitive actions against the Buddhist majority nation by the US and Australia.

"I am sure Prime Minister Narendra Modi would have made this point clear to his Quad counterparts during their call last week", reckons Malik, as he refers to the first-ever leadership level virtual summit between Australia, India, Japan, and the US, an informal security dialogue known as the "Quad".

"The leaders felt given the strong democratic credentials of each of the four members, it was important to work towards the restoration of democracy in the country", said Shringla, adding that Modi "attaches" importance to democracy, peace, and stability in their neighbour.

Malik expressed confidence that New Delhi had shared its concerns about the "rising influence" of China in Myanmar, more so because of Beijing's refusal to recognise the political events in the country as "coup".

"India needs Myanmar to address its security problems in the northeast, since many of the insurgents are known to find [a] haven across the border in Myanmar. We can't lose our well-cultivated influence over the military. Unlike the US or Australia, India shares a border with Myanmar", notes Malik.

The ex-diplomat suggests that New Delhi has always recognised the centrality of Myanmar's military to the country's government, even when Suu Kyi was counsellor, when referring to the visit last year by the Indian foreign secretary and Chief of Army Staff (COAS) General Manoj Mukun Naravane to Myanmar.

Naravane has been particularly appreciative of the role of the Myanmar military in "curbing insurgency" in northeastern India.