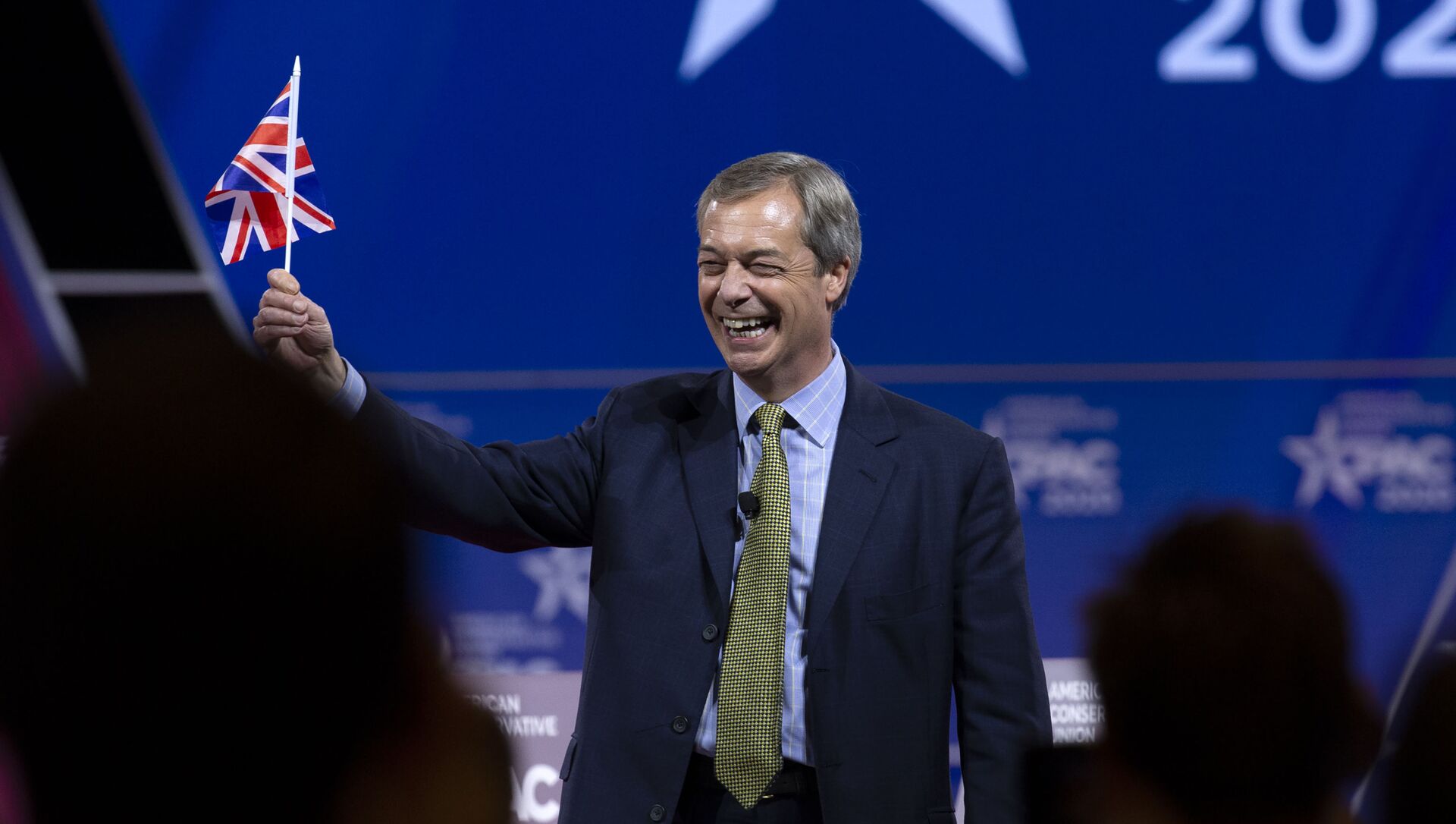 © AP Photo / Jose Luis Magana
Subscribe
BRUSSELS (Sputnik), Luc Rivet - UK politician Nigel Farage's withdrawal from politics will not diminish his influence in the United Kingdom, given his success in pursuing Brexit and demonstrating that the will of a sovereign country outweighs the ambitions of supranational blocs, European politicians who know him tell Sputnik.

Farage announced this past Saturday that he was stepping away from politics. The former UK Independence Party (UKIP) leader's career has spanned 30 years and more recently was centered around getting the United Kingdom to leave the European Union.

In January 2020, Farage and other pro-Brexit members of the European Parliament left the EU legislature after a resounding victory, heads high. Since then, Brexit has become reality, under the conservative government of UK Prime Minister Boris Johnson, supported by a landslide victory in the last general election, whose main theme was Brexit.

"The Brexit referendum in Great Britain in 2016 was his personal success. Brexit was his idea and more than 52% of the Brits went for it despite the opposition of the British Establishment and of all the Left and extreme-Left. Even if Nigel Farage is not an active politician anymore, his influence will remain huge in the UK, through social media. Good luck to him," Aldo Carcaci, a former member of the Belgian parliament for the People's Party, told Sputnik.

Carcaci added that, though news outlets regard Farage as a populist, his position reflected the stance of UK citizens who did not trust EU leadership and wanted to decide national destiny on their own.

"The reality is very different. Populism is carried by people sincerely attached to real democratic expression and not biased on 'societal' subjects and sovereignty which are the basis of all political life. Populism within our sick democracies, is a healthy reaction to the innate mistrust of the ruling elites for direct democracy and the will of the leaders to control without interference the elements of language and thought on central themes such as national sovereignty," Carcaci said.

FARAGE PROVED THAT A SOVEREIGN STATE CAN STAND FOR ITS INTERESTS

Francis Cole, an ex-civil servant at the European Commission, said that the ex-UKIP leader managed to prove that a sovereign country is able not to yield to the pressure of the EU.

"Nigel has achieved what he set out to do … Brexit has happened. It is a success, which is hidden by the pandemic and the efforts that need to be made to fight the virus. But Britain has shown that a sovereign country is much more efficient than the bloated administration in Brussels," Cole stated to Sputnik.

Cole noted that Farage chose the right moment to pursue Brexit in 2016, when the EU faced a huge wave of immigration from the Middle East and Africa, demonstrating that membership in the bloc might harm UK national interests.

"The Brexit referendum was also a success because it came in 2016 at a critical moment in the wave of illegal immigration from the Middle East and Africa that Europe had to suffer. The impotence of Brussels, the dominance of the leftist ideas, proclaiming it a must for Europe to welcome the misery of the whole planet, the jungle of Calais, etc… certainly helped the Brexit camp to win the referendum," Cole opined.

The ex-European Commission officer offered that the UK referendum on withdrawal from the EU was an exception, and Brussels would not allow any similar vote to happen, as the bloc leadership understood that its population did not approve of its policies.

"The Brussels nomenklatura is very much afraid of the referendum, a really democratic tool. They are ready to let the people decide on the change of hour in winter or not, but certainly not on immigration. They know too well that their policies would be disavowed by a serious majority of the European citizens. Europe is not a democracy! You can be sure there will be no more significant referendum in the European Union. They are scared of their own citizens. Isn't that leading to a soft dictatorship? Be sure Farage will denounce it in the future, on social media where he will remain very active," Cole asserted.

From 2019-2020, Farage headed the Brexit party which then became the Reform UK party. Until the UK left the EU in January 2020, the former commodities trader was a member of the European Parliament, where he co-chaired a euroskeptic group, Europe of Freedom and Direct Democracy.