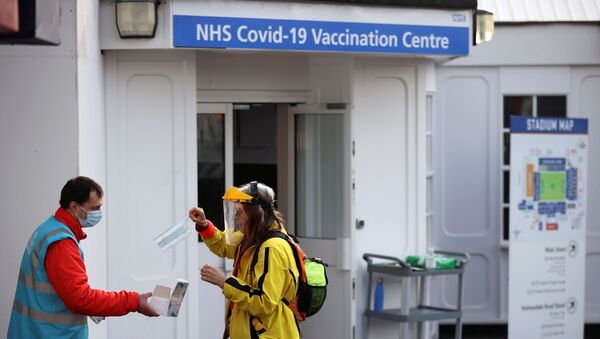 Subscribe
The global death toll from the coronavirus pandemic is now over 2.46 million, while the number of infected has surpassed 111 million cases worldwide, according to Johns Hopkins University.

The US currently tops the list of the worst-hit countries, with around 28.1 million infected and over 498,000 coronavirus-linked deaths. India occupies second place, with almost 11 million cases and over 156,000 deaths, and Brazil rounds out the top three, with more than 10 million cases and 246,500 fatalities. At the same time, Mexico has the third-highest death toll in the world, surpassing India with 178,000 fatalities, while the overall number of cases in the country is around 2 million.

'We will seek to set out tomorrow an indicative order of priority and the likely phasing of firstly the gradual lifting of the current lockdown restrictions and then in due course, a return to the geographic levels system when we would decide whether all or parts of the country may move out of Level 4 and into Level 3, and of course that's the part where more parts of the economy will start to open up. This will be a cautious way forward because it's really important that as we come out of this lockdown, we do so sustainably', Sturgeon said at a briefing.

Iran has formally authorised the emergency use and import of the coronavirus vaccine developed by the Chinese Sinopharm pharmaceutical company, Iranian Health Ministry spokesman Kianush Jahanpur said on Monday.

"The Food and Drug Administration [FDA] has issued an authorisation for the import and emergency use of the BBIBP-CorV vaccine manufactured by the Chinese Sinopharm company", Jahanpur wrote on Twitter.

In early February, Iran embarked on the coronavirus immunisation campaign with the rollout of the Russian-made Sputnik V vaccine. Additionally, the country reportedly greenlighted the vaccines by the UR-Swedish AstraZeneca company and India's Bharat.

The Middle Eastern country is also developing several domestic vaccines against COVID-19, including one jointly with Cuba.

Issuance of Conditional Emergency Import & Use Authorization of BBIBP-corV Vaccine Made by Sinoharm (China) by the Iran Food and Drug Administration(IFDA) pic.twitter.com/cFRv57ca4b

The British variant, also known as B117, now accounts for almost a quarter of new coronavirus cases in Germany, a government spokesman said after a cabinet meeting on Monday.

"The share of more dangerous and clearly more contagious mutations is on the rise. B117 accounts for 20-25 percent of new cases", Steffen Seibert told reporters at a news briefing.

He said Germany and France would hold consultations on how to limit the spread of viral strains, which circulate more freely in border areas.

Germany has reported a pickup in new cases during the past four days, despite a stricter lockdown. The Robert Koch Institute for infectious diseases confirmed 4,369 new infections and 62 further deaths on Monday.

President Putin Says Russia and Other Countries Should Join Efforts in Vaccine Production
12:22 GMT 22.02.2021
Most People in UK Do Not Trust Johnson Can Take England Out of COVID-19 Lockdown – Poll

According to a preliminary study, the Pfizer-BioNtech and Oxford-AstraZeneca vaccines help to prevent severe cases of infections.

The results of the research suggested that by the fourth week after the initial dose, the Pfizer and AstraZeneca jabs were found to reduce the risk of hospitalisation by up to 85% and 94% respectively.

"These results are very encouraging and have given us great reasons to be optimistic for the future", said Aziz Sheikh, a professor at the University of Edinburgh’s Usher Institute who co-led the study.

"Suffice to say the evidence looks good", Under-Secretary of State for COVID-19 Vaccine Deployment Nadhim Zahawi told Sky News, said when answering a question about the possibility of vaccines cutting the virus’ transmission. "We wouldn't be in this place this morning to be able to say that we're going to reopen schools on 8 March, and ... as school holidays begin on 29 March, we will look at the rule of six and two families being (able) to see each other outdoors ... if we're not confident that actually the vaccine programme is beginning to really bear fruit".

MOSCOW (Sputnik) - According to CNN Philippines, it took a long time for the FDA to approve the use of the Sinovac vaccine because the Chinese company failed to provide complete data on the third phase of clinical trials. The FDA's head stressed that the Sinovac vaccine was not the best option for health workers due to its 50.4 percent efficacy in late stage trials and recommended age range from 18-59.

"The trial in Brazil conducted on healthcare workers treating COVID-19 hospitals showed that it was 50.4% effective. This is better than no vaccine, but our recommendation and the recommendation of experts is that this is not the best vaccine for them", Domingo said as quoted by CNN Philippines.