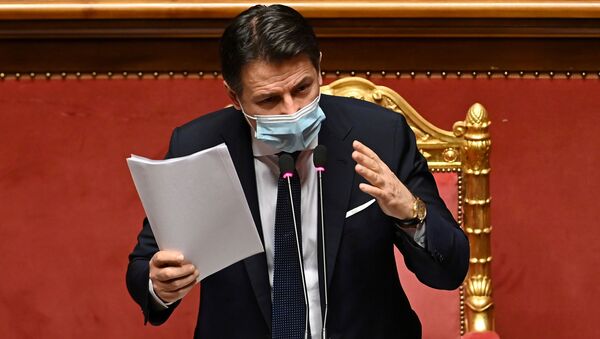 Lilia Dergacheva
All materialsWrite to the author
Italian President Sergio Mattarella is currently due to start consultations with the country’s political parties to resolve the government crisis.

Italian Prime Minister Giuseppe Conte has handed in a formal resignation letter following massive criticism of his handling of the coronavirus pandemic. The news about Conte's decision was confirmed by the president's office on Tuesday, which said in a statement that the President had not immediately accepted it.

"The President of the Republic is reserving his decision and has asked the government to stay in office for the management of ordinary affairs”, it said.

The move means that the task to form a stronger government will now fall to a high-ranking official other than Conte, and new elections can be held, two years ahead of schedule.

The statement added that consultations with the leaders of Italy's major political parties would kick off on Wednesday afternoon.

Mattarella may invite the sitting PM to attempt to build a new governing majority, for the government's initiatives to successfully pass. If Conte receives the mandate, he will likely look for a broader coalition and add five more senators to the fold, to receive a majority in parliament.

Italian Senate Gives Confidence to Conte Government With 156 Votes in Favor, 140 Against

Earlier on Tuesday, Conte confirmed to his cabinet that he would attempt to tender his resignation, days after the politician and university professor, who has of late presided over a centre-left coalition, survived a vote of confidence in the lower house of parliament, the Chamber of Deputies.

He then won a Senate vote, but failed to secure an absolute majority.

The lack thereof was seen as a threat to government action, especially during the coronavirus health crisis, bringing the country to the brink of a massive politial crunch.

The confidence vote came after former PM Matteo Renzi withdrew his liberal party Italia Viva from the ruling coalition and said he would only return provided Mr Conte accepted a string of demands.

In particular, Renzi opposes Mr Conte's plans for splashing out €209 billion in overall EU recovery funds - a hefty portion of a €750 billion EU rescue fund - for the COVID crisis.

Renzi insists EU funds should be invested in promising sectors like digital and green technologies, and he does not want technocrats – like Conte – deciding what to earmark funds for.

The anti-establishment Five Star Movement (M5S) has said it will "remain at Conte's side", having previously co-existed as part of the coalition with the right-wing League before the latter’s head Matteo Salvini pulled out after a failed bid to call elections.