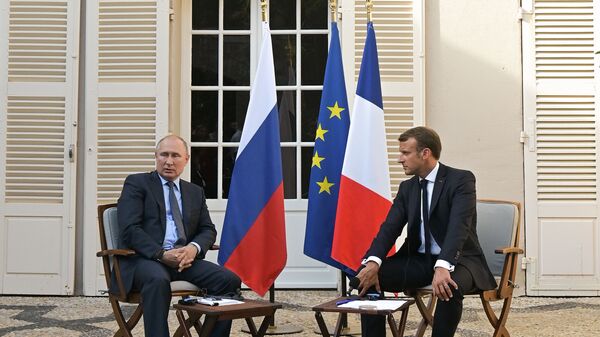 The Kremlin is unaware of the article in the French business magazine Challenges that provides controversial details of the November 7 phone talks between Russian President Vladimir Putin and his French counterpart, Emmanuel Macron, presidential spokesman Dmitry Peskov told Sputnik on Thursday.

MOSCOW, (Sputnik) - On November 12, the Paris-based weekly magazine, citing a diplomatic source, claimed that Putin had asked Macron for France’s help in the production of the COVID-19 vaccine.

"No. It was not brought to our attention," Peskov said when asked to comment on the French media report.

The most recent phone talks between the two leaders took place on November 16. Putin and Macron discussed the developments in the Nagorno-Karabakh region.

Prior to that, the Russian and French presidents, indeed, held the phone talks on November 7. However, the sides once again discussed the situation in Karabakh, as well as in eastern Ukraine and Libya. They also tackled security issues, including terrorist challenges in Europe, and, for a fact, expressed their interest in deepening the two countries' cooperation on combating the coronavirus pandemic.

Russia is currently developing three COVID-19 vaccines, with two of them proven to be effective. The world's first registered vaccine against the coronavirus, Russia's Sputnik V, is going through phase 3 trials in Russia, as well as in Belarus, the United Arab Emirates, India, and Brazil. Sputnik V is 92 percent effective, based on data from the first 16,000 volunteers who have received both shots of the two-dose vaccine.