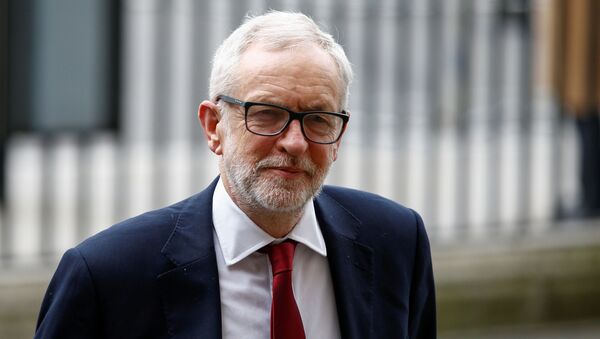 Tommy Sheridan
All materials
The other day a thoroughly decent and honest man suffered a grave injustice. A man who has a peerless record in opposing racism and anti-Semitism was suspended by the political party he has been a member of for over fifty years, has represented it in the British Parliament since 1983 and was its leader from 2015-20.

Irony died in Britain yesterday when Jeremy Corbyn was suspended by the Labour Party with the consent and probable collusion of the man who succeeded him as leader, Sir Keir Starmer.

We now have a Tory leader in 10 Downing Street who is famed for his racist views including referring to black Africans as “piccaninnies” with “watermelon smiles”.

A racist Prime Minister nostalgic for the days of slavery and brutal exploitation and ownership of black people was elected by the people of England in preference to a man whose whole life has been dedicated to fighting racism and injustice.

Corbyn Was Betrayed by His Own Party Bureaucracy in 2017

Jeremy Corbyn would have won the 2017 General Election if his campaign had not been sabotaged from within by Labour opponents. They hated him more than the Tories and refused to accept the democratic will of the Labour Party masses who elected Corbyn leader, not once but twice with a bigger majority the second time round in 2016. He led a remarkable 2017 election campaign which inspired millions and confounded all the opinion polls and political pundits as he came within a whisker of winning. He smashed the Tory majority and rocked the British Establishment. A genuine socialist was almost elected to lead the UK. Millionaires and billionaires were petrified that they would be forced to pay their taxes and public services would no longer be up for sale. Corbyn would have won if staff at the heart of the Labour Party had not actively undermined him.

Paid Labour Party staff expressing disgust for the elected leader of their party and hoping for a bad election result and undermining the effectiveness of the campaign wherever possible is what the right wing did with gusto. And after the close call of the 2017 general election the powerful and rich who make up the British Establishment and mainstream media declared war on Corbyn from every angle but specifically colluded to weaponise the scourge of anti-Semitism and throw every slur and empty accusation against Corbyn that was possible to muster.

After 2017 Close-Call Anti-Semitism Was Weaponised Against Corbyn

An incredible narrative was created whereby a man that had done more in his life to confront and combat racism and anti-Semitism than anyone in British politics was cast as an anti-Semite. It was bizarre, ridiculous, and obscenely unfair and inaccurate but it was effective in creating a wholly false perception. An inordinate number of Labour anti-Semitism stories, headlines and even documentaries were produced and by 2018 polls of Jewish voters indicated an incredulous number believed the Labour Party was anti-Semitic while the problem in the Tories and Lib-Dems was perceived to be minor.

Jeremy Corbyn attracted hundreds of thousands of new members to the Labour Party and transformed it into the biggest membership party in Europe with well over 500,000 signed up to his brand of socialism. The number of party members ever subjected to accusations of anti-Semitic behaviour never surpassed more than 300, so the anti-Semitic ‘problem’ in Labour amounted to 0.1% of its membership at most but the coordinated media led campaign aided and abetted by Labour right wing MPs created a deeply warped and distorted picture that almost 62% of party members were anti-Semitic.

This was the result of a well-coordinated media campaign led by the BBC to traduce the character of Corbyn and the Labour Party under him.

Feeding from the false narrative and whipped up hysteria created by the media the Equality and Human Rights Commission (ECHR) decided to launch a formal investigation into claims of anti-Semitism within Labour to establish if they had breached the Equality Act 2010 and were guilty of acting unlawfully in relation to anti-Semitic actions. This decision was taken in May 2019 amid the Brexit crisis and talk of an early general election. The fact the ECHR acted on the basis of complaints from vehemently anti-Corbyn organisations indicates just how loaded the dice was from the outset.

All anti-Semitic behaviour and opinions should be condemned and confronted unreservedly. Of that there should be no doubt or debate. But the accusations of anti-Semitism against the Labour Party have been overstated and used politically to undermine Labour and Corbyn. Anti-Semitism is a problem in society as a whole. An ugly and repulsive problem. But to suggest Labour has a bigger problem than other parties or that Jeremy Corbyn is an anti-Semite is patent nonsense and lies.

Unlike the Corbyn detractors, Labour’s 2020 ‘No Place For Antisemitism’ Report provides hard facts refuting media and ECHR allegations that Labour under Corbyn did not address anti-Semitism complaints.

Once you have read the facts contained in this Report and considered that the lengthy ECHR Report which took almost 18 months to compile concludes that Labour is guilty of “unlawful acts of indirect discrimination and harassment for which the Labour Party is responsible” based on the conduct of TWO Labour Party members, Ken Livingston and a Councillor called Pam Bromley, you can reasonably conclude that when Corbyn said the allegations of anti-Semitism against Labour were “overstated” he was stating a fact.

Corbyn was a clear and present danger to the rich and powerful British Establishment and his sympathy with the Palestinian people and willingness to call out Israel’s human rights abuses made him dangerous on an international plain also. America and Israel could not tolerate a pro-Palestinian British Prime Minister. The anti-Semitism campaign was a conscious and dishonest scheme to undermine his electoral credibility and the BBC played a blinder in promoting the lie at every available opportunity.

The suspension of Jeremy Corbyn from Labour is an attack on him and every single socialist still in that party. Jeremy is now suffering the consequences of being popular on the one hand but being far too pliable on the other. The day Jeremy stood back and allowed socialists like Chris Williamson be suspended was the day he succumbed to the right-wing bullies within the Labour Party hierarchy. Chris was a loyal lieutenant of Corbyn. A very capable and popular crusader for socialism. When the right wing went after him with the anti-Semitism slur Jeremy should have resisted and stood with Chris. Instead he sought to avoid an internal battle and that was his ultimate undoing. Jeremy had the backing of the members but not the comfortable and right-wing bureaucracy who used their influence to stifle Corbyn and undermine his 2017 election campaign.

The new Labour leader Sir Keir Starmer is determined to turn the party back into a Tory second eleven like in the red Tory Tony Blair days.

The challenge to other socialist Labour MPs and the trade union leaders who support socialist policies which will actually improve the lives of their members is clear. If you can’t fight for the former leader of your party who raised the hopes of millions and came so close in 2017 to winning, then you are not worthy of the description of socialist. The time has come for a party of workers that promotes socialism with guile, enthusiasm, and pride. Instead of funding Starmer’s Tory Party Mark II the trade union movement should fund a real socialist party committed to changing the lives of millions for the better.

The suspension of Corbyn must be the crossing of the Rubicon for the socialist and trade union movement. Labour is already irrelevant in Scotland. It will become irrelevant in England as well soon. The time for a new force backed with trade union organisation and resources is now.