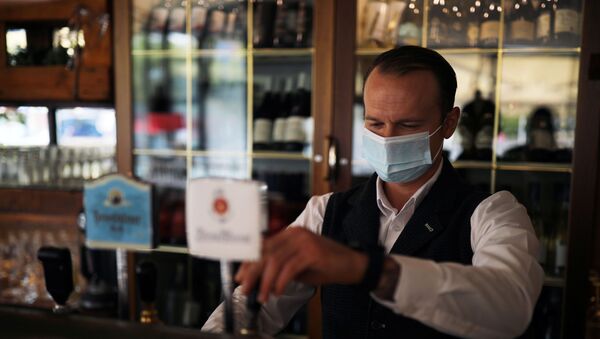 Numerous nations around the world have re-imposed COVID-related restrictions, including mandatory face covering, quarantines, bans on mass events, and curfews in order to curb infection rates as they are facing a second wave of the pandemic.

The pandemic continues to spread across the world, reaching 41,600,000 cases globally, according to Johns Hopkins University, with the highest number of infected in the US (8.4 million cases, 223,000 deaths). India is second in the overall number of cases (7.7 million), while Brazil has the second-highest death toll (almost 166,000).

MOSCOW (Sputnik) – Germany has confirmed 14,714 new COVID-19 cases over the past 24 hours marking the largest daily increase since the start of the outbreak, with the total count reaching 418,005, the Robert Koch Institute said on Saturday.

The death toll has grown by 49 to 10,003 people within the same period of time. More than 314,000 people have recovered since the start of the outbreak.

The Latin American country introduced restrictions amid the coronavirus pandemic on 20 March.

"We will prolong the current restrictions for 14 days more," the president said on late Friday.

Fernandez added that the number of new cases in the capital of Buenos Aires was decreasing, but the increase in the number of infected people was still very high.

MOSCOW (Sputnik) – Moscow has registered 63 deaths of patients infected with COVID-19 over the past 24 hours, bringing the Russian capital's death toll to 6,312, the city's coronavirus response center said in a statement on Friday.

"Another 63 patients, who were diagnosed with pneumonia and tested positive for the coronavirus infection, died in Moscow," the center said.

In the previous day, 62 people infected with the coronavirus died in Moscow.

"We will be accessing the effectiveness of the made decisions ... At least until the beginning of December, everything that was announced by the government will remain in place. These measures — I can say this to your for sure — will not be reduced and they may even be reinforced if we find them not effective enough," Macron said during a press conference.

The president argued that it would not be possible to get rid of the coronavirus "by chance" or due to "herd immunity."

Macron also suggested, citing scientific data, that the coronavirus will remain something that the society will have to deal with "until summer in the best-case scenario."

France has been hit by a second wave of the coronavirus epidemic, which has been regaining pace since July. The country has registered over 1 million coronavirus cases since the beginning of the pandemic and has been among the worst-hit nations. On Thursday, the authorities introduced a curfew in 54 departments across France, affecting a total of 46 million people.

France has registered over a million cases of coronavirus since the global pandemic broke out in March, with more than 40,000 new infections reported in the last 24 hours, French health services said Friday.

A total of 42,032 cases of the novel virus were reported on Friday, 410 more than the day before.

Whole parts of Britain anew headed into lockdowns on Friday, as the country's four home nations adopt various criteria in their attempts to stem the raging novel coronavirus.

Around 3.1 million people in Wales saw the most severe restrictions imposed, after the local government ordered a 17-day "firebreaker" lockdown forcing people to stay at home from 6:00 pm (1700 GMT).

The US Food and Drug Administration (FDA) has approved the antiviral drug remdesivir as the first COVID-19 treatment without having taken into consideration the results of the World Health Organization's (WHO) Solidarity Trial, Soumya Swaminathan, the WHO's chief scientist, said on Friday.

The US biopharmaceutical company, Gilead Sciences, said on Thursday that the FDA had approved remdesivir for treatment of COVID-19 patients who require hospitalization while allowing emergency use of the drug for babies.

"What we understand from the FDA decision yesterday, it was based on data submitted to them from Gilead, which did not include the Solidarity Trial results. We have submitted the Solidarity Trial results to Gilead. They first saw the results on September 23 and then saw the full manuscript on September 28. So they did have the results, even before they were made public ... We gave it to them 10 days in advance, so it appears that the solidarity results were not considered, were not provided to the FDA," Swaminathan said.

The chief scientist noted that the WHO-led Solidarity Trial, which studied the effects of using remdesivir and three other drugs to treat COVID-19, was the largest trial in the world.

"One of the criticisms that we've seen is that it was not a placebo-controlled trial and that it was not double-blind ... we believe that our trial is still very robust because we looked at endpoints, like mortality, like deaths. It's not a soft endpoint," Swaminathan said.

Remdesivir, which is produced by Gilead Sciences under the brand name Veklury, was initially developed to treat Ebola and has received partial approval for use in treating COVID-19 patients in the United States and the European Union.

Following US President Donald Trump's positive test for COVID-19, medical professionals said that he would undergo a five-day course of remdesivir. Since then, the president has said that he had achieved immunity from the disease and is in good health.

France has no at this stage to reduce curfews aimed at preventing the virus spreading, and the said measure could even be extended, President Francois Macron noted while speaking during a visit to a hospital in Pointoise, near Paris.

"When I listen to scientists I see that projections are for at best until next Summer," he said, adding it was too early to say if France was headed towards new full or at least partial lockdowns.

The local government in Wallonia, which is among the hardest-hit parts of the country, has told people to stay at home from 10pm to 6am and made remote working mandatory for students until 19 November.

Belgium, which has Europe's second highest infection rate per capita, had already closed cafes, and other eateries, and imposed a night curfew. New infections hit a peak of 10,500 on Thursday.

Soumya Swaminathan, the World Health Organization's (WHO) chief scientist, said during a virtual briefing on Friday that "a couple more" COVID-19 vaccine candidates likely to move from phase 2 to phase 3 trials in the next month or two.

WHO spokeswoman Fadela Chaib told Sputnik on Tuesday that 46 coronavirus vaccine candidates were currently at the stage of clinical trials, of which 11 were already in phase 3.

Another 20,530 people  have tested positive for COVID-19 across Britain, bringing the total number of coronavirus cases in the country to 830,998, according to official figures released Friday.

The coronavirus-related deaths in Britain rose by 224 to 44,571, the data showed.

Many European cities may run out of available intensive care units (ICUs) as the number of coronavirus patients needing intensive care is on the rise, Maria Van Kerkhove, the head of the emerging diseases unit of the World Health Organisation (WHO), said on Friday.

"And that's a worrying situation as we are in October, we're in the autumn in the Northern Hemisphere, the influenza season is just about to begin and so the demand for testing for people with respiratory diseases will increase, the demand for hospital needs for people who are sick will increase. And so we're in a worrying situation. In fact, over in the last 24 hours we've had almost 445,000 cases reported - almost half of those are from Europe," she added.

Spanish Prime Minister Pedro Sanchez asked his compatriots to rein in their social behaviour, warning of the particular severity of the second wave of the coronavirus in his country in a televised address on Friday.

Sanchez spoke to the nation two days after Spain became the first EU country to confirm over a million cases of COVID-19 since the start of the pandemic, with 1,026,281 infections reported on Thursday by the Ministry of Health.

During the most recent week, we estimate there were around 35,200 new #COVID19 infections per day in England https://t.co/j51ieHdaUL pic.twitter.com/4Mfmn4y5sA

The largest COVID-19 increase was identified in Moscow, where 5,478 new positive tests were registered (up from 4,413 yesterday). A total of 710 new cases were recorded in St. Petersburg (up from 697 yesterday) and 472 cases were confirmed in the Moscow Region (up from 462 yesterday).

The organisation has granted permission for conducting the tests to pharmaceutical giant Dr Reddy's Laboratories.

The date and timing of the testing will be determined by the company, the DCGI said.

The vaccine will be tested in the second phase of its clinical trials before moving on to phase 3.

MOSCOW (Sputnik) – Germany has confirmed more than 11,000 new COVID-19 cases for a second day in a row, with the total count reaching 403,291, the Robert Koch Institute said on Friday.

Within the past 24 hours, the country has registered 11,242 new coronavirus cases, only 45 cases less than a day earlier when Germany reported the largest daily rise since the start of the epidemic.