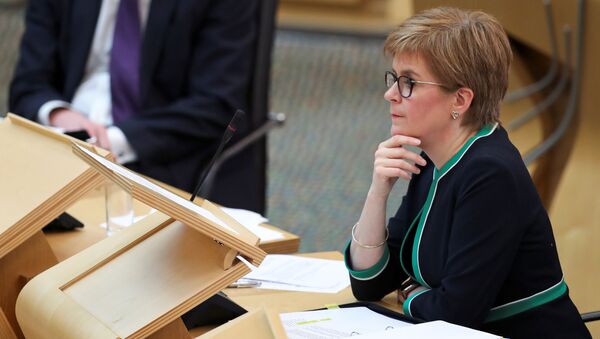 James Baillie
All materialsWrite to the author
Nicola Sturgeon said that she had a 'lingering concern" that allegations about Alex Salmond could materialise at some stage.  She added that one of the worst things she was "confronted with" was the "reality" that her close friend, predecessor and mentor of 30 years was facing serious allegations of sexual misconduct.

Alex Salmond, a former First Minister for Scotland, was accused of 13 sexual assault charges this year but was cleared by a jury in Edinburgh.

Speaking on the Sophy Ridge show on Sky TV, Sturgeon suggested that Salmond had wanted her help in covering up the claims when they first surfaced in 2018.

Sturgeon also accused Salmond of seeking to shift public attention away from his behaviour with claims "there was a big conspiracy against him."

The SNP leader also used the live TV interview to reveal a previously undisclosed exchange of messages with Salmond, which she had been accused of withholding from a Holyrood inquiry into Salmond's alleged actions.

Sturgeon insisted that "at every stage, I've tried to do the right thing and not cover it up" as she rejected claims of "obstruction" by the cross-party committee conducting the inquiry.

Nicola Sturgeon Admits She Will Feel 'Sense of Relief' After Giving Evidence at Alex Salmond Inquiry
After winning his trial earlier this year, Salmond said evidence that had not been heard in court would 'see the light of day'.

Sturgeon Brushes off Accusations of Conspiring Against

In pre-trial hearings, his lawyer had lobbied judges for the right to present evidence about an alleged plot against him. This involved claims that key Scottish Government and civil service figures had launched a campaign against Salmond, aimed at exaggerating allegations of sexual misconduct.

Sturgeon rejects any claims of 'conspiring' against her predecessor. Speaking to Sophy Ridge she said that she had faced accusations of conspiring against Alex Salmond but also of colluding with him. She said that what some want to present as 'conspiracy' is in actual fact evidence of her refusal to 'collude' or 'cover up'.'

Sturgeon, however, admitted that she was aware of a media inquiry from November 2017 about allegations of sexual misconduct against Salmond – and that he denied it when she spoke to him at the time.

She also said that she had a 'lingering concern" that allegations about Salmond could materialise at some later stage.

Sturgeon added that one of the worst things she was "confronted with" was the "reality" that her close friend, predecessor and mentor of 30 years was facing serious allegations of sexual misconduct.

"I didn't collude with him to make these allegations go away and perhaps that is at the root of why he is as annoyed as he appears to be."

Salmond was the First Minister of Scotland from 2007 to 2014, resigning after a 2014 independence referendum, at which a majority of Scottish voters rejected independence from the United Kingdom. Sturgeon was elected unopposed as SNP leader in November 2014 and appointed as First Minister.