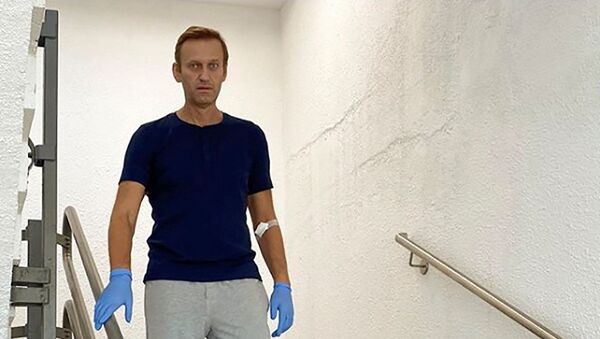 MOSCOW (Sputnik) - Russian opposition figure Alexei Navalny, currently undergoing treatment from suspected poisoning in Germany, released on Saturday a picture of himself walking down the stairs at the hospital with a description of his recovery process.

"Let me tell you how my recovery is progressing. It is already a clear road, albeit not a short one. All the current problems, such as the fact that the phone in my hands is useless like a stone and pouring myself some water turns into a whole attraction, are pretty much nothing," Navalny said in a caption to the photo which he posted on Instagram.

According to the patient, he used to not be able to recognize people or talk not so long ago. Navalny said a doctor was visiting him every morning with a blackboard and asking him to write any word on it and it used to be an unfeasible task for him.

"Now I am a guy whose legs are shaking when he walks up the stairs, but who thinks 'Oh, this is a staircase! People walk up it. Perhaps I should look for an elevator.' But before, I would just stupidly stand and stare at it," Navalny wrote.

He thanked the Charite doctors for "turning [him] from a 'technically alive man' into someone who has every chance to become again the Modern Society's Highest Form of Being — a person who knows how to quickly scroll through Instagram and where to put likes without hesitation."

Navalny fell ill during a domestic flight in Russia on August 20. He was initially treated in the Siberian city of Omsk, where the plane had to urgently land.

Two days later, once the doctors established he was fit for cross-border aerial transportation, the 44-year-old was flown to Charite for further treatment.

Kremlin Spokesman Wonders Why Bottles From Navalny's Hotel Room Flown Out of Russia
It was not until September 2 that the German government claimed Navalny's samples contained traces of a Novichok group substance. According to Berlin, this conclusion was confirmed by labs in France and Sweden. Tests in Russia did not show traces of poison.

On September 7, Navalny awakened from a medically-induced coma and separated from ventilators in the Berlin-based Charite clinic. The first internet appearance he since made was a picture of himself and family from the hospital ward posted earlier this week on the first day that he breathed on his own.