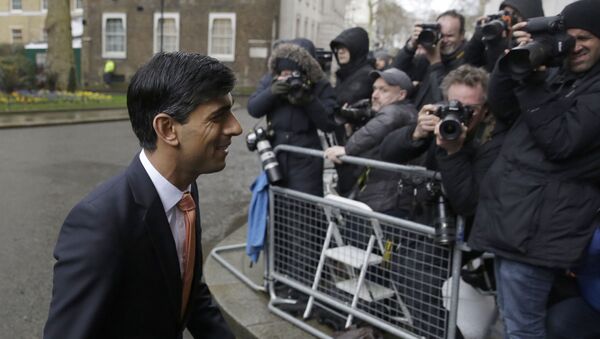 Lilia Dergacheva
All materialsWrite to the author
According to Chancellor of the Exchequer Rishi Sunak, there could be an "anomaly" in the way the triple lock scheme, which keeps pensions at a sustainable level in line with prices and wage growth, could work out in the months to come.

Boris Johnson and Rishi Sunak appear to be at loggerheads over the so-called pension triple lock – a Tory manifesto from 2019, whereby state pensions enjoy annual increases corresponding to either wages and inflation rates, or goes up by 2.5 percent, depending on which of the three figures gives a greater boost to the payment, The Times reported.

Sunak has pointed to what he dubbed "an anomaly" in the pension system that could in theory see the state payments to the elderly population soar as wages are expected to dip in the aftermath of the UK's three-month lockdown before potentially increasing next year.

"Your committee on the triple lock has had evidence from others which has pointed out the anomaly in the way that it might work, depending on the very particular trajectory of earnings declines and the rapid rises over the next few years", the chancellor told an evidence session for the Treasury Select Committee in July, adding though he could not specify "future policy".

He is reportedly weighing the prospects of temporarily suspending the triple lock to boost public finances and help them survive the pandemic fallout.

However, Prime Minister Boris Johnson is believed to be against the motion because "the optics" would not benefit his older electorate who have overwhelmingly backed the Conservative Party in recent years. "The prime minister hates [changing the triple lock] because it was a manifesto pledge", a government source told The Times. "He really doesn't want to do it", the source stressed.

The Office for National Statistics published figures on Friday which showed UK government debt had risen above a record £2 trillion due to a vast uptick in public spending during the pandemic. In response, Sunak commented that the estimates were a "stark reminder" of the need to effectively sustain public finances noting a "difficult decision" might need to be taken with this regard. He implied that should the triple lock not be reformed now, it could prove difficult to raise revenue due the public finances deadlock.

In July, the prime minister stood by a manifesto commitment not to raise the income tax, VAT, or national election before the next election.