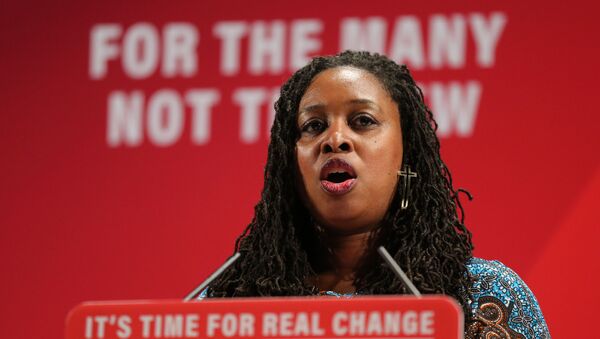 Labour MP Dawn Butler said that she was “shocked” by “conspiracy theories” she saw online over a video she recorded on her phone that showed her and a friend being stopped by police.

The former Shadow Equalities minister claims that she and her friend were victims of "racial profiling" after they were stopped by Metropolitan officers while driving through east London on a Sunday afternoon.

The officers said that they had been stopped as the vehicle they were driving in was linked to an address in North Yorkshire, but later discovered that the registration had been entered incorrectly.

Butler said that she was “angry and annoyed” by the incident, claiming that there is “institutional racism” with police that “needs to be taken out.”

Good morning twitter I see the racist trolls are going crazy with conspiracy theories. Someone who claims to be an ex police officer is challenging me to a debate. No need waste my time as I'm speaking to current police officers. Working together to make the system better.

​The Brent Council MP’s video footage of the incident was met with suspicion and anger online by some social media users claiming that she had doctored the video file.

Susan Hall, leader of the GLA Conservatives, said that she had written a letter to Metropolitan Police Commissioner Cressida Dick, asking for the Body Worn Camera footage to be released.

My letter to Cressida Dick 👇

Police officers shouldn't have to put up with potentially misleading videos of them being shared online while they do their jobs.

The Met should release the Body Worn Camera footage from the Dawn Butler incident so we can see the whole story. pic.twitter.com/rv6v4UjkvP

​There were also allegations that she had lied about the race of her friend who was driving the car, with some accounts claiming that he was white.

So it Now transpires that In fact the Driver of Vehicle that @DawnButlerBrent has been GOBBING off to Media about was in fact a White Person; Dawns Inference was that it was her that was stopped; I would call this a Disgusting Dirty Big Fat Lie with Intent to cause Racial Hatred!

​When asked about this by Sky News, Butler said, "It just made me think of the length that people will go to excuse racism away or discrimination away or injustice away.

"It just shocked me. Why would I flip my camera? I pressed record and I was recording. I turned the camera when I had to record the police officer. There was no flipping of the camera."

“My friend is black and is quite insulted that someone was saying he was trying to… what is that about?” she went on. “I was a passenger, we got stopped, I am black, he is black, he drives a fairly nice car.”

On Monday, a day after the incident occurred, he tweeted that he had reached out to her to discuss the incident and to offer support.

I reached out yesterday to @DawnButlerBrent to discuss the incidence she reported and to offer our support. All allegations of racial profiling must be taken extremely seriously by the Metropolitan police.

​The Metropolitan Police Federation said that they would like to share the footage of the incident recorded by the officers.

“We are aware of video footage that is circulating on social media this evening following the stopping of a car in Hackney,” the federation, which represents rank and file officers, said. “Our colleagues want to be able to share their body worn video of the incident and as a federation we are calling for this to happen.”

000000
Popular comments
That's it, the magic formula to evade ideas confrontation, "Conspiracy Frigging Theory", you just have to utter that magic formula, and you've won the argument without firing a shot, or without any further effort, fantastic. People must realize that those who resort to such coward, and meaningless expressions, have in fact nothing to say, no argument whatsoever, and usually no brains either, Zionism made it popular amongst stupid people who have nothing to say, and cannot sustain a proper logical and civilized debate.

Mclupo
11 August 2020, 06:14 GMT3
000000
So Ms. Butler it was a white woman who was stopped and you obviously staged the incident. And, you are an MP. Certainly there is some crime there you have committed and you should resign immediately. This has truly proven who the racist is - you can tell simply by looking in your mirror.