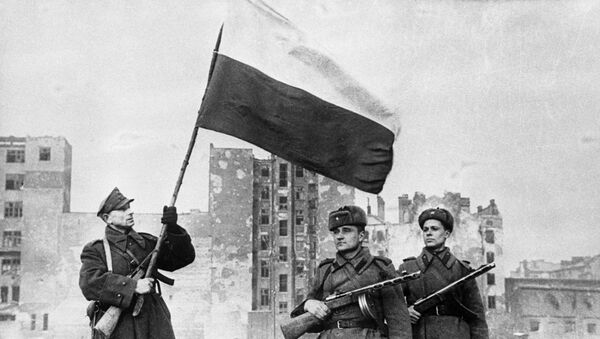 © Sputnik / РИА Новости
/
Go to the photo bank
Subscribe
Russian President Vladimir Putin written an article about the historical, cultural and political aspects of the World War II legacy. Headlined "The Real Lessons of the 75th Anniversary of World War II", it was published on the Kremlin's web site.

Geoffrey Roberts, Emeritus Professor of History at University College Cork and a Member of the Royal Irish Academy, reflects on concerns raised by Mr Putin about attempts made by different countries to rewrite history and diminish the role of the Soviet Union in victory over Nazism.

Sputnik: In his essay titled “The Real Lessons of the 75th anniversary of World War II”  Russian President Vladimir Putin underlined how following the Second World War the leaders of the USSR, US, and the UK laid the "foundations of a world that for 75 years had no global war despite the sharpest contradictions". How would you assess the reliability of this system? How should this be maintained so as not to repeat the mistakes of the past?

Geoffrey Roberts: As President Putin pointed out, the Second World War was followed almost immediately by the Cold War – a highly dangerous conflict that threatened nuclear warfare and resulted in numerous military actions and proxy wars by the great powers. To avoid a third world war in those circumstances was a huge achievement, the result of efforts by political leaders to coexist peacefully, to control their rivalries and to engage in mutual dialogue, negotiation and compromise. An important role in containing the cold war was played by the United Nations, in particular the Security Council and its great power veto mechanism which prevents the organisation from being taken over by any one group of powers. As Putin writes,  this mechanism has helped the UN to endure over many decades. Without it, the organisation would have collapsed long ago. Surprisingly, Putin does not give credit where it is due in relation to the durability of the UN: it was the Soviet Union that insisted on a structure that would encourage the great powers to collaborate within the framework of the United Nations.

Sputnik: Citing the historical role of the Soviet people's contribution to the defeat of Nazism, Putin warned against historical revisionism, observable in the West, particularly when it comes to WWII. Commenting on a resolution by the European Parliament that equally attributes responsibility for starting the war on the USSR and Nazi Germany, Putin related them to "politically-motivated statements that are aimed at provoking scandal and are fraught with threats". In your view, just how dangerous is historical revisionism?

Geoffrey Roberts: The historical revisionism referenced by Putin is part of a political project to isolate Russia and reduce its influence in world affairs. That is what makes it dangerous as opposed to being merely untruthful. When communism is equated with Nazism, when Stalin is said to be as bad as Hitler, when the actions of the Red Army are characterised as barbaric, the message is that Russia is a pariah state led by rogue leaders who threaten global law and order. In truth, it was Stalin and the Red Army that saved European civilisation from Hitler and the Nazis. And in relation to world order, Russia is as indispensable as any of the other great powers.

Sputnik: Putin also recalled that in 1989 the Soviet Union provided a legal and moral assessment of the so-called Molotov–Ribbentrop Pact, denouncing the secret protocols as "an act of personal power" which in no way reflected "the will of the Soviet people who bear no responsibility for this collusion”. How is this Pact seen among historians around the globe and why are we seeing various versions? In the UK, for example?

Geoffrey Roberts: The pact is a controversial topic among historians. Many would accept Putin’s argument - that faced with continuing western appeasement of Hitler, Stalin had no alternative to seeking a deal with the Germans that would keep the USSR out of the war for as long as possible. Others would argue that the Soviets did not try hard enough to forge an anti-fascist coalition with the west and could have shown more flexibility in the triple alliance negotiations with Britain and France in summer 1939. But most would agree with Putin when he says “All the leading countries are to a certain extent responsible for the war’s outbreak. Each of them made fatal mistakes, arrogantly believing that they could outsmart others, secure unilateral advantages for themselves or stay away from the impending world catastrophe.. And this short-sightedness, the refusal to create a collective security cost millions of lives.” 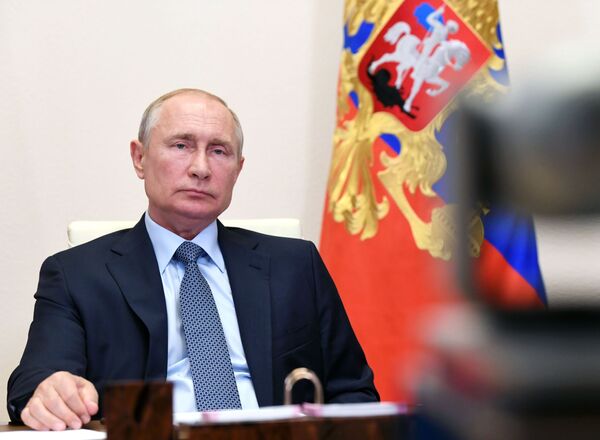 Sputnik: Today in the Western media we see that Mr Putin is being blamed for not being accurate in his assertion about history. In your opinion, how viable are these accusations? How would you assess them from a historical perspective?

Geoffrey Roberts: I have spent many decades researching and writing about the issues discussed by Putin in his article. I have written many books and articles about the Nazi-Soviet Pact, the Second World War and the Cold War. For a politician, Putin is not a bad historian, and a lot more rigorous and reliable than his western counterparts. I would disagree with some of Putin’s factual statements and interpretations but I agree with 80-90% of his article.

Sputnik: “Our colleagues – Mr Xi Jinping, Mr Macron, Mr Trump, and Mr Johnson supported the Russian initiative to hold a meeting of the leaders of the five nuclear states, permanent members of the Security Council”, writes Mr Putin. In your view, can this meeting be as successful in terms of cooperation as say, the Yalta Conference? Can we expect the same level of mutual, if not trust, then understanding to be reached?

Geoffrey Roberts: Churchill, Roosevelt and Stalin’s conference at Yalta was highly successful in creating the framework for postwar collaboration that could have – but for the cold war - benefited not just their own states but peace, security and prosperity of the whole world. Yalta’s success was built on the close personal and working relations between the three leaders that developed during the war. As Putin writes in his article: “Stalin, Roosevelt and Churchill represented countries with different ideologies, state aspirations, interests and cultures, but demonstrated great political will, rose above the contradictions and preferences and put the true interests of peace at the forefront.”

While Putin and Xi seem to have developed good relations that does not apply to their relations with other leaders or among the western leaders themselves. That does not mean the meeting proposed by Putin is not very welcome but it is unlikely to reach the height of cooperation achieved by the grand alliance of Britain, the United States and the Soviet Union from 1941-1945.

000000
Popular comments
No nation suffered as much in WWII as Russia. Even Winston Churchill presented Stalin a special sword he kissed with thanks to the Russians. Even Churchill knew as much as the British suffered through the blitz and daily bombings Russia endured more. Read what happened in Stalingrad and Leningrad.. how the Russians did what they did I'll never know. The horrors and the Cold they endured determined never to capitulate to assure Mother Russia's survival. FROM A GRATEFUL AMERICAN.
LynsIn2day
23 June 2020, 16:23 GMT1
000000
Newsfeed
0
New firstOld first
loader
LIVE
Заголовок открываемого материала
Access to the chat has been blocked for violating the rules . You will be able to participate again through:∞. If you do not agree with the blocking, please use the feedback form
The discussion is closed. You can participate in the discussion within 24 hours after the publication of the article.
To participate in the discussion
log in or register
loader
Chats
Заголовок открываемого материала
Worldwide
InternationalEnglishEnglishMundoEspañolSpanish
Europe
DeutschlandDeutschGermanFranceFrançaisFrenchΕλλάδαΕλληνικάGreekItaliaItalianoItalianČeská republikaČeštinaCzechPolskaPolskiPolishСрбиjаСрпскиSerbianLatvijaLatviešuLatvianLietuvaLietuviųLithuanianMoldovaMoldoveneascăMoldavianБеларусьБеларускiBelarusian
Transcaucasia
ԱրմենիաՀայերենArmenianАҧсныАҧсышәалаAbkhazХуссар ИрыстонИронауОssetianსაქართველოქართულიGeorgianAzərbaycanАzərbaycancaAzerbaijani
Middle East
Sputnik عربيArabicArabicTürkiyeTürkçeTurkishSputnik ایرانPersianPersianSputnik افغانستانDariDari
Central Asia
ҚазақстанҚазақ тіліKazakhКыргызстанКыргызчаKyrgyzOʻzbekistonЎзбекчаUzbekТоҷикистонТоҷикӣTajik
East & Southeast Asia
Việt NamTiếng ViệtVietnamese日本日本語Japanese俄罗斯卫星通讯社中文（简体）Chinese (simplified)俄罗斯卫星通讯社中文（繁体）Chinese (traditional)
South America
BrasilPortuguêsPortuguese
NewsfeedBreaking
04:30 GMTA Sigh That Tells It All: Golden Retriever Wants Attention
04:28 GMTLive Updates: Germany Registers 10,454 New COVID-19 Cases
04:11 GMTFlorida Gov. Orders All State Agencies to Search for Laundrie After Petito's Remains Confirmed
03:43 GMT'Nothing New on That': Bill Gates Brushes Off Question About His ‘Dinners’ With Epstein
03:33 GMTGOP Politicians Stand by US Border Patrol After Claims They 'Whipped' Refugees at Rio Grande River
03:14 GMTPele Cheers Up Fans by Posting Video of Him Riding Exercycle in Hospital
03:07 GMTAxis of Resistance Killed US, Israeli Commanders in Revenge for Soleimani's Assassination - Report
02:56 GMTPolitical Capital & GOP in His ’Grip’: Trump ’Wants Back’ in 2024, Journos Say
01:43 GMTIRGC Chief: Iran No Longer Sees US as Threat - Report
01:18 GMTChinese Covid Vaccines Reach 100 Nations, But WHO Warns Africa Still Short 470 Million Shots in 2021
01:04 GMTAwkward Moment as White House Staff Cuts Off Biden-Johnson Meeting in Mid-Sentence
00:20 GMTVideo: Military Jet Intercepts Small Aircraft Over NYC in the Middle of UN General Assembly
00:19 GMTPark Ranger ‘Implored’ Gabby Petito to Distance Herself From Toxic Relationship With Brian Laundrie
YesterdayVideos: 6.0 Earthquake Strikes Southeastern Australia
YesterdayPro-Reunification Candidate Chang Ya-chung Edges Ahead as Chairman Election in Taiwan’s KMT Nears
YesterdayTexas Governor Vows to Prevent Del Rio Migrant Surge Disaster From Being Replicated
YesterdayUber’s Business Model Faces Threat After Legal Setback Across Europe
YesterdayUS Lawsuit Challenges Alliance of 2 Airlines for Stifling Competition
YesterdayTaliban Say No Al-Qaeda Members Present in Afghanistan
YesterdayJoe Biden Faces Backlash Over Inept UN Speech