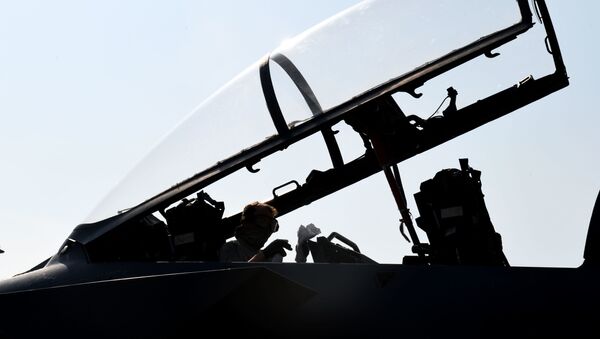 The F-15C Eagle is one of the US Air Force's most modern fighter jets. The plane which crashed was from the 48th Fighter Wing, which is based at RAF Lakenheath in Suffolk.

A rescue operation is under way to find the pilot of a US fighter jet which crashed into the North Sea on Monday, 15 June during a routine training mission.

A major operation is under way off the coast of North Yorkshire after the F-15 C Eagle came down near Flamborough Head, south of Scarborough.

#BREAKING A US Air Force F-15C Eagle plane from RAF Lakenheath, UK had crashed in the North Sea pic.twitter.com/5vtC05Zuwl

3 KC-135s are circling the area of the North Sea around the location of where the F-15 crashed. pic.twitter.com/u5BZEJ4hpi

It has a top speed of 1,875 miles per hour and is powered by two Pratt & Whitney F100-PW-100 turbofan engines, with afterburners.

The US Air Force has had a base at RAF Lakenheath, in the east of England, since 1948.

In 2018 it was reported that the US Air Force was in talks with Boeing about building a replacement for the ageing F-15 Eagle.

​The US Air Force and the RAF carry out regular low flying sorties along the east coast of England and out into the North Sea.