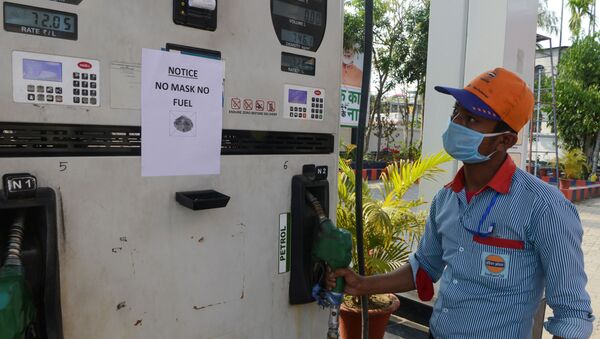 New Delhi (Sputnik): Ever since the global crude oil prices crashed in March, when the Oil Producing and Exporting Countries Plus (OPEC+) failed to agree on production cuts in the wake of the COVID-19 spread as Russia was not in favour of it, India’s principal opposition party Congress has been nudging the Modi government to cut retail prices.

India's largest opposition party Congress has slammed the governing Bharatiya Janata Party (BJP) for high petrol and diesel prices amid the economic difficulties already being faced by people due to the COVID-19 pandemic.

Former Indian Finance Minister and senior Congress parliamentarian P. Chidambaram on Monday hit out at Prime Minister Narendra Modi's government, saying that taxes and fuel costs have been increased, as if the people are not poor while the government is.

Hours after the government raised the retail prices of petrol and diesel, P. Chidambaram said in a tweet, “Fuel selling prices raised twice in two days, following tax hikes two weeks ago. This time to benefit oil companies. Government is poor, it needs more taxes. Oil companies are poor, they need better prices. Only the poor and middle class are not poor, so they will pay”.

Government is poor, it needs more taxes. Oil companies are poor, they need better prices. Only the poor and middle class are not poor, so they will pay.

As the global crude oil prices rebound with the economy now gradually opening up, state-run fuel retailers hiked the prices of both petrol and diesel on Sunday. This is the first hike in retail prices of fuel since 16 March by the central government.

Later, the Indian government also imposed a higher excise duty on both petrol and diesel to take advantage of the cheap global crude oil prices and mop up revenues for itself. Owing to the cheap crude oil prices, there was no impact on the retail prices due to the excise duty hike. In doing so, the Modi government raised $40 billion from the levy without giving any relief to the common man, who was facing economic distress due to the pandemic.

The Congress Party has been raising the issue of the Modi government not passing on the benefits of the low global crude oil prices. It raised this concern when the crude oil prices tanked in the wake of the price war that emerged when Russia and Saudi Arabia could not agree on production cuts, anticipating a disruption in demand owing to the pandemic. Congress has called this a practice of “solo profiteering” by the Modi government.

In March, international crude oil prices declined significantly to $31.13 per barrel from $63.27 per barrel on 6 January.

India imports about 80 percent of its crude oil. In an estimate, a reduction of one dollar in crude oil prices per barrel results in savings of $1.5 billion for India on its import bill. The oil import bill was $112 billion during 2018-19 and between April 2019 and December 2019 India paid an estimated $87.7 billion for imported crude oil.