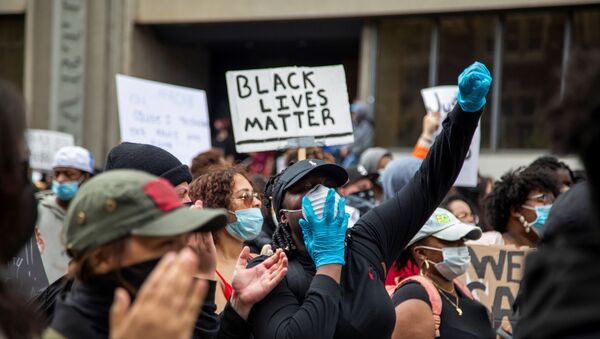 Denis Bolotsky
All materialsWrite to the author
The death of George Floyd, an African American man from Minneapolis, at the hands of the police a week ago has sparked massive protests and riots across the United States, with many cities and states forced to declare a state of emergency, calling in the National Guard to quell the unrest, while POTUS announced the deployment of the US military.

Thousands of Canadians rallied on Sunday and Monday against racism and demanded justice for George Floyd, a Minnesota man, who died last week after Minneapolis police pinned him to the ground, with one of the officers holding a knee to his neck for almost nine minutes until the man became unresponsive.

Just like in the US, where rioting has engulfed over 70 cities across the country, some of the protests turned violent, leading to at least 11 arrests.

According to Cody Payant, a politician from the western province of Saskatchewan who ran for office during the 2019 Federal Election representing the People’s Party of Canada, the demonstrations in both the US and the Great White North were mostly perpetuated by the media.

Sputnik: Earlier this week we saw anti-racism rallies spreading from major US cities to Canada, with protests being held in Toronto, Vancouver, and Montreal. Did this trend affect the Prairie Provinces, and is it likely, in your opinion, that we’re going to see the same type of events in Saskatchewan?

Cody Payant: I don’t see it happening anywhere near to the extent in urban centres like Montreal and Toronto and Vancouver out in Saskatchewan. I think it’s mostly perpetuated by the media. We have tax-funded state media in Canada, so what happens is, I think part of it is Justin Trudeau trying to distract from his own “blackface” controversy. Justin Trudeau and the Liberals, it’s almost like they’re looking for racism, they’re identity politicians, so they always have to fill that quota, they’re always looking for ways to exploit someone’s identity to try to make it into a problem. But overall in Canada, I don’t think we have a problem with racism.

I think that Canada’s biggest problem with racism is with the Liberal Party of Canada and NDP (New Democratic Party) and identity politicians who try to exploit people’s identity, to divide them instead of uniting them. So I actually think that the people of Saskatchewan, people in Alberta – no one cares about skin colour. Justin Trudeau came out with a statement the other day saying that we have a problem with anti-black racism, and I don’t think we do in Canada. I don’t think we have a problem with it. I think the biggest problem is our identity politicians. 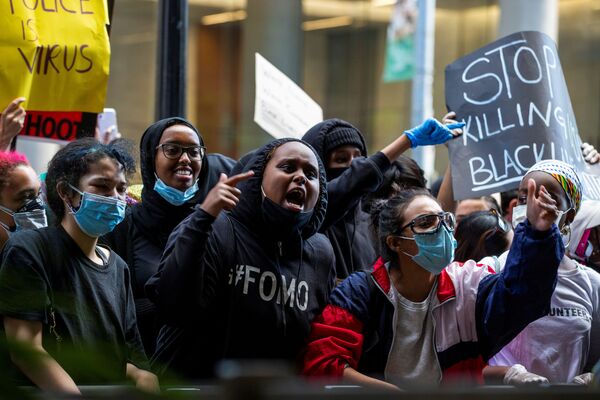 People scream at police outside of Toronto police headquarters as protesters march to highlight the deaths in the U.S. of Ahmaud Arbery, Breonna Taylor and George Floyd, and of Toronto's Regis Korchinski-Paquet, who died after falling from an apartment building while police officers were present, in Toronto, Ontario, Canada May 30, 2020.
© REUTERS / CARLOS OSORIO

I think what we’re seeing is that tax-funded state media, whom the current Liberal government is funding with Canadian taxes - they’re creating their own narrative in Canada in response to something that happened in the United States.

In the United States they definitely have a problem with racism, but I think even in the United States – and I’ll stay out of it because I’m not a US citizen, it’s not really my place to comment on it, but I think even there the media, when they say the words “systemic racism” – they’re trying to make it seem like somehow there is a problem with racism to a greater extent than there is. Who knows, maybe in Canada we have a few policemen who are racist, who hold certain views about things, but I think the media blows it out of proportion.

Sputnik: Canadian media reported on acts of violence following Sunday’s protest in Montreal, with people smashing windows and setting objects on fire. At the same time, we see videos on social media with ordinary citizens in the US holding assault-type rifles, defending their shops and neighbourhoods from looters. Unlike their US neighbours, Canadian residents have been recently stripped off their gun rights by the Trudeau government, with 1,500 models of weapons being outlawed, so it’s hard to imagine that in case of continued street violence, Canadian business owners and home owners will be able to protect their property in the same manner. How is the gun ban being perceived in your province?

Cody Payant: Well, we don’t like it. The whole province is basically against it. The province here is very conservative. We believe in freedom, we believe that people should have rights to own guns because it’s not law-abiding gun owners that are the problem – it’s criminals that are the problem. But the problem is that gun laws and the gun ban by the liberal government – they don’t actually have any positive effect on crime whatsoever, because criminals don’t follow gun laws. So what ends up happening is out here in Saskatchewan and Alberta, where we have a lot of people out in the country, living in rural areas, a lot of these people have guns, and these are law-abiding gun owners. There aren’t people who are causing problems.

It’s criminals who are causing problems. So we had constable of Winnipeg – the capital city of Manitoba, which is the province east of Saskatchewan, we had him last year go in front of a panel, and he had a press conference, and he explained why a gun ban will have no positive effect on crime at all. So what we ended up happening was that we had a crazy psychopath in Nova Scotia, who murdered 22 people and injured 3 others, but before the blood even dried, we had the Liberal government jumping on that and exploiting that tragedy to introduce a gun ban in Canada - they were waiting for this opportunity.

When the mass shooting happened in Christchurch in New Zealand, I don’t think they had enough support in Canada for a gun ban, but then they exploited people’s emotions and they exploited the tragedy in Nova Scotia. And that’s why, I think, they introduced the gun ban. All it’s going to do is make it easier for criminals to commit gun violence against unarmed citizens.

Sputnik: Saskatchewan authorities announced last week that they will be pushing for the appointment of their own candidate as Chief Firearms Officer, as opposed to a federally-appointed figure. What does that mean, and how would it affect gun rights in your province? Do you think Saskatchewan will be able to keep its independent policy on guns?

Cody Payant: I’d like to think that that is the case – if there was a Chief Firearms Officer appointed provincially in Saskatchewan – and it’s the same thing in Alberta, Alberta is also pushing for a provincial Chief of Firearms. I’d like to think that it would have a positive effect, and they would have autonomy on guns legislation, but I don’t think that is the case, just because we have a history in Canada of the federal government just violating provincial jurisdiction.

Overall the federal government – whether it’s the Conservative or Liberal party (we’ve only had two parties governing Canada for 150 years) and they don’t respect the constitution, they don’t respect provincial jurisdiction. So, even if we do, and I think we will have a Chief of Firearms appointed in Saskatchewan, the federal government won’t respect that provincial jurisdiction, and they will just keep pushing whatever gun ban that they had intended to implement nationwide in the first place.

So, at the end of the day, all this gun ban affects, is just leaving citizens of Canada more vulnerable to gun crime, because the criminals are not listening to legislation, and all that happens is law abiding gun owners are following the gun ban, because they obey the law, and then it makes it easier for criminals to target these people, especially in rural areas.

000000
Popular comments
Racism *is* a problem in Canada, just not as much in the open as it is in the U.S. Gun control does stop the majority of gun related crimes. U.S. gun related, mass murder figures are much higher than Canada's. Cody Payant has it entirely wrong. The NDP is entirely opposed to dividing the people of Canada by "identity." I have been a member of the NDP, and the attitude there is to include everybody. Mr Payant is trotting out all the old disproven arguments for a gun culture, and it's getting old and sad. He is a bad example of a Canadian. I am Canadian and living in Canada.
Unclefred
2 June 2020, 13:21 GMT1
000000
This is the same one that tells fiction, deliberate misinformation and bad propaganda about Venezuela. Not a big surprise. As bad media cannot break the bad habits developed during Cold War 1.0...lol