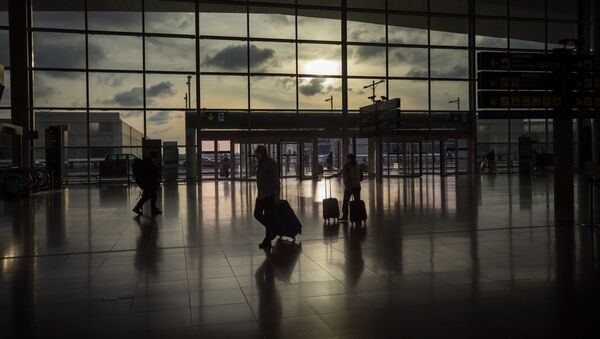 © AP Photo / Emilio Morenatti
Subscribe
International
India
Africa
As both Europe and the UK apparently emerge from the worst of the coronavirus outbreak, how and when to reciprocally open up borders is becoming a point of contention.

EU leaders have responded with frustration to the UK’s plan for a quarantine regime that will require arrivals in the country to self-isolate for 14 days.

UK Home Secretary Priti Patel revealed on Friday that anyone arriving in the UK - including nationals returning from holidays abroad - from June 8 would be required under UK law to stay at home for 14 days or risk being hit with fines of £1,000.

France has responded by saying that it “regretted” the UK’s decision and will impose a “reciprocal measure.” It was initially reported that France and other EU countries could be exempt from any UK quarantine regime, however it was confirmed this week that would not be the case.

Priti Patel Announces 14 Day Quarantine for People Entering UK
A spokesman for France’s Interior Ministry has been widely quoted as saying that, “we take note of the British government’s decision and we regret it. France is ready to put in place a reciprocal measure as soon as the system comes into force on the British side.”

Italy, once Europe’s Coronavirus capital, has also called for the UK to reconsider its position and said that together with the EU it should strike a “coordinated approach” to lifting lockdowns.

Raffaele Trombetta, the Italian Ambassador to the UK seemed to take a jab at Britain’s go it alone approach in an interview with the BBC Radio 4’s Today programme, saying that, “we believe that this pandemic is a global problem so the best thing to do is to tackle it with a coordinated approach.”

Mr Trombetta highlighted Italy’s plan to lift quarantine rules for those arriving from the UK to the EU as of June 3.

“We had 40 million trips from the UK to Italy last year. We know how much they love Italy. We are still open, welcoming them. We have made it clear what we are going to do and it’s important for British people to know that they can come to Italy. We understand that the UK’s new rules will be assessed after three weeks so hopefully there will be an easing of the measures as we are doing in Italy.”

Priti Patel announced the stringent new UK measures during the daily Coronavirus press conference in Downing Street on Friday, May 22.

“We are following the science and introducing public health measures that are supported by SAGE. This will require international arrivals to self-isolate for 14 days – that is the incubation period of the virus so that if people have become infected overseas, we can limit the spread of the virus at home,” Patel said.

“And as we are taking this action, we are taking it at a time when it will be the most effective. Passengers arrivals have been down by 99% compared to the previous year. Now we are past the peak of this virus, we must take steps to guard against imported cases, triggering an insurgence of this deadly disease,” she added.

According to the UK Home Office, travellers will reportedly be required to provide their contact information and officials will carry out checks to ensure that individuals are complying with the new rules. Those in self-isolation will not be permitted to have visitors and should not go out to buy essentials if they are able to rely on others to do so for them. Patel also revealed a list of 39 categories of people who would be exempt from the new rules, including healthcare workers, pilots and those coming from Ireland.

The British government has said that the new measures would be reviewed every three weeks.

“This isolation measure simply does not work unless passengers arriving in international UK airports are detained in airport terminals or hotels for the 14-day period. Once these arriving passengers have travelled on the crowded London Underground, or the Heathrow and Gatwick Express, or buses or taxis to their destination, the subsequent quarantine is pointless,” a Ryanair spokesman has been widely quoted as saying.