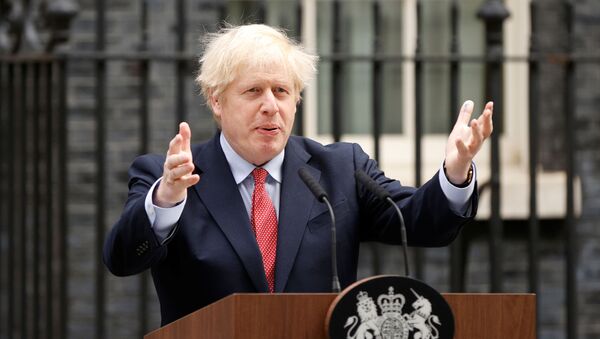 Oleg Burunov
All materialsWrite to the author
Earlier this week, Boris Johnson pledged that the number of daily coronavirus tests will hit 200,000 by the end of May and may go beyond that figure in the future.

Prime Minister Boris Johnson later on Sunday will warn that the UK may soon enter the most dangerous phase of its fight against COVID-19 when announcing in a live TV address a roadmap to lifting the virus lockdown, The Sun reports.

In the address, Johnson will unveil a phase two of the lockdown, urging “maximum caution” over the coronavirus-related risks, which he will say are more serious now than at any stage since the stay-at-home restrictions were introduced seven weeks ago, according to the British newspaper.

The roadmap will reportedly include small rewards for lockdown-hit families, the green light for garden centres to re-open as well as bigger fines for violation of lockdown rules and a 14-day quarantine for those arriving in Britain. 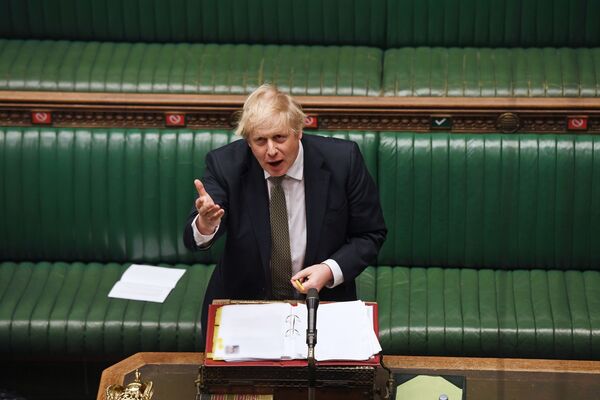 Earlier on Sunday, the UK PM told The Sun that even though the country is past the peak, the government has “to work even harder to get every step right”.

“Mountaineers always say that coming down from the peak is the most dangerous bit. That’s when you’re liable to be overconfident and make mistakes. You have very few options on the climb up — but it’s on the descent you have to make sure you don’t run too fast, lose control, and stumble”, Johnson said.

He added that in his address to the nation he would stress that the UK “must not stumble now”, recalling that he previously promised the country “we would turn the tide within three months”. According to Johnson, he believes that Britain is “definitely on course to do that”.

The remarks came after The Sun quoted an unnamed Downing Street source as saying that the British prime minister would announce the roadmap at a “critical moment”.

“[…] The PM will […] ask for their [the public's] resolve as we continue to do whatever is needed to defeat this awful virus. Our approach to announcing the next set of measures has been a careful process. We will make the decisions that continue to save lives and protect the NHS — proceeding with maximum caution and maximum conditionality”, the source pointed out.

This followed Johnson pledging earlier this week that the UK will conduct at least 200,000 coronavirus tests a day by the end of this month and “then to go even higher”.

"A fantastic testing regime is going to be absolutely critical to our long-term economic recovery”, the PM underscored.

The statement was preceded by Labour leader Sir Keir Starmer’s criticism of Health Secretary Matt Hancock's earlier policy of reaching 100,000 COVID-19 tests per day in the country. Starmer asserted that despite Hancock's claims, the number of daily tests had fallen every day since April.

The comments came after Johnson promised on 30 April to deliver a "comprehensive plan" the following week on how to effectively ease the lockdown after declaring the UK has passed the peak of the coronavirus flare-up. He made the remarks at his first Downing Street press conference after recovering from COVID-19 earlier in April.