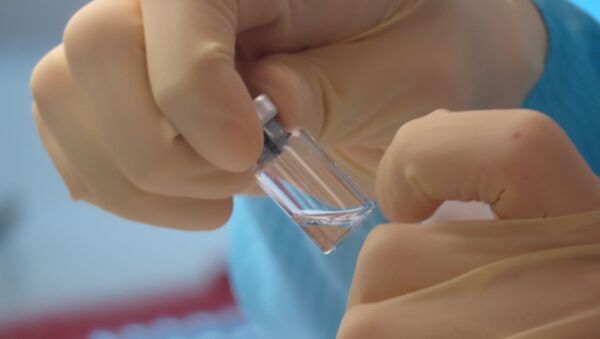 MOSCOW (Sputnik) – Numerous biotech and pharmaceutical companies are working around the clock, conducting preclinical and clinical trials to find the ultimate weapon against the coronavirus — a vaccine — that will be able to end the current pandemic.

In late April, the World Health Organisation said it had received more than 100 COVID-19 candidate vaccines, with seven in human testing already. Now the race is not only against the virus itself, but against time, as COVID-19 is spreading across the globe with great speed and ferocity. As of Saturday, COVID-19 has infected over 3.3 million people worldwide and claimed more than 238,000 lives, according to Johns Hopkins University.

While many scientists say that it may take up to 18 months for a vaccine to be developed, approved, and become ready, many pharmaceutical companies are preparing to fast-track the process. Sputnik managed to reach some of the producers to talk about the progress they have made.

This week, Arcturus announced positive preclinical data for the vaccine candidate. Plus, the company says that it has become the first US company to report data on seroconversion, a specific period during which a certain antibody develops and becomes detectable in the blood. The next phase – human trials – is about to start in Singapore this summer. At least 76 volunteers, including the elderly, are to take part. 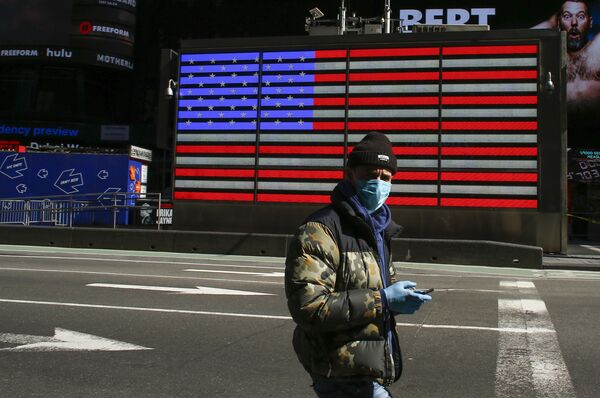 A man wears a face mask as he checks his phone in Times Square on March 22, 2020 in New York City. - Coronavirus deaths soared across the United States and Europe on despite heightened restrictions as hospitals scrambled to find ventilators
© AFP 2022 / Kena Betancur

"That's a very good thing if you can manufacture a large amount, and the dose is very tiny, then you can generate a lot of doses very quickly", Joseph E. Payne, the president and chief executive officer of Arcturus Therapeutics, told journalists.

To understand the amount of dose for the vaccine, one can take a one-litre milk bottle. All the vaccines for the population of the United States — 500 million doses — can be put in this bottle, Payne says.

"What's extraordinary is that [the vaccine] is a very low dose and you can make this much of it", he said.

Another specific feature of the vaccine is that it is devoid of any viral elements, including viruses, viral vectors, adjuvants, or coadjuvants.

"Even though it's an elegant and sophisticated vaccine, it's not a complicated one", Payne said, adding that the vaccine shot would be similar to an anti-flu vaccine.

India, which is among the world’s largest vaccine producers from the Southeast Asia region and home to half a dozen major vaccine makers, is also gearing up for the much-needed COVID-19 vaccine. Among the country's companies to announce a bid is Bharat Biotech, a leading vaccine and bio-therapeutics manufacturer, which has already commercialised 16 vaccines, including one against the H1N1 flu that caused the 2009 pandemic.

Together with virologists at the University of Wisconsin–Madison, and the FluGen vaccine company, Bharat Biotech started tests and developments of the vaccine, called CoroFlu®. The developers explain that it "will build on the backbone" of FluGen's flu vaccine candidate.

Apart from many vaccines developed against COVID, CoroFlu® will be delivered intranasally since this route mimics the natural one of infection by the coronavirus, the developers say, adding that such a way is more effective and induces more immune responses than intramuscular shots. 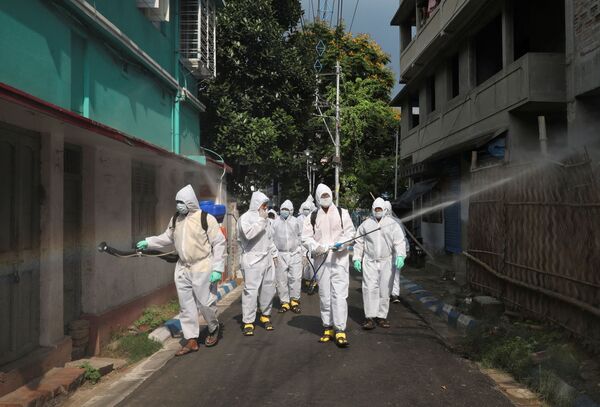 "If we achieve success in every single phase of the vaccine development during the animal trials, human clinical trials, achieving world-beating efficacy, and safety standards, we will be ready to approach regulatory authorities for licensing", Dr. Krishna Ella , Chairman & Managing Director, Bharat Biotech International Right.

The vaccine is currently undergoing animal trials in the United States. Human clinical trials in India are due to start in the next four to six months.

"Our goal is to have a human vaccine ready by the end of 2020 or early 2021, if we can meet our vaccine development milestones, clinical trial outcomes, and regulatory approvals. As a company, we are manufacturing, ready to deliver 300 million doses of vaccine annually", she added.

Canada's Medicago: Virus-Like Particle That Will Not Make Anyone Sick

Medicago, a biopharmaceutical company headquartered in Quebec City, Canada, is currently developing a vaccine based on the so-called Spike (S) protein. This protein is found at the surface of the coronavirus and seems to be the best target for the immune system to develop a protective response, according to the company,

"In the case of Medicago's vaccine candidate, the S protein is presented in the form of a virus-like particle (VLP) that resembles the real virus but is an empty shell, i.e. it doesn’t contain the genetic material required to be infectious", Senior Director at the Scientific and Medical Affairs at Medicago Nathalie Charland told Sputnik.

She explained that this particle would not make someone sick because it "lacks core genetic material".

"Instead, the vaccine prepares the body with a defence (antibodies and immune cells) that can protect against the disease and its potential complications", she added.

Asked about possible problems on the way to developing the vaccine, Charland admitted that hurdles were likely to arise, but that it is a part of standard product discovery and development.

Charland agrees that it is not possible to predict the outcome of their research until human trials start. The company is now conducting preclinical testing of the vaccine in animals. Once it is over, the company plans to discuss human trials which it expects to complete by the end of the year.

"Human clinical trials will be designed to test the efficacy and safety of Medicago's COVID-19 candidate vaccine in accordance with the health authorities’ guidelines and recommendations", she added.

As of now, China has more leading COVID-19 vaccine candidates than any other country. One of the companies that announced the start of human trials in April is Beijing-based Sinovac Biotech, a leading provider of biopharmaceutical products in the country.

The vaccine developed by the company does not have "the active ingredient", according to a statement provided by the company's media relations department to Sputnik. It is made by "chemical treatment", which causes COVID-19 "to lose the infectivity and replication power".

"At the same time, the virus retains the antigenicity and can induce the human immune response. In addition, the vaccine contains adjuvants to enhance the quality of the response", the statement said. 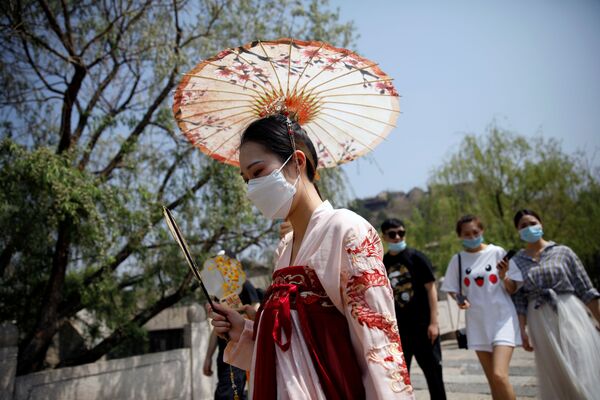 Meanwhile, the company admits that on the way to success it may face multiple obstacles.

"One of the critical success factors is to be able to establish so-called animal model. Sinovac is the first company among vaccine makers that successfully tested the animal model and reported results on April 19. The experiment shows that the vaccine candidate, used in the model, successfully protects the vaccinated monkeys, while unvaccinated animals develop the Covid-19 disease," it added.

The company refused to draw a parallel between the potential COVID-19 and current anti-flu vaccines.

"Whether this vaccine becomes like a seasonal anti-flu vaccine is not clear either. The composition of the flu vaccine is updated yearly because the flu virus changes every year, but regarding the SARS-COV-2 virus the evidence is unclear", it added.

Europe is also joining forces to stand against the deadly coronavirus. Italy's ReiThera, Germany's Leukocare, and Belgium's Univercells have recently tied up to accelerate the development and mass production of the adenoviral vector-based vaccine.

The consortium is preparing for a COVID-19 first-in-human trial which is due to begin in summer this year. If successful, the companies plan to start large-scale vaccine production this year and to manufacture some six million doses of the vaccine early in 2021.

"Our intention with these initial doses is to vaccinate the most exposed people such as medical and healthcare professionals and highly vulnerable individuals, based on the Phase 1/2 clinical results and a path agreed with regulatory authorities", Eva Bauer, a spokeswoman for Leukocare, told Sputnik.

According to Bauer, vaccines based on adenoviral vectors were extensively evaluated during the clinical trials. The evidence indicates that these vectors are safe, well-tolerated, and "induce robust immune responses from a single dose", she added. 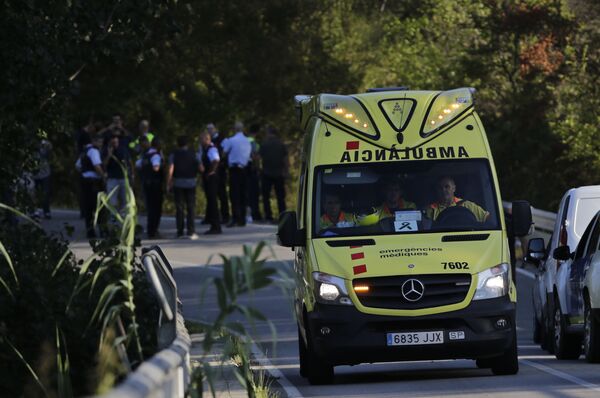 Europe has been the active centre of the COVID-19 pandemic since mid-March. According to the European Centre for Disease Prevention and Control, Europe has over 1.3 million cases, with the majority of them being recorded in Spain, Italy, the United Kingdom, Germany, and France. Europe also has also reported the majority of COVID-19 deaths — nearly 135,000. However, the number of active cases in European nations is beginning to fall, and some countries are looking at easing lockdown measures over the coming weeks.