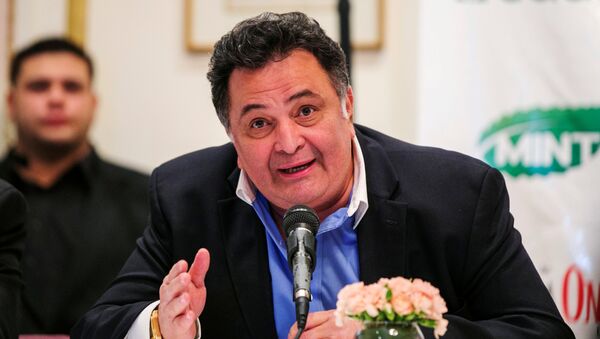 New Delhi (Sputnik): In its glorious diversity, there is one place India always comes together– the silver screen. This week, when mentally and emotionally fragile Indians enter the 35th day of the nationwide lockdown, Bollywood bleeds at the loss of yet another superstar – Rishi Kapoor, just a day after actor Irrfan Khan passed away.

Born into the Kapoor family of Bollywood royalty in 1952, Rishi Kapoor followed his legacy into the entertainment business at the young age of 16, and quickly received recognition as a superstar in the making.

In 1973, when he starred as the lead actor in the film “Bobby”, a musical romance, the actor redefined the embodiment of the modern-day “Prince Charming” in India.

At the age of 67, last week, Rishi was hospitalised in Mumbai after he complained of breathing problems. The actor had also been battling cancer since 2018. After extended treatment in the US, the award-winning actor returned to India last year.

On Thursday morning, megastar Amitabh Bachchan, who shared the screen with Rishi in several superhit films like “Amar Akbar Anthony” and “102 Not Out”, was one of the first members from the film fraternity to confirm the news on Twitter. “Destroyed”, Amitabh wrote on his Twitter post, numbered T-3517, only to delete it later for unknown reasons.

@SrBachchan announced the demise of @chintskap saying he was "destroyed" and now, his tweet is deleted.

Just when Amitabh's deleted tweet started creating ripples over the veracity of the news, the Kapoor family issued an official statement confirming the “peaceful” demise of the beloved actor.

“Our dear #RishiKapoor passed away peacefully at 8:45am IST in hospital today after a two-year battle with leukemia. The doctors and medical staff at the hospital said he kept them entertained to the last", the statement said.

​What followed was a plethora of tributes, pouring in from celebrities and fans from around the world, expressing their heartfelt tributes for the screen wizard. Indian political figures like Prime Minister Narendra Modi, Rajnath Singh, Ravi Shankar Prasad, and Rahul Gandhi along with actors like Priyanka Chopra Jonas, Parineeti Chopra, Swara Bhaskar, and others expressed their grief-filled shock on Twitter.

Multifaceted, endearing and lively...this was Rishi Kapoor Ji. He was a powerhouse of talent. I will always recall our interactions, even on social media. He was passionate about films and India’s progress. Anguished by his demise. Condolences to his family and fans. Om Shanti.

This is a terrible week for Indian cinema, with the passing of another legend, actor Rishi Kapoor. A wonderful actor, with a huge fan following across generations, he will be greatly missed. My condolences to his family, friends & fans all over the world, at this time of grief.

Anguished by the passing away of noted film actor Rishi Kapoor. He carved a special place in the hearts of his fans with his inimitable style and performances. My thoughts are with his family and fans in this hour of grief. Om Shanti.

My heart is so heavy. This is the end of an era. #Rishisir your candid heart and immeasurable talent will never be encountered again. Such a privilege to have known you even a little bit. My condolences to Neetu maam, Ridhima, Ranbir and the rest of the family. Rest in peace Sir. #rishikapoor

This cannot be true! Rishi sir was my favourite man,and favourite co-star ever! I still remember being nervous around him in Shuddh Desi Romance. He would put me at ease and treat me just like a friend! Will never forget every advice, every joke he told.❤️ #RIP #RishiKapoor pic.twitter.com/dfIi935I0v

Unspeakable grief. Another legend passes away! Blessed to have worked briefly with #RishiKapoor sir in ‘Aurangzeb’ -a great actor, he was as engaging a ranconteur! An artist whose craft grew & sustained across generations! #RIP sir!
There cannot will not be another like you! pic.twitter.com/IOCcqWS35p

Rishi was born with Bollywood flowing in his veins. His grandfather, Prithiviraj Kapoor and his father Raj Kapoor were some of India's first-ever legendary actors.

Following his family legacy, in his more than 45-year career, Rishi featured in over 121 films. In 1973, after he established himself as the “heartthrob” of India, he went on to do iconic Bollywood films like Karz, Prem Rog, Sagar, Chandani, and Henna. He made his fans fall in love with the idea of “romanticism” and took them to extremes with his acting and onscreen presence.

His last film, a love-hate story of an old father-son duo was also one of a kind. Released in 2018, “102 Not Out” saw Rishi playing the role of an irritated 75-year-old son, whose 102-year-old father – Amitabh Bachchan – likes to live like a youngster and wants to break the record for the oldest man living on earth.

​"Give me meaty roles, and I'll sink my teeth into them!", the actor once said.

Love Life of a Lover Boy

With great looks, comes great attention. The actor was allegedly involved in love affairs with several Bollywood actresses including the leading lady of “Bobby” – Dimple Kapadia and B-town beauty Yasmin. On screen he played romantic leads in over 90 films, more than 30 of which were blockbusters.

In 1980, Rishi tied the knot with actress Neetu Singh in a big fat Indian wedding, and crushed his female fans for life.

Rishi's married life, however, remained in the public eye after he openly confessed that he'd been a selfish husband in their marriage. Rishi once admitted blaming his wife for his bad days and also refusing a film with her because her role was more prominent.

Until his last day, his wife Neetu, who ended up quitting her acting career after their marriage, stood by him. An active Instagrammer, Neetu kept people updated on Rishi’s health even when they were in the US for his cancer treatment.

How I have to convince him for a pic reminding him I’m not a fan 🤦‍♀️ minestrone soup :::cherry tomatoes :::and that perfect Italian coffee that hits the spot 😋

In March, after the lockdown was announced, she also shared a cute video of Rishi sitting in front of the television and following exercise instructions.

In his film debut, at 16, when Rishi played a small role in the legendary Bollywood film “Mera Naam Joker”, he received the National Film Award for his role as a child artist. That was just the beginning of a flurry of prestigious awards the actor won, for his unmatched contribution to the Indian film industry.

Apart from India, Rishi was very loved and welcomed in Russia. When Rishi flew to Russia to be part of the first BRICS Film Festival in 2016, he revealed on stage that Russia has been close to his family. He also shared he was allowed to enter the country visa-free when he tagged along with his father to shoot “Mera Naam Joker” in 1970.

Give me a smile, I can keep all the while
In my heart while I go away

Till we meet once again, you and I
Wish me luck as you wave me goodbye

Fans from around the world are mourning the loss of this great entertainer. Twitter, Instagram, Facebook, and WhatsApp apps are filled with messages to the late actor.

Waking up to a news like this is gut-wrenching! Flabbergasted by the demise of the veteran actor #RishiKapoor ji loved by millions of folks over the world.Your inimitable style, brilliance,smile & joie de vivre..will be dearly missed,Your legacy will live for generations to come. pic.twitter.com/OeO0OGxcwi

It's really difficult to accept..another dark day for all of us. Sad news again from bollywood.The multitalented actor, producer, director #RishiKapoor ji left us. My heartfelt condolence to the family, may all mighty give stregthn through this difficult time. .
Rip sir ❤ 🌼 pic.twitter.com/dNpKWtldlq

​The actor is survived by his wife, daughter Riddhima and son Ranbir Kapoor. Just like his father, grandfather, and great-grand father, Ranbir is also a superstar and Bollywood heartthrob.