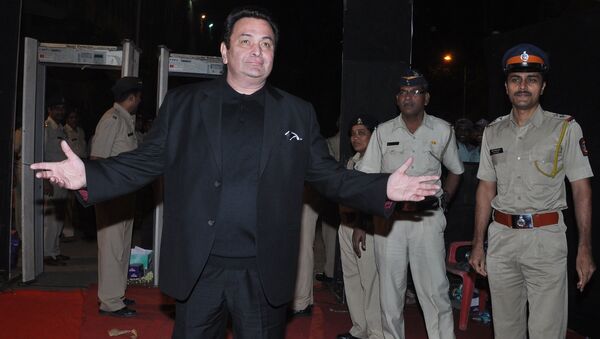 © AFP 2021 / STRDEL
Subscribe
Kapoor returned to India n September after undergoing cancer treatment in the United States for almost a year. The 67-year-old actor had been admitted to the hospital several times this year, suffering from an "infection", according to his family.

Famous Indian actor and filmmaker Rishi Kapoor died on Thursday from complications with cancer. His brother, Randhir Kapoor confirmed the news, saying that the actor died at the Sir HN Reliance Foundation Hospital in Mumbai. According to reports, Kapoor's wife and actor Neetu was by his side during his final moments.

"It's true that he has been admitted to the hospital. He is in Sir HN Reliance Foundation Hospital. He was not keeping well and had some problem, so we admitted him early this morning", Randhir Kapoor said.

"This is a terrible week for Indian cinema, with the passing of another legend, actor Rishi Kapoor. A wonderful actor, with a huge fan following across generations, he will be greatly missed. My condolences to his family, friends & fans all over the world, at this time of grief", MP and ex-head of the Indian National Congress Rahul Gandhi commented.​

Sadden to hear about demise of veteran actor #RishiKapoor, the legend who ruled over the hearts of millions.
My heartfelt tribute to him. He will always be in the memories.#RIPLegend pic.twitter.com/85n8M7Cgmw

​Kapoor received a national film award for his debut role as a child artist in his father's 1970 movie Mera Naam Joker. He also participated in numerous Indian hits such as Laila Majnu, Rafoo Chakkar, Sargam, Karz, Bol Radha Bol, and others. Kapoor's last role was in Emraan Hashmi's remake of the Spanish film The Body.

The actor had also recently announced his next project, a remake of the Hollywood movie The Intern, also featuring famous actress Deepika Padukone.