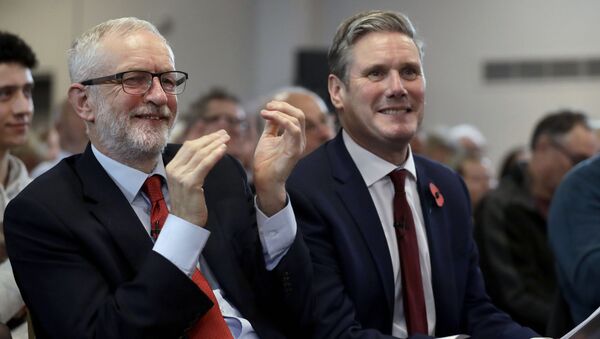 © AP Photo / Matt Dunham
Subscribe
Jeremy Corbyn stood down as leader of the Labour Party in April following the 2019 December general election defeat. Under his successor - Sir Keir Starmer - ardent supporters of Corbyn have found themselves struggling to promote a socialist vision for the party.

A Labour-Party supporting campaign group announced the formation of 'Momentum Internationalists' on Tuesday to promote "radical and meaningful" policies as the party seeks to move on from the Corbyn years.

The group announced that it aims to rebuild the pro-Corbyn group Momentum around the ideas of "Democracy, Class Struggle, Internationalism". As well as combating "widespread disillusionment" with the party's new leadership.

They pledge to promote the "democratisation" of the Labour Party by campaigning for "thoroughgoing structural changes including open selection" and to push radical policies internally.

"We hope that Momentum Internationalists can help build a bolder, more effective socialist vehicle for the Labour left."

Abbie Clark and Abel Harvie-Clark on the launch of Momentum Internationalists: https://t.co/OGSU001poP

​As the UK faces the coronavirus crisis, the group said it opposed a return to normal while "capitalism is tearing our climate and our societies apart".

The campaign group is calling for an "internationalist Labour movement and Momentum" which includes supporting workers and oppressed minorities around the world.

"The struggles of low-paid, virus-exposed ASOS workers in Barnsley should be linked across the supply chain to those of garment workers in countries like Bangladesh, India, China, and Vietnam", its website reads.

The organisation calls for momentum to "stand for socialism" in response to a crisis which it predicts will lead to mass social upheaval.

"We are facing an unprecedented economic crisis. In the coming period, there will be huge struggles over unemployment, housing, poverty, migration and climate refugees", it added.

"The route to a better world is through working class self-organisation. This means turning Labour and Momentum into organisations that can actively participate in a struggle, rather than seeing politics as a series of parliamentary manoeuvres and internal elections, or waiting until the next election", it says.

Momentum Internationalists have pledged to cease reliance on elected MPs and instead work within trade unions and grassroots organisations.

The announcement follows a significant rupture within Labour after revelations emerged that internal opposition to former leader Jeremy Corbyn included actively working against the party's electoral chances in the 2017 general election.

WhatsApp messages show key staff, including former General Secretary Iain McNicol, actively withheld information from the leadership and expressed frustration that the party did better than expected in the first election under Corbyn.

This has led to a backlash from the left-wing membership, many of whom joined the Labour Party under the Corbyn leadership.

Jon Lansman, who leads the pro-Corbyn campaign group 'Momentum', said the party needed to be a force for change.

We need to make the new BAME Labour a real self-organised force for change, & to use both education and discipline wherever we have to, to end sexism & racism of all kinds, against people of colour, Moslems, Hindus, Jews & Sikhs, as well as to protect gay & trans rights.

​Labour leader Sir Keir Starmer has launched an "urgent" inquiry into the report.