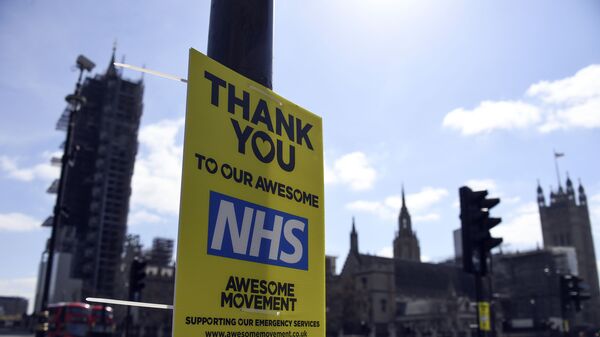 © AP Photo / Alberto Pezzali
Subscribe
Ministers claim shortages of PPE are caused by global supply issues - however, UK wholesalers have revealed their warehouses are already full of millions of pieces of PPE bought from China, which are now being delivered to Europe for use by frontline health workers on a daily basis.

Vast quantities of vital personal protective equipment (PPE) are shockingly being shipped from British warehouses to Germany, Spain and Italy despite severe shortages at home, The Telegraph has revealed.

Trucks are crammed with essential PPE, including masks and respirators, upon arrival from other countries, most prominently China, before being dispatched to hospitals in the EU.

The firms involved however say they have “no choice” but to keep selling lifesaving equipment abroad because their offers of help have been repeatedly ignored by Whitehall - despite growing controversy over an alleged PPE shortage crisis in Britain, with hospitals almost out of critical paraphernalia, and doctors forced to choose between exposing themselves to coronavirus or letting patients die.

Please @bbclaurak ask the question during today’s #Coronavirus briefing Why is UK shipping PPE to Europe yet sending planes to Turkey to get PPE for NHS? #NHSworkers are dying due to little /no protection and others told to wash used PPE! What the hell is going on @MattHancock

​Three lorries registered in Italy arrived in the UK 19th April at a warehouse owned by Veenak International, a Birmingham-based pharmaceutical wholesaler, where they took delivery of 750,000 surgical masks before heading back to the continent. The week prior, the firm packed five million surgical masks, over a million FFP2 respirators and half a million FFP3 respirators stored inside three warehouses in Birmingham and outside Heathrow Airport onto trucks registered in the European Union.

The company, which distributes pharmaceutical products across the UK and Europe, buys PPE from factories in China and takes a new delivery every week. It reportedly has millions of pounds' worth of PPE in its warehouses at present - in an ironic twist, photographs taken inside the Veenak warehouse show boxes of PPE bought from China emblazoned with inspiring messages for their UK customers.

“British keep fighting! You are not the only one that is fighting, we will be with you! We are waves of the same ocean!” the boxes read.

Veenak International chief executive Shan Hassam didn’t wish to discuss commercial arrangements but added the firm was “very patriotic” and “wanted to do all we can to help the NHS”, standing ready to prioritise British customers “if given the opportunity to do so”.

This clip, just recorded, is remarkable. According to @MattHancock, the UK *is* a member of the EU PPE scheme but that not one item of EU #PPE has arrived in the UK. I find this impossible to believe.👇🏻 @vonderleyen @TerryReintke @guyverhofstadt #COVID19 #CoronaVirus #PPEshortage pic.twitter.com/11OVdMM91u

​Separate analysis by The Telegraph appears to show a significant decline in the supply of PPE, with the number of items delivered 19th April down by over 50 percent a week and a half ago. On a conference call with manufacturers 19th April, Cabinet Office officials admitted gowns would now need to be made in the UK amid a global shortage of necessary fabrics and machinery.

That same day, a diplomatic row between London and Ankara after an RAF plane was dispatched to pick up 84 tonnes of lifesaving equipment - Turkish officials claimed the UK only submitted a formal request for the shipment the day prior, while Whitehall attributed the delay to “problems on the Turkish end”.

In March, the EU imposed an export ban on certain medical protective equipment in a bid to maintain sufficient supplies in the bloc. In the US, Donald Trump has banned “unscrupulous profiteers” from exporting critical medical equipment used to protect against coronavirus, although restrictions on exports to Canada and Mexico have since been relaxed.