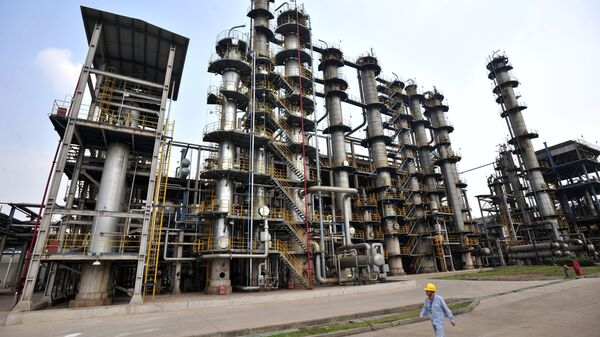 The OPEC+ deal has provoked mixed reactions among oil market players. In Asia, oil prices rose in morning trading on 13 April after a new phased mechanism to reduce oil production was approved a day earlier by 23 oil-producing countries.

Generally, global oil prices didn’t show very much in the way of gains on Monday, sinking into the “red zone” after a steady increase at the start of trading.

The market’s first reaction to the OPEC+ decision was a 4-5-percent increase in June and May futures for North Sea Brent crude. Then the price fell below the closing level of trading on 9 April.

The new output cuts stipulated in the OPEC+ deal are some of the largest ever seen and come in the wake of one of the most severe blows to demand experienced by the oil industry. This slump in demand has been facilitated by the COVID-19 pandemic and its fallout on the global economy.  In May-June, the parties to the OPEC+ agreement will reduce production by 23 percent from the October 2018 level.

The total reduction will be about 10 percent of global supply. Experts believe that as a result, a certain level will be set, below which oil prices won’t fall even in the event of a sharp drop in demand due to the COVID-19 pandemic. Global fuel consumption has already fallen by 30 percent due to the pandemic.

The agreement to reduce oil production should help stabilise energy and financial markets. Ultimately, this creates more favourable external conditions for restoring the Chinese economy, Huang Xiaoyong, Head of the Centre for International Energy Security at the Chinese Academy of Social Sciences, said.

"The pandemic has caused global oil consumption to decrease significantly, far exceeding the expected production decline. Therefore, the agreement’s main role is to either slightly increase the global oil price or stabilise the current oil price to prevent its further decline. However, this agreement shouldn’t be expected to significantly increase oil prices. In addition, the agreement to reduce oil production also plays a role in easing panic in the global economy, which can stabilise the global energy and financial markets to a certain extent. China is currently the most successful in controlling the pandemic; its economy is gradually recovering. Therefore, the agreement to reduce oil production directly corresponds to the interests of stabilising the energy and financial markets, as well as China’s search for ways to restore its economy".

The OPEC+ agreement, which a number of other oil producing countries are ready to join, is a compromise that has both pros and cons. It suits everyone, including China, Mikhail Belyaev from the Russian Institute for Strategic Studies noted.

"China needs stability and an understanding of the prospects of the global oil market. The OPEC+ agreement provides such stability and therefore suits China’s interests. As an oil producer, China is interested in high oil prices. This is important from the perspective of modernising and refinancing the oil industry. As an oil consumer, China needs a lower price; besides, an economic crisis is always easier to overcome with low prices. China managed to buy oil at the lowest prices, so in the near future, it will rely on these reserves. This will help overcome the economic decline. But this won't be a period of very rapid development, so China won’t be too active in the oil market. Recovery activity will come later, and then, at a new stage, the curve of China’s oil demand will go up. On the whole, consistent and predictable actions on the global oil market can be expected from China".

Cheap oil is beneficial for China. However, it is no less interested in the absence of geopolitical crises and regional conflicts associated with sharp fluctuations in global oil prices, Xu Qinhua, Head of the Centre for International Energy and Environment Strategy Studies at RUC, said.

Why Don’t Oil Prices Show Steady Growth After New OPEC+ Agreement?
"Only through multilateral cooperation can joint efforts to counter the pandemic’s impact on the global oil market be successful. Only when the epidemic is over, the global economy will recover, oil consumption will increase, and global oil prices will really recover. As for China, as the largest oil importer, we hope to maintain stable oil prices, as well as fluctuations within certain limits. The relatively low oil price is definitely useful for us, but we no longer want to see geopolitical crises or regional conflicts caused by serious price fluctuations. We hope that the oil price will not only satisfy a huge number of consumer countries, but also guarantee the profits of producing countries and supplier countries. At the same time, no country wants to see a sharp fluctuation in global oil prices, especially the possible negative effects of these fluctuations. Therefore, China’s behaviour on the oil market will be linked to its hopes of protecting even greater stability in global oil prices", she said.

The OPEC+ agreement to reduce oil production was approved by Russian President Vladimir Putin, US President Donald Trump, and King of Saudi Arabia Salman bin Abdul-Aziz Al Saud. They held a three-party phone call. Later, in a telephone conversation with Vladimir Putin, Donald Trump thanked the Russian president for working with Saudi Arabia and other oil producers, which has reassured global energy markets.