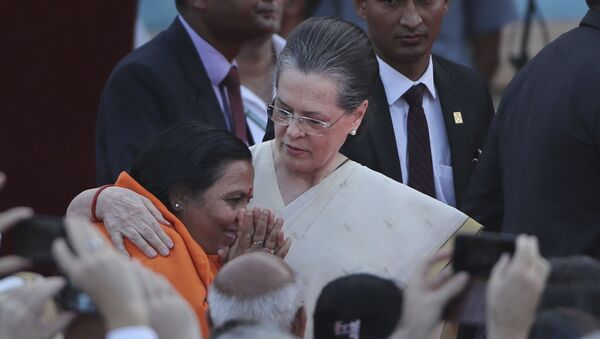 New Delhi (Sputnik): The COVID-19 pandemic has claimed 114 lives in India. To stop the disease, India is currently in a state of complete lockdown until 14 April. With the 21-day curb’s expiration a week away, Prime Minister Modi recently sought suggestions from state and party chiefs about how to act in a post-lockdown scenario.

India's principal opposition party, Congress, has urged Prime Minister Narendra Modi to take up a slew of austerity measures to accumulate funds worth about $5 billion to for the country's COVID-19 fight.

In a letter to the Indian prime minister on Tuesday, Congress President Sonia Gandhi suggested that Modi put on hold all foreign visits by government functionaries, including that of the PM himself.

"All foreign visits, including that of the prime Minister, union ministers, chief ministers state ministers and bureaucrats must be put on hold. Exceptions can be made in case of special emergency or exigency in national interest to be cleared by the prime minister", Gandhi stated in her letter.

She also called for putting on hold Modi's ambitious Central Vista Project under which a new parliament is proposed to be built in Delhi at a cost of $2.66 billion, which could be utilised in tackling the pandemic.

The other suggestions include transferring donations received in the PM-CARES fund announced by Modi to the Prime Minister's National Relief Fund. "This will ensure efficiency, transparency, accountability an audit in the manner in which these funds are allocated and spent", the Congress chief suggested in the letter.

Gandhi also advised in the letter to cut the government's advertisement spending on the media.

Modi recently consulted with the chiefs of all major parties on Monday and sought suggestions from them on ways to deal with the pandemic.

On Tuesday, the Indian Cabinet also decided to cut the salaries of central ministers and also that of the prime minister by 30 percent in an effort to garner funds for the COVID-19 fight.

Indian President Ram Nath Kovind, Vice-President M. Venkaiah Naidu, and governors of all the states have also taken a voluntary 30 percent cut in their salaries as a part of their contribution.