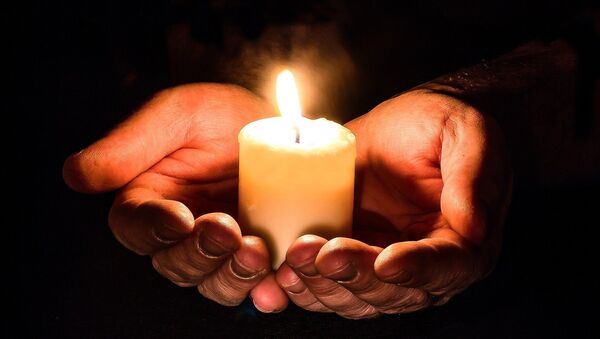 New Delhi (Sputnik): Indian Prime Minister Narendra Modi on Friday, 3 April called on citizens of the country to light a lamp outside their homes to symbolically show common resolve to fight COVID-19. This was required to experience the “collective strength” of the entire country, Modi said in a message.

1.3 billion Indians switched off the lights indoors and lit lamps as well as candles outside their homes on the call of Prime Minister Narendra Modi to symbolically show the collective strength of the country to defeat COVID-19.

Modi wanted every Indian household to turn off all lights in their homes and light a diya (lamp) to “experience the superpower of light, clearly illuminating the common purpose we are all fighting for”.

India celebrates light festival #Diwali against #Covid_19. And there are Chinese lanterns as well. #9Baje9Minutes pic.twitter.com/tY8WDdozAS

​Earlier, on 22 March, two days ahead of announcing a nation-wide lockdown, Modi asked the people to observe a “Janta Curfew”, or people’s curfew, from morning to night. It was a “symbol of our effort, of our self-restraint, and our resolve to fulfil our duty in service of the nation”, the prime minister said in his first televised address to the nation after the outbreak of COVID-19.

​The complete nation-wide lockdown announced by Modi began at midnight of 24 March and will remain in force until 14 April. Modi said that it was “a critical step in the decisive fight against the Corona Pandemic”.

​“In order to protect the country and each of its citizens, from midnight tonight, a complete ban is being imposed on people from stepping out of their homes”, he announced in his second televised address to the nation on the evening of 24 March.

Since the first case of the global pandemic was detected in India on 30 January, 83 people have lost their lives to the infection. As of Sunday, 3,577 people were confirmed to have contracted the infection, which includes 65 foreign nationals, according to the federal Health and Family Welfare Ministry.

As per data released by the federal Health Ministry, the national capital Delhi has the greatest number of positive cases (503), followed by Maharashtra (490) and Tamil Nadu (485) states. Kerala (306), Telangana (269), and Uttar Pradesh (227) are some of the states where the numbers of confirmed cases were high.

As the federal government stepped up its measures, it has banned exports of ventilators, personal protective equipment (PPE), face masks, raw materials, and test kits. The federal Health and Family Welfare ministry has also identified 20 hotspots and 22 potential hotspots in the country, but asserted that there was not any evidence of widespread community transmission.