Stalingrad: a Human Bond Between Britain and Russia 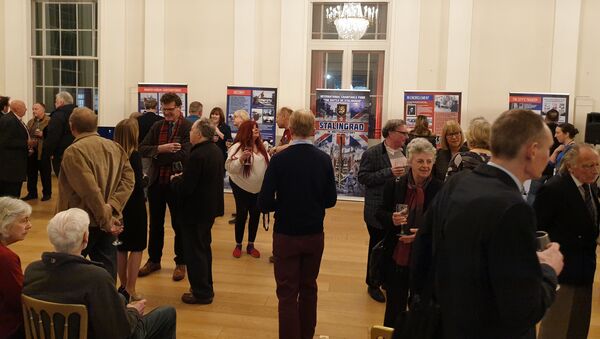 © Sputnik
Subscribe
Nikolai Gorshkov
All materials
Did you know that Clementine, the wife of the iconic British Prime Minister Sir Winston Churchill, was a distinguished Russian nurse? The title, together with an Order of the Red Banner was bestowed on her by the Soviet government for services in helping Russians survive the hardship and devastation of the 1941-1945 Nazi invasion.

Forgotten pages of the British-Russian alliance during WWII come to life in an exhibition titled “Stalingrad in British History”, currently touring UK cities in the run-up to the 75th anniversary of the victory over Nazism.

The result of long-running research by a team of historians working for a charity sponsored by the city of Volgograd (formerly Stalingrad), “The Battle of Stalingrad” exhibition is the brainchild of Dr. Dmitry Belov.

During World War II (referred to in Russia as The Great Patriotic war), Stalingrad became an important factor of social and political life in Great Britain and participated in the creation of an intimate bond between British and Soviet people.

“The United Kingdom was the only country in the world which had a massive grassroots movement to collect donations for the people of Stalingrad,” Anton Chesnokov, UK Representative of the Russian cultural ties body Rossotrudnichestvo, told Sputnik.

The Battle of Stalingrad was the largest and bloodiest confrontation of World War II, in which Nazi Germany and its allies fought the Soviet Union for control of southern Russia and its oil fields. The protracted fight was unprecedented in terms of duration and scale, and became a turning point for the war and a symbol of steadfastness and heroism of the Red Army, who, in the words of Churchill, "tore the guts out of the Nazi war machine." 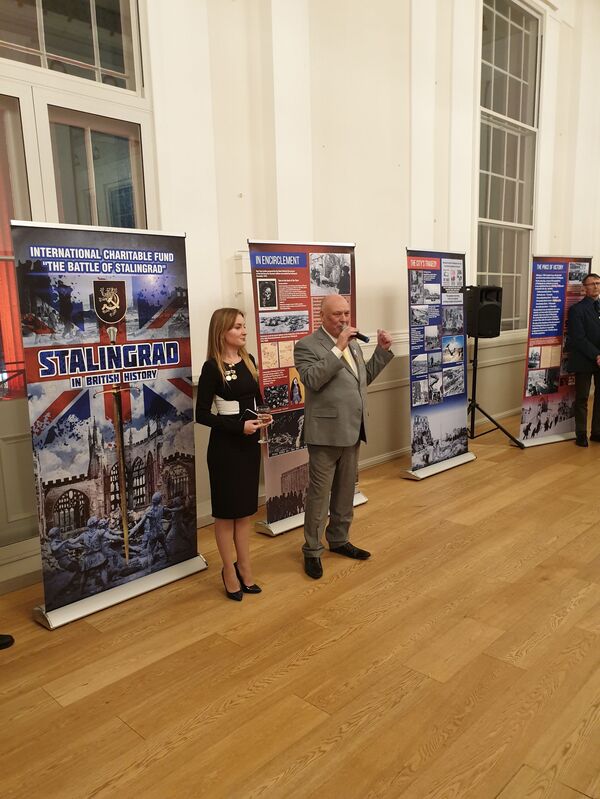 But the victory came at the loss of at least one million Soviet soldiers and an unknowable number of casualties among civilians. When the Nazi air force, the Luftwaffe, began to carpet bomb the city in August 1942 there were some 700 thousand local residents and refugees from areas overrun by the Wehrmacht. When the battle ended half a year later, just 28,000 remained, squatting in bombed-out basements. Of those who who did not perish under the constant bombing and shelling or die from hunger and frostbite, many Russians were forcefully removed to Germany as slave labour.

The scale of the devastation was witnessed by Clementine Churchill when she visited Stalingrad in April 1945.

“What an appalling scene of destruction met our eyes. My first thought was, how like the centre of Coventry or the devastation around St Paul’s, except that here the havoc and obliteration seems to spread out endlessly."

"When one is in a city like Stalingrad the staggering loss of life and suffering produced by Nazi aggression almost overwhelms one. The imagination is baffled by the attempts to encompass calamity on so vast a scale.”

As a result of their devastating war experience, Coventry and Stalingrad started the twinned, or sister, cities movement around the world.

Clementine Churchill was at the helm of the “Aid to Russia Fund”, collecting donations from British people. From October 1942 their attention was glued to the unfolding battle for Stalingrad, which eclipsed fighting in North Africa between the Anglo-American allies and the Afrika Corps of Edwin Rommel.

With the Soviet military victory at Stalingrad, the attention of ordinary Brits turned to the needs of the wounded and the sick. There was a real danger of epidemic due to a lack of hospitals and equipment. The residents of St Albans raised 700 pounds – about 32 thousand pounds in today’s money, and the Queenswood school in neighbouring Hatfield raised 600 pounds.

Locals wanted this money to go directly to the people of Stalingrad, rather than into a general pot, so the “Stalingrad Hospital Fund” was born. It aimed to collect 75 thousand pounds to equip a new hospital in Stalingrad. Within a few months, it received three times that figure in donations.

Russia Was Our Greatest Ally

Researchers of the “Battle of Stalingrad” Foundation traced 307 towns and villages across Great Britain that donated money for the new hospital in Stalingrad.

This show of support by ordinary Brits towards Russian allies has largely been forgotten, says Graham Kentsley, an entrepreneur who has for 30 years been dividing his time between his native St Albans and his adopted city of Volgograd.

“There are a lot of people in Britain that are completely unaware of the contribution the British people made by sending essential supplies to the people of Stalingrad during their long and desperate siege. Residents of St Albans and the surrounding area were probably the only ones who were sending money while the battle was still raging”

“It’s been a long-held ambition of mine to tell that story”, Kentsley told Sputnik.

Having been appointed a UK Ambassador for the International Charitable Fund “The Battle of Stalingrad”, Kentsley became the driving force behind St Alban’s participation in the roving exhibition. He also set up a radio link between Radio Verulam in St Albans and Volgograd FM to remind people in Britain and Russia of the special bond between them.

This understanding was very much prevalent in the West in 1943. While the Battle of Stalingrad was still raging the British public and politicians began to discuss what would be a worthy recognition of Stalingrad’s contribution to the defeat of Nazism. With victory at Stalingrad came the resolution: it would be a Sword of Honour, a gift from King George VI to the defenders of Stalingrad. Churchill changed the word 'defenders' to 'citizens' to pay homage to the civilians of Stalingrad, 'firm as steel' [Stalin translates as 'made of steel' – Ed]

It seems these days that those who are calling the shots in the West, politicians, journalists and historians prefer to forget, or rather, rewrite the history of WWII. But Belov has no time for them:

“I am not interested in political maneuvres around WWII, I am interested in the letters from the 307 British locations that had donated money to the Stalingrad Fund during the war. We are running a competition among the people from those locations. We have a dedicated website Stalingrad-uk.com so that everyone can join in and explain why their compatriots helped the Soviet war effort."

"My experience of dealing with these people tells me that they have a fairly good understanding about the war, about the Soviet role in it. The letters are moving. The British people did realize that the terrible devastation of Stalingrad could have befallen their own cities, they did realize that the fate of their own world was being decided at Stalingrad. They had watched the 'Stalingrad' documentary film which was given by Stalin to Churchill. It was shown at every British theatre. The ordinary Brits knew it wasn’t in their powers to open the Second front, so they decided to help in any way they could – by sending money to buy medical equipment for the sick and wounded of Stalingrad.”

The foundation ran a similar exhibition in the European Parliament in Strasbourg called “Stalingrad in the destiny of France”. Belov counted 167 places in France named after Stalingrad. French history textbooks devote full two pages to the battle of Stalingrad. Why?

"The German 6th army defeated by the Red Army at Stalingrad had taken Paris in 1940. Three of its divisions marched through the Arc de Triomphe as conquerors – and they found their end in Stalingrad. There’s a historic and emotional link between France and Stalingrad, that’s why they do not rename all those Stalingrad places in France," Belov says. 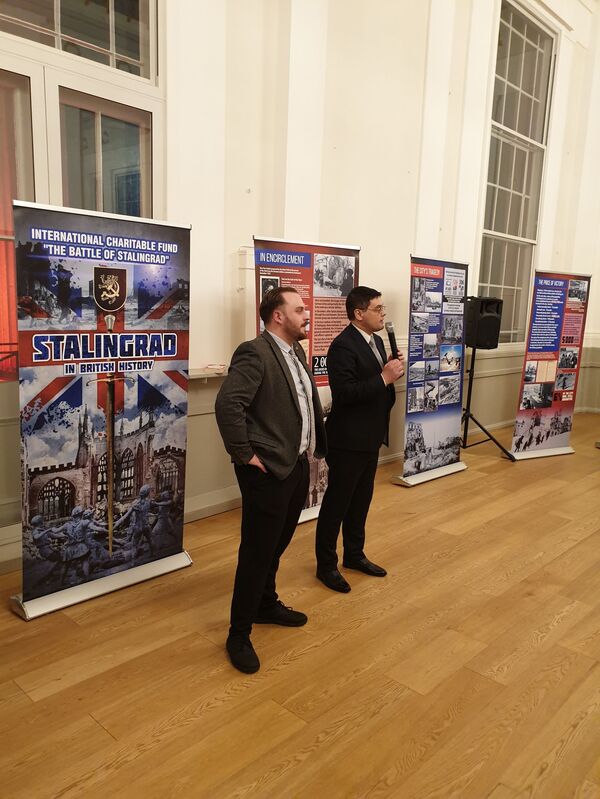 The “Battle of Stalingrad” Foundation also has a Chinese project, and Belov hopes one day he will be able to tell the story of the humanitarian aid received by Stalingrad from from Jewish and Russian communities in the United States. The aid committee was headed by one Albert Einstein, and among its members were Charlie Chaplin and Lion Feuchtwanger. Belov plans to merge all four projects together by 2023 to tell the world of the significance of this phenomenon. It is not about the action on the front lines only, he says, it’s about human suffering and human solidarity.

Such reminders of the human dimension at a local level, says Jack Pettitt, a history teacher at Verulam School, St Albans, help to make history relevant to younger generations.

“What strikes me here is that local history like this can actually help to build international bridges. This exhibition is completely breaking every stereotype that has been formed over the last 5-10 years. Exhibitions like this are super-important because they give a chance to local communities to show, understand, be aware and relish history which they are part of. It’s not just an exhibition, it’s a celebration of our common historic achievement.”

Having toured London, the St Albans and Coventry exhibition will travel to Moscow and finally to Volgograd to celebrate and cement the human bond between Brits and Russians.