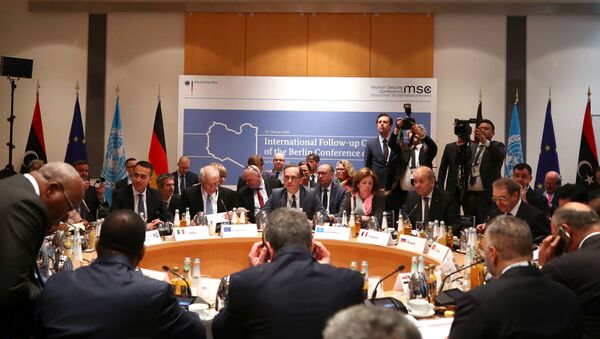 MUNICH (Sputnik) - Top diplomats from Berlin conference on Libya participant-nations and organisations on Sunday launched the International Follow-up Committee on Libya (IFCL) which looks to exert diplomatic and technical efforts to implement the agreements penned in the January conference.

“The IFCL will meet regularly under UN leadership at Senior Officials’ level in capitals and in working groups at technical level on the ground,” a statement released by the group read.

The next rotating co-chair will be Italy followed by the League of Arab State and the European Union, the statement went on to say.

On Permanent Ceasefire on Libya

The foreign ministers of Russia, Turkey, China, the US, the UK and other Berlin conference on Libya participant-nations on Sunday called on the opposing sides to accelerate negotiations for a permanent ceasefire while welcoming ongoing meetings between the two sides.

“They strongly called upon the Libyan actors to maintain the current truce and accelerate negotiations regarding a permanent ceasefire. They welcomed the first meeting of the 5+5-Joint Military Committee led by UNSMIL from the 3 to 8 February in Geneva and took note of the next meeting starting 18 February,” a joint statement read after the group met in Munich.

On Violations of Arms Embargo

The foreign ministers of Russia, Turkey, China, the US, the UK and other Berlin conference on Libya participant-nations condemned on Sunday violations of the UN arms embargo on Libya and called for more efficient monitoring, a joint statement read.

“They had a discussion on the deplorable recent violations of the arms embargo, renewed their determination to contribute to its thorough implementation and welcomed progress regarding more efficient monitoring of the embargo underway,” the joint statement, adopted after a meeting in Munich, read.

German Foreign Minister Heiko Maas, in his turn, has warned about possible consequences for those violating the embargo.

"There are different mechanisms on how to deal with that [violations]. The sanctions committee at the United Nations is one of them. But what will be important is to create transparency and make sure that those who continue to intend to breach the embargo need to know that they will be detected and that they will be named," Maas said.

He added that the issue would be discussed at the EU Foreign Council meeting the next day.

"And we will discuss the contribution the EU can make so that everybody know that if they breach the embargo that they also violate the Security Council’s resolution and this will have an effect on them," he said.

Maas also brought attention to multiple breaches of the embargo that took place in recent weeks.

"We also openly talked about the fact that, quite obviously, in the course of last few weeks there have been quite serious violations of the ceasefire agreed," the German minister stated.

Earlier in the day, a meeting of the international group on Libya took place, continuing the peace process launched by the Berlin Conference on 19 January 2020.

Munich Security Conference Hosts Follow-Up Committee Meeting on Libya - Video
The 19 January international conference on Libya took place in the German capital, counting Russia, the United States, the European Union, Turkey and Egypt among its participants. Both Sarraj and Haftar were present as well, although they failed to have direct talks with each other. The sides agreed on a ceasefire and noninvolvement of third parties in the conflict.

After the ouster and assassination of Libyan leader Muammar Gaddafi, the country was plunged into a brutal civil war. Today, Libya is divided between two centres of power — an elected parliament in the country's east, supported by the Libyan National Army, led by Khalifa Haftar, and the UN-backed Libyan Government of National Accord in the west, headed by Fayez Sarraj.