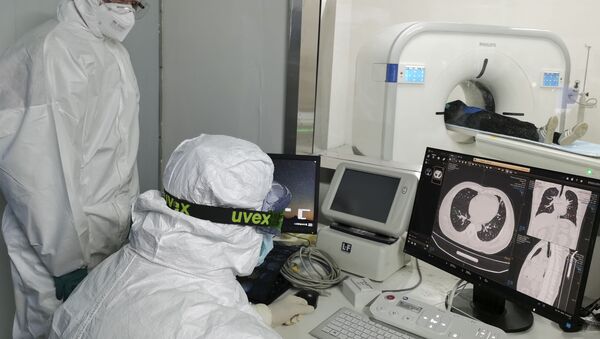 BEIJING (Sputnik) - The production of the first drug that may prove to be effective in treating the novel coronavirus was launched in China’s eastern province of Zhejiang on Sunday, the government of the city of Taizhou said.

"On February 15, the drug …. developed by Zhejiang Hisun Pharmaceutical officially received approval from the State Food and Drug Administration to enter the market. This is the first drug in the country that during the outbreak of the novel type of coronavirus received official approval for inclusion in the list of drugs that can potentially be effective in the treatment of the new type of coronavirus," the government said, adding that the production started on Sunday.

According to the government, the drug in question was formerly known as favipiravir or avigan.

In early February, China National Center for Biotechnology Development said that remdesivir and favipiravir could become a potential treatment for the coronavirus. It added that Chinese experts had also started animal testing of a number of coronavirus vaccines.

The new strain of coronavirus was first detected in China's central city of Wuhan in December and has since spread to more than 25 countries. In China, the virus has already resulted in more than 1,600 fatalities, with nearly 70,000 people infected. Outside of China, over 500 people have been infected with the virus.