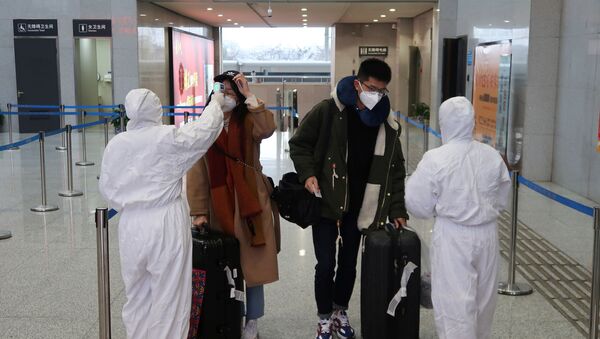 An outbreak of previously unknown pneumonia, later identified to be caused by a new strain of coronavirus, was registered in the Chinese city of Wuhan, Hubei province, in late December.

The number of people who have died from coronavirus has reached 56, and over 300 new cases have been registered in China, CCTV reported on Sunday. The total number of confirmed coronavirus cases in China stands at 1,975.

One death was registered in Shanghai, according to state media reports, the first one in the city. The patient who died was an 88-year-old man with other health issues, China Global Television Network (CGTN) reported. Another patient is reported to be in critical condition.

China's Tianjin city shut all inter-province shuttle buses from 27 January to curb the coronavirus outbreak, according to CCTV.

The first doctor died from the novel virus on Saturday and three more medics have been infected with the disease in Beijing.

A new strain of coronavirus, which the World Health Organisation (WHO) labelled as 2019-nCoV, has already been registered in Thailand, Japan, Vietnam, South Korea, Malaysia, Singapore, Macau, Nepal, France, the United States, France, and Australia.

In Wuhan, where the virus originated, the citizens were put on a travel ban. Other cities of Hubei province officially announced the suspension of transport connections over the deadly outbreak.

Additionally, two hospitals are being built in Hubei province to fight the outbreak. The quarantine zone reportedly covers 55 million people.

In Beijing, China's capital, all festivities for the Chinese New Year were suspended.

Airports globally have taken precautionary measures to screen all passengers travelling from China for the novel virus.