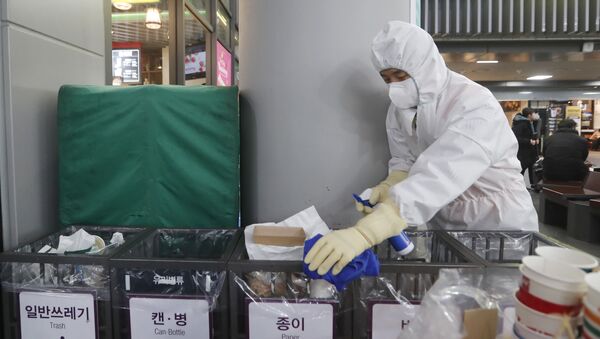 © AP Photo / Ahn Young-joon
Subscribe
International
India
Africa
An unknown type of pneumonia, later identified as a new strain of coronavirus, originated in the Chinese city of Wuhan, Hubei province, in late December and since then, has reached several other countries.

The first case of deadly coronavirus has been registered in Australia, Victoria state health officials reported on Saturday.

The patient who was taken to hospital in Melbourne, Victoria, is a Chinese national who arrived in Australia last week, Health Minister Jenny Mikakos told reporters.

"It is important to stress that there is no cause for alarm to the community. The patient is isolated and is undergoing treatment and we do not have any further suspected cases at this stage", Mikakos said.

Five more Australian citizens are being screened for the infection in New South Wales, according to information on the state's health ministry website.

Earlier in the day, the French Health ministry reported a coronavirus case - the first to be registered in Europe, the number later rose to three.

In China, the number of confirmed cases has reached 1,287, while the death toll currently stands at 47. In total, 29 Chinese provinces have been affected, China's National Health Commission says.

Since the new type of coronavirus was identified in China's city of Wuhan, other confirmed cases of the deadly virus have been reported in Thailand, South Korea, Japan, Singapore, Nepal, and the United States.

The Chinese authorities earlier confirmed the Wuhan coronavirus can be transmitted from human to human.

However, the World Health Organisation (WHO) said it was too early to declare a public health emergency of international concern "given its restrictive and binary nature".