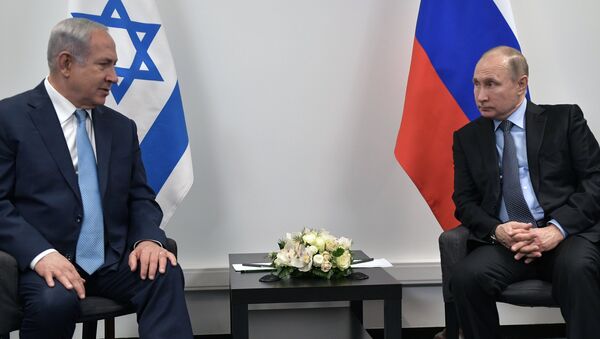 "The visit to Israel is timed to the holding of the international forum... on the Holocaust... and fight against anti-Semitism. This time the forum is dedicated to the 75th anniversary of the liberation of the Auschwitz camp by the Red Army and the International Holocaust Remembrance Day," Ushakov told reporters.

He said that during the visit Putin will hold talks "with Israeli President [Reuven] Rivlin and Prime Minister [Benjamin] Netanyahu."

Ushakov said Putin would be the first to speak at the Jerusalem forum as its main guest, adding that US Vice President Mike Pence, French President Emmanuel Macron and German President Frank-Walter Steinmeier had also been invited.

There will also be a meeting between Putin and Palestinian President Mahmoud Abbas in Bethlehem, where they will discuss bilateral cooperation and the situation in the Middle East.

"Various issues will be discussed: bilateral ones and the situation in the Middle East with an emphasis on prospects for the Palestinian-Israeli settlement," Ushakov told reporters.

A Request From Kiev

Ushakov also said that Kiev had requested a meeting between Ukrainian and Russian presidents Volodymyr Zelensky and Vladimir Putin during a visit to Israel, but the schedule of the Russian head of state is very busy, and contacts with other heads of state, if any, will be very brief.

"I said that the agenda is very tight, if there are separate meetings, they will only take place on the go and will be very brief. Of course, the president, in any case, will shake hands with the main participants [of the forum in Israel], this is inevitable. Whether there will be lengthy conversations is very doubtful, there is simply no time physically, although requests have been received, including from President Zelensky," Ushakov told reporters.

He said Zelensky's request had not been rejected.

"Offers of meetings have been received from many states, taking into account the schedule, these meetings, at least long ones, are unlikely," Ushakov said.

Putin, Netanyahu to Meet With Mother of Naama Issachar

Putin and Netanyahu will also meet in Israel with the mother of Naama Issachar, an Israeli woman serving a prison term in Russia for drug trafficking.

"After separate talks with Netanyahu, a meeting will be held involving him... between our president, Patriarch Theophilos III of Jerusalem and All Palestine and Yafra Issachar, the mother of Israeli and US citizen Naama Issachar," Ushakov told reporters.

Issachar, holding citizenship of Israel and the United States, was detained at a Moscow airport in April 2019, when she was making a layover from New Delhi to Tel Aviv. Slightly over nine grams of hashish were found in her backpack.

The young woman, later sentenced to 7.5 years of imprisonment for drug smuggling, admitted to transporting hashish but said she had no intention to smuggle it anywhere. The penalty has been harshly criticized in Israel as disproportionate since the amount of drugs found is allowed for personal use in Israel, though it is considered illegal in Russia.

000000
Popular comments
Holohoax business aside I hope Putin will knock some sense into the venal and morally corrupt Israeli political elite.

Muhammad-Aryan
22 January 2020, 17:48 GMT1
000000
Why was there no mention of a holocaust during the Nuremberg trials? Because there wasn’t any. It wasn’t a gas chamber at Auschwitz- it was a crematorium.