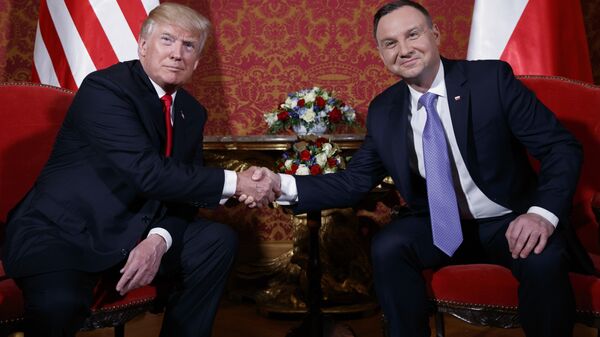 © AP Photo / Evan Vucci
Subscribe
International
India
Africa
Ilya Tsukanov
All materialsWrite to the author
Since the end of the Cold War, Poland has been one of America’s closest European allies, actively supporting various US initiatives – from trying to stop Russian-European energy projects, to assisting in the deployment of large numbers of NATO troops along Russia’s borders. But not everyone in Warsaw seems satisfied with the current arrangement.

Warsaw University professor and presidential advisor Witold Modzelewski made headlines in Polish media this week after making an unusually sharp rebuke of Poland’s US allies, and challenging other commonly-held dogmas on Polish foreign policy.

In the latest volume of a multi-part series entitled ‘Poland – Russia. 1919  - Reflections on the Past Century’, Modzelewski accused the US of trying to exploit Poland’s difficult history with its Russian neighbours.

“Humiliated and insulted by our ‘strategic partners’, who actively take advantage of the fact that we have found ourselves in political isolation and have made hatred of Russia part of our official policy, Poland is refusing to participate in international politics,” he argued.

In another part of the book, the professor goes on to suggest that Poland’s protests against Crimea’s reunification with Russia in 2014 looks “pathetic” from a historical perspective.

“Given that we didn’t protest against the movement of borders in Europe [in 1990], we should have understood that there would be further changes, because the unification of Germany laid the foundation for a new post-Cold War history in this region of the world,” Modzelewski wrote.

Therefore, he suggested, “our protests against the ‘annexation of Crimea’, which Polish governments [have vowed to] ‘never recognise’, look pathetic and resemble the complaints of a child who has been deceived.”

Modzelewski complained that the Poles were made to look like fools in Warsaw’s arms deals with the US. “We, as always, made ourselves to be idiots, spending billions on some decommissioned weapons from the Americans, who usually humiliate their clients,” he wrote.

“Today there are also those who profit off of our foolishness, scaring us with the ‘threat’ [of] ‘Putin’s Russia’. Russia ‘threatens’ us, which means we need to arm ourselves. We can’t produce the weapons ourselves, so we need to buy them from our good friends (after all, friendship requires sacrifices). But it would be interesting to know who among our politicians are truly paralysed with fear by Moscow, and who among them fears Russia for a material reward?” Modzelewski asked.

The advisor also complained about Poland’s close alignment with the US on other issues, including Warsaw’s position on conflicts in the Middle East, as demonstrated by the February 2019 Mideast peace and security summit in Warsaw.

“In the space of a few days, the Americans managed to squander the capital of [global] sympathy which had been accumulated in our country over the past century. But we know perfectly well that they’re simpletons,” he wrote in reference to the summit. Many of Washington’s European allies demonstrably failed to attend the Warsaw summit, with Iran denouncing the meeting as a “circus.”

Modzelewski is a member of Poland’s National Development Council, a collection of policy advisors which includes over 100 representatives from various fields. Asked to comment on the professor’s new book, Blazej Spychalski, an advisor to President Andrzej Duda, explained that Modzelewski is an advisor on economics, labour and entrepreneurship, not foreign policy or defence.

“I don’t know if the president has discussed foreign policy issues with him,” Spychalski said.

Modzelewski himself told Gazeta Prawna that he didn’t think anyone, particularly himself, “can influence what kind of foreign policy the president pursues.”