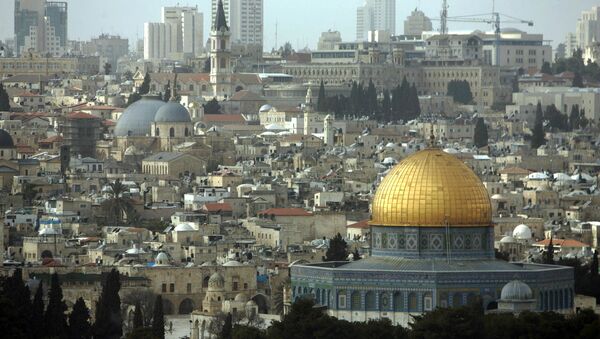 © AP Photo / Lefteris Pitarakis
Subscribe
Elizabeth Blade
All materials
Palestinians are disappointed in the two-state solution, says a Palestinian journalist, not only because of Israel's constant settlement expansion into the West Bank but also because of a US bias that underscores that Washington can no longer serve as an objective mediator.

In the US House Committee on Foreign Affairs, the Democratic majority plans to vote on a resolution that would express support for the two-state solution, the Texan reported. The vote might take place as early as this afternoon.

The two-state solution refers to a proposed resolution of the Israeli-Palestinian conflict, and supports the idea of establishing an independent Palestinian state, along with recognising Israel's right to exist.

But for many Palestinians, this measure was too little and came too late.

According to the poll conducted in September by the Palestinian Centre for Policy and Survey Research, the support for the two-state solution has declined from the previous 47 to 42 percent among Palestinians in the West Bank and Gaza, with 32 percent expressing support for a one-state solution that presupposes creating a unified state that would encompass Israelis and Palestinians alike.

The survey found that the reason behind the drop lied in Israel's constant expansion into the West Bank.

Earlier this week, Israel's Defence Minister Naftali Bennett approved the construction of a new neighbourhood in Hebron, a Palestinian city in the West Bank.

Israel has boosted construction in the West Bank since the 1967 war, after capturing the area from Jordan. Over the years, more than 250 towns and illegal outposts have been established - which are home to more than 400 thousand Jewish settlers that make up some 14 percent of the West Bank's population.

But Sanaa Kamel, a Palestinian journalist from Gaza, says Israel's expansion is far from the only reason for disappointment among Palestinians.

"Palestinians lost their confidence in the US as an honest and independent broker between Israel and the Palestinians. As a result of Washington's bias, Palestinians feel the need to punish the US and end its involvement in the conflict," she said, referring to a number of steps taken by the Trump administration that angered the Palestinians.

At first it was Washington's recognition of Jerusalem as the capital of Israel and the subsequent move of its embassy to the disputed city. Then it was the recognition of Israel's sovereignty over the Golan Heights, which are recognised as part of Syria under international law, and more recently it was the decision to scrap this US decades'-long policy on the West Bank settlements, as it no longer calls them illegal under international law.

That's why, says Kamel, Palestinians need to turn their back on the US and be opting for more objective mediators. These could be either Russia or China. "The US has shot itself in the leg by supporting the hawkish Benjamin Netanyahu's government. The Palestinian people don't hate Israel but we do despise their leaders, who deny the very basic rights of the Palestinians and we don't appreciate the US government for pushing the Palestinian leadership to accept concessions that don't sit well with the public," she said over the phone.

Yet, Kamel believes that Palestinians have also been disappointed in their own leadership and the lack of progress in the stalled unity talks between Fatah, which controls the West Bank, and Hamas, which is in charge of the Gaza Strip. The rift between the two factions occurred in 2007 after Hamas cracked down on Fatah officials, ousting them from the enclave and establishing their own control.

"Palestinians are being divided and as such they cannot come as a unified block and face Israel and the US. So before we concentrate on negotiations with Israel, we need to overcome our inner split first and solve a series of domestic problems, including poverty," summed up Kamel.

According to the Palestinian Central Bureau of Statistics, unemployment in the West Bank reached more than 17 percent in 2018. In Gaza the situation is worse, with more than 52 percent of the population unemployed. Poverty is yet another headache, with 5.8 percent of people in the West Bank and 33 percent of Gazans living in deep poverty.