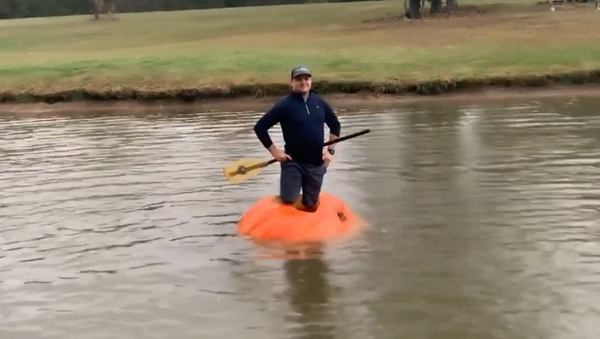 What do you do with a pumpkin that weighs more than 900 pounds? You carve it and turn it into a working vessel, of course!

Tennessee local Justin Ownby recently shocked his family and the internet after he managed to hollow out the massive gourd he’d grown, only to later turn it into a semi-workable watercraft.

Several videos and photos shared on Facebook by Ownby’s wife Christin show the Tennessean successfully testing out his new vessel on a pond near his farm, before ultimately tipping over and taking on water.

“He has tried for four years to grow giant pumpkins," Christin told local news station WTVC. "This year is his biggest at 910 pounds. We do this on our farm in Cleveland. We occasionally grow lots of pumpkins, but this year he put all of his work into the one."

Just as other sunken vessels have remained scattered throughout the seas, so to has the Ownby pumpkin. Christin went on to tell the station that the pumpkin “will make a great snack for the catfish” as it continues to float in the pond.